LASTMA and Ambode’s demand for civility in traffic management

Driving on the streets of Lagos has always been a hassle. For a city that is over ten times overpopulated and suffered decades of no investment in road infrastructure pre-1999, vehicular traffic congestion is expected to be an unfortunate part of its culture. New York, Cairo, London are just some of the few mega cities around the world that suffer from the same challenge.

However, the traffic congestion on most Lagos roads has become unbearable for many road users lately. The social media postings of many Lagosians recently have been laced with their frustrations about the situation. They complain that the trips that used to take 30 minutes now last double or triple the time. Every morning, Facebook and Twitter is filled with pictures of unhappy drivers, snailing their way to their businesses and offices. There is a lot of cyber anger out there, but unfortunately it is all aimed at the wrong guy. When former Governor of Lagos State, Bola Tinubu created the Lagos State Traffic Management Authority (LASTMA) by signing it into law in the year 2000, many residents thought it was a timely idea. Finally, an agency of the state government had been empowered to reduce deaths, injuries and economic losses from road traffic accidents, conflicts, congestion and delays on the public roads in the state by employing modern traffic management techniques. The agency also created jobs for many thousands.

LASTMA officer engaging in a free for all

Soon, most Lagosians began to see the wisdom in creating the agency. In fact, some states now have their versions of LASTMA. The officers of the agency became the most feared on Lagos roads. The fear of LASTMA became the beginning of wisdom. Every driver’s worst fear was to see a man or woman in cream-coloured shirt and maroon trousers knock on their windows or sternly ask them to park their cars on the side of the road. When that happened, you either begin talking very fast or start calling your government contact. Or, as a final resort, prepare to pay a heavy fine. No one wanted that, so most former offenders learnt to keep traffic rules. Defaulters were punished and knew not to commit the offence again. Life was getting good.

However, the story changed when certain corrupt LASTMA officers began to implement another set of rules they had written for themselves. They found a loophole in the system and exploited it mercilessly. Instead of preventing traffic gridlocks, they began hunting offenders and taking bribes. Some would create impossible situations on the roads and await unsuspecting victims. Some even tampered with traffic lights simply to ensnare innocent drivers. Cars properly parked were sometimes towed away and the owners left in distress. LASTMA officers became almost lawless; Lagos’ Enfant Terrible.

One of the first things the new administration under Governor Akinwunmi Ambode was to go did was to seek to re-brand LASTMA and re-jig its operations. Having attended countless town hall meetings and read reports from focus group discussions during the election campaigns, Governor Ambode knew the LASTMA he was inheriting needed to change to fit the vision he has for the state.

So, he ordered that all seized vehicles in the possession of LASTMA be released. The Transport Ministry also announced some new guidelines for the officers of the agency, one of which meant adopting a system where traffic offenders are booked instead of confiscating their vehicles. Oluseyi Whenu, the permanent secretary of the ministry of Transport, said the new policy is aimed at ensuring the free flow of traffic in the metropolis.

Mr. Whenu said the government was implementing a better traffic management and documentation procedure where traffic offenders are booked and given a grace period for payment and defaulters apprehended at home through the information on the motor vehicle database.

“Since LASTMA officials are a reflection of the state government, they should ensure that their activities add value to the government’s covenant with Lagos residents to make life easier for them,” he said.

Since this announcement, there has been a marked drop in the efficacy of the field officers in LASTMA. They have almost totally abandoned their duty posts. There used to be at least two sets of LASTMA officers on the Eko Bridge every morning. These days, you would be lucky to find one at his duty post between the Mainland and Ikoyi. Drivers used to avoid the BRT lanes like plagues.

These days, private car owners and Danfo bus drivers are so bold that they would use the BRT lane right in front of the Government House at Marina. No one stops them because LASTMA officers are sulking. The big babies!

That is why the city is experiencing such traffic gridlock. LASTMA has downed tools and Lagosians are suffering for it. Robberies in traffic are back. So are the heartaches that come with accidents and injuries.

It is heartening that members of the public now know whom to blame for this. The Lagos State House of Assembly has summoned the General Manager of LASTMA, Mr. Bashir Braimah, to explain the persistent gridlock. Mr. Jude Idimogu, representing the Oshodi-Isolo II, said the gridlock was as a result of the deliberate action of LASTMA officers in reaction to the demand by Governor Ambode that they behave better at their jobs. 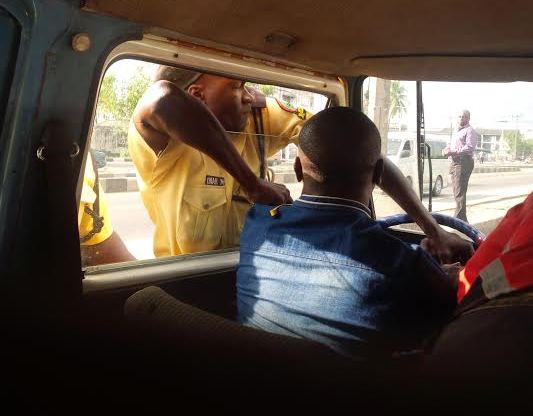 “Many of the officers will be at the traffic prone areas, standing akimbo and be watching the situation unperturbed,” Idimogu said.

Mr. Tunde Braimoh, another representative for Kosofe II went further to ask the Lagos Government to disengage the officers for displaying such behaviour.

“Now that the governor came up with a modern way of enforcement, what the officers do now contradicts their ‘modus operandi’. If there is need to drop all of them and recruit others, we have to do so. They cannot disregard the law of the House and the state,” Braimoh said.

Mr. Segun Olulade, representing Epe II said, “(The) transport situation has degenerated in the state because of lawlessness of drivers and LASTMA. I have seen some sort of collaboration in sabotaging the government. Some so called LASTMA disobey traffic laws.”

Any society that allows a section of itself to operate above the rule of law toys with danger. Lagosians must support the stance of their beloved governor that LASTMA operates with the bounds of civility while carrying out their legitimate duty. They must stand with Governor Ambode in his quest to modernise the process of traffic management in Lagos.

LASTMA should not hold us to ransom. They are not bigger than the people. Governor Ambode, please deal with them! Within the bounds of the law, of course.