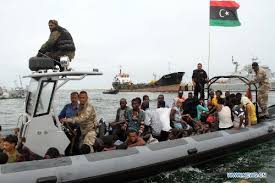 General Ayoub Qassem, the coast guard spokesman, said 431 people on inflatable crafts were rounded up between Thursday and Saturday at sea off the town of Sabratha, 70km west of the capital Tripoli.

The action of Libya came a day after EU leaders agreed on moves to curb mass migration from the country.

“The migrants are of different African nationalities and there are a great deal of women and children among them,” he said.

Italy’s coastguard said Thursday that more than 1,750 migrants had been rescued in the Mediterranean within 24 hours.

Around 230 people have died en route to Europe since the start of 2017, according to the United Nations.

It should be noted that, lawlessness in Libya since a 2011 uprising, that ousted long time strongman Muammar Gaddafi, has allowed smuggling networks to develop a lucrative trafficking trade in the North African region. Play the y8 games, relax, have fun. Play the y8 girls games of Mario, Winx, race, guns. The most popular collection of y8 games online.

The Blind Set to vote with Braille In Rwanda