Magnus Abe writes Buhari over allegation of politicization of security 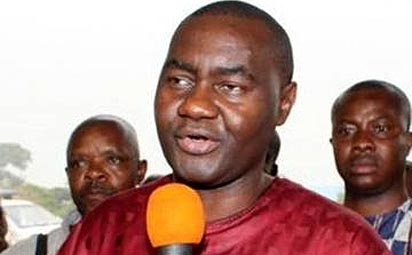 in the March 28, 2015 National Assembly Elections: Our Response

I respectfully write this letter as a response to the malicious and baseless petition written to you by members of the Peoples Democratic Party (PDP) in Rivers State in the National Assembly, alleging and pointedly accusing myself and some members of our party, All Progressives Congress (APC) in Rivers State of politicizing the Nigerian Army and the Directorate of State Security by making them to testify in our favour before the Election Tribunal that is currently hearing the various petitions filed by myself and my colleagues against the National Assembly elections in Rivers State held on 28th of March, 2015.

The said petition written to you by the PDP was severally published in both print and online media. I therefore write this response for myself and on behalf of all the APC candidates that contested the election and who are also presently petitioners in their respective petitions against the elections, pending before the Election Tribunal, sitting in Abuja.

Sir, the purported petition written to you by the PDP was no doubt written in bad faith and same was a cheap attempt to mislead your good self and indeed the general public on what actually transpired at the Tribunal and the surrounding circumstances. Furthermore, the petition was calculated to ridicule and paint in bad light, the highly revered institution of the Nigerian Army and the office of the Director General of the Department of State Security.

For the record, it is pertinent to clearly state that what transpired at the Tribunal was that the Honourable Tribunal, at the request of the Petitioners (myself and other petitioners) issued a subpoena directed at the Chief of Army Staff (or any of his designated officers) and the Director-General of the DSS (or any of his designated officers) to appear before the Tribunal and give evidence of what they witnessed during the conduct of the National Assembly election in Rivers State on 28th march, 2015, being some of the security agencies that provided security for the said elections.

A subpoena is an instrument of law with which a court or tribunal compels any person, with useful information or document in respect of a case before it, to appear before the court/tribunal and give such evidence and/or tender relevant documents. It is an order of the court directed at the person named therein, which must be obeyed, lest the person so named in it becomes liable for contempt of court.

It was under these circumstances that the Honourable Tribunal summoned the Chief of Army Staff or his officers and the Director-General of DSS to appear before it and give oral evidence of what they witnessed during the conduct of the elections in question.

It is therefore mischievous and indeed unreasonable for anybody, especially the PDP, Rivers State to cast baseless aspersion on these gallant officers of the Nigerian Army and the DSS. One can only wonder whether it would not have been foolhardy for the Chief of Army Staff and the D. G. of the DSS to refuse to comply with the sacrosanct order of the Tribunal. In fact, such an act would not only have been foolish, same is indeed a crime as refusal to comply with the tenor of a subpoena is out-rightly punishable with a criminal contempt proceeding against the culprit.

Interestingly, the writers of the said petition deliberately refused to disclose to you in their petition that apart from the Chief of Army Staff and D. G of the DSS, the same subpoena was also issued against the INEC Resident Electoral Commissioner for Rivers State, Mrs. Gesila Khan. No doubt, this willful concealment is a manifestation of the unholy alliance existing between the Rivers State PDP and Mrs. Gesila Khan.

It is on record that despite numerous applications and solicitation to the REC for release of electoral materials purportedly used by INEC (led by the REC in Rivers state), she has consistently refused to release the said documents to us, in order to frustrate and jeopardize our chances in the proof of our respective cases before the election Tribunal. This is inspite of the fact that we duly paid for all the assessed fees charged by INEC for the issuance of certified true copies of these electoral materials to us. Sir, in furtherance of her criminal stand to compromise our cases before the Tribunal, the REC, in a never-before-seen manner, instructed INEC’s team of lawyers to apply to set aside the subpoena issued by the Tribunal against her to present the electoral materials before the election tribunal.

One cannot but wonder why a supposedly “neutral” and “unbiased” umpire would be afraid of presenting before the Tribunal, the electoral materials purportedly used for the conduct of the election, which she claimed was peaceful and properly conducted in accordance with the rules and regulations. Her actions so far confirm that she surely has a lot of skeletons in her cupboard, which the subpoena is about to blow open. No wonder, she would do anything to cover her wrongful and illegal communion with the PDP in Rivers State, including attempt at setting aside a lawful order of the Honourable Tribunal.

That members of the Nigerian Army or the DSS gave evidence before the tribunal, on the order of the Honourable Tribunal itself, is not and can never constitute a politicization of the Army or any other security agency in similar situation. A court of law and/or tribunal, in the course of hearing all sides to a case and ultimately doing justice, is empowered to summon and compel relevant persons to give evidence before it. This is exactly what was done in this case. These gallant officers, in upholding their mantra of patriotism and nationalism, swore to say the truth and nothing but the truth before the Tribunal. The most important thing is that they gave evidence of what they witnessed on the Election Day, and nothing more. Only those who are afraid of the truth would prevent eye witnesses from recounting their experiences during the said elections.

The PDP members who wrote this petition are only crying foul when nothing is amiss. The military officers that gave evidence were ordered to do so by the Tribunal and not by APC members, who are the petitioners before the Tribunal. These military officers are not in the group of witnesses whose written depositions were filed by the APC’s lawyers. In fact, they testified before the Honourable Tribunal without any written deposition, unlike what is the case with conventional witnesses called by the petitioners (APC members) at the trial of their petition. What is more, the PDP members, who are Respondents to the petitions before the Tribunal and the writers of this baseless petition, are also at liberty under the law to apply for issuance of the same subpoena by the Honourable Tribunal to order any person/ authority, including the Chief of Army Staff and D-G, DSS, to come and give evidence before the Tribunal.

Application for the issuance of subpoena by the Tribunal is not a prerogative of the APC members in the various election petitions before the Tribunal. This is what is expected of these PDP petition writers, instead of whipping up unnecessary bias against a lawful and binding order of the Honorable Tribunal.

Sir, it is our position that if there is anyone to be called to order on this issue, it is nobody but the INEC Resident Electoral Commissioner for Rivers State, Mrs. Gesila Khan, who may as well go down in history as the only INEC official in our country to have applied for the setting aside of a court subpoena, by filing an application in that regard. I make bold to say that the reputation which Prof. Attahiru Jega built for INEC in the recent past is constantly being eroded by the activities of people like the REC in Rivers State and it is only a matter of time for the institution to be reverted to the pre – Jega era, if the REC is not called to order now.

On the contrary, we are of the firm belief that the Chief of Army Staff, the DG, DSS and their men ought to be tremendously commended for upholding the rule of law and constitutionalism. It is only when institutions of government respect and obey the law, as done by the Nigerian Army and DSS in this case, that the general public too can follow suit. It is high time that we departed from the tradition of institutional impunity and embrace profound respect for the rule of law.

Your Excellency, this petition is just another one in the series of such letters/petitions geared towards whipping up unfavourable sentiment targeted against members of our party. Your administration’s fight against corruption and lawlessness cannot be tarnished by baseless and spurious insinuations of nepotism as depicted by this petition. We fully believe in your capacity to identify mischievous allegations such as this and we humbly urge you to disregard the said petition as same carries no weight. What ought to be done are as highlighted above and we are confident that your Excellency would, once again thread the path of truth and constitutionality on this matter since it is only by so doing that we can together build a Nigeria of our dream. Long live the Federal Republic of Nigeria.

President Buhari, the North and the dangers ahead