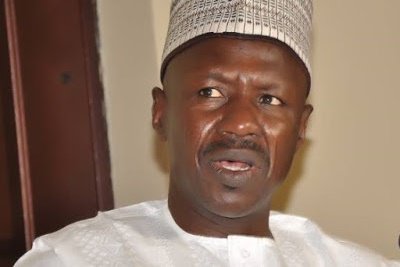 Dismissing as deceptive and illegal the directive by President Muhammadu Buhari to Attorney General of the Federation and Minister of Justice, Alhaji Abubakar Malami, to investigate allegation of fraud made against some key government officials, a call has gone to President Buhari to order their sack and prosecution instead.

A Pro-transparency and Non-Governmental Organization- HUMAN RIGHTS WRITERS ASSOCIATION Of NIGERIA (HURIWA), which made the observations stated that available body of evidence as tendered to the National Assembly are strong enough to constitute the materials needed for the prosecution of the duo of the Acting Chairman of Economic and Financial Crime Commission (EFCC) Alhaji Ibrahim Magu and the Secretary to the Government of the Federation Engineer Babachir Lawal.

“The directive for another probe by the Federal Attorney General and minister of justice who himself has come under intense accusations of fraudulent practices and other illegality such as authorising a misguided secret policing institution to embark on the midnight invasion of private homes of judges cannot now be seen investigating other accused high profile government officials some of whom are his political party partners. This is an attempt at time wasting and is diversionary “.

According to a media statement issued jointly by the National Coordination Comrade Emmanuel Onwubiko and The National Media Affairs Director Miss Zainab Yusuf, HURIWA said there is no provision known to the constitution nor indeed any extant statutes that clothed the office of the Federal Attorney General with the typical police authorities of investigation.

The rights group said the appropriate step that ought to have been adopted by President Buhari was to have directed the Nigeria Police Force to arrest Alhaji Ibrahim Magu and the embattled Secretary to the Government of the Federation Pastor Babachir Lawal and jointly work with the office of Federal Attorney General to commerce immediate prosecution in the competent courts of law under section 6 of the Nigeria constitution.

Citing section 174 (1) (a) (b) and (c) and subsection (2) and (3) of the constitution the Rights group said it would amount political forum shopping for President Muhammadu Buhari to have asked the Justice minister to carry out a routine policing responsibilities.

Igboho not under any immigration-related investigation in Benin…

“The Attorney-General of the Federation shall have power –

(a) To institute and undertake criminal proceedings against any person before any court of law in Nigeria, other than a court-martial, in respect of any offence created by or under any Act of the National Assembly;

(b) To take over and continue any such criminal proceedings that may have been instituted by any other authority or person; and,

(c) To discontinue at any stage before judgment is delivered any such criminal proceedings instituted or undertaken by him or any other authority or person.

Besides, the group said that subsection (2) of the aforementioned section states that:

“The powers conferred upon the Attorney-General of the Federation under subsection (1) of this section may be exercised by him in person or through officers of his department” even as subsection (3)  affirmed thus:

“In exercising his powers under this section, the Attorney-General of the Federation shall have regard to the public interest, the interest of justice and the need to prevent abuse of legal process”.

The Rights group said the federal attorney general only has prosecutorial powers just as it has cautioned against the ongoing plots to use the office of the Federal Attorney General as a smokescreen to weave the wool of mass confusion on the watching public with the underlying objective of providing soft landing to the top government officials who have breached the Federal Government’s anti-corruption standpoint for their own personal aggrandisement.  The group said President Buhari must be reminded that no Nigerian is indispensable.

See photos of James Ibori after his release from UK prison