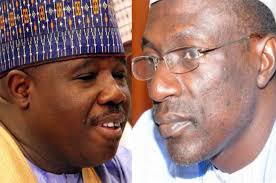 The crisis in the Peoples Democratic Party, PDP, was at the point of crossing party lines, yesterday, after the Senator Ahmed Makarfi faction presented what it claimed to be damning evidence of the deep involvement of All Progressives Congress, APC, in the affair.

The Makarfi’s faction, at a world press conference, named Governor Rochas Okorocha and the Minister of Transportation, Mr Rotimi Amaechi, of stirring the crisis by propping the Senator Ali Modu Sheriff faction through covert means. However, Deputy National Chairman of the party, Dr. Cairo Ojougboh, in an entreaty to the Makarfi faction, warned, yesterday, that the party stood the risk of losing the 2019 elections if the factions did not reconcile.

The offer nonetheless, supporters of the Makarfi faction, yesterday, staged a demonstration in front of the national secretariat of the party that was taken over by Sheriff last Thursday, chanting that Sheriff should wait for the Supreme Court decision on the crisis.

Against the background of the takeover of the national secretariat of the party by Sheriff last Thursday, spokesman of the Makarfi mainstream, Prince Dayo Adeyeye, who addressed the press conference, said Senator Sheriff should wait for the conclusion of litigation on the leadership crisis in the party at the Supreme Court rather than take law into his hands by forcibly taking over the party headquarters.

Makarfi accuses Okorocha,  Amaech Adeyeye, who accused the police and APC of working in tandem with Senator Sheriff to stifle the opposition, also named those he claimed to be facilitating the crisis. “We have stated several times that the APC has its hand deep in the PDP crisis. There is no doubt that Sheriff’s activities against the PDP are being aided and abetted by the APC.

“For the record, just last week, the Governor of Imo State, Rochas Okorocha, gave unsolicited advice that we should support Senator Sheriff. “That is one instance of their meddlesomeness in the PDP affairs. There is no doubt that Okorocha and Co. are happy that their man won at the Appeal Court but very much afraid that he could lose at the Supreme Court. “Also, we have it on good authority that the Minister of Transport, Rotimi Amaechi, has deployed his former Abuja Liaison Officer who is a former Intermediate Officer of the party, Mr. John Enebeli, among others, to lure some members of staff in support of Senator Sheriff by promising them huge sums of money to offset their outstanding allowances.

“Senator Sheriff is equally luring some employees on the same jumbo promise. Let him recall that he made the same promise when he first assumed office only to dash the hope of the hapless employees. Okorocha, Amaechi, Enebeli react Governor Okorocha’s spokesman, Mr. Sam Onwuemeodo, however, expressed his ignorance of the statement attributed to his principal, saying the PDP was in a meltdown and its officials had become so desperate and would hang on to anything for survival. Mr. Amaechi’s spokesman, Dave Iyofor, also rebuffed the claims of the PDP faction, yesterday, saying: “Rotimi Amaechi is in APC, he does not know what is happening in PDP.

They should sort out whatever is there among themselves, and should leave him out of it, it doesn’t concern him.” Contacted on his alleged involvement, Mr. Enebeli, also  said: “That is laughable, how can I do that? I am a full member of APC. So, how can I be wooing people to join another party, a party that is having their internal problems?”  PDP stands risk of losing in 2019—Ojougboh Meanwhile, Dr. Ojougboh, the deputy national chairman of the party has cautioned that the party stood the risk of losing the 2019 elections unless the two factions rallied towards one another.

Speaking to Vanguard in a telephone interview, he said: “Again, I will also like to say that in matters of this nature, if the PDP does not reconcile itself it should forget 2019. “If they say that they are going to the mega party, we wish them luck, but we are remaining in PDP, and the PDP will be fragmented, and APC will have a field day. Because of their insistence and the way that they are behaving, they are the ones working for the opposition to divide the party.”

Sacked Sen. Akpan to refund all monies collected while in office