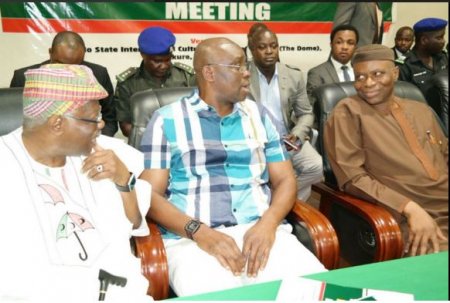 B. The Federal High Court in Port Harcourt in FHC/PH/CS/524/2016 PDP & ORS. Vs. SHERRIF & ORS in its judgment endorsed the decisions of the 21st May 2016 National Convention, holding that the Convention did not violate any extant Order of the Courts or any provisions of the Party’s or Country’s Constitution.

C. On the 17th February 2017, the Court of Appeal sitting in Port Harcourt in a split decision in CA/PH/349/2016 SHERRIF & ORS. VS. PDP & ORS. nullified the decision of the National Convention of 21st May 2016 and reinstated the Sherrif-led National Working Committee;

D. While the party holds the judiciary in the highest regard, the decision of the aforementioned Court of Appeal was greeted with consternation not only amongst leaders and members of the party in Nigeria but also true lovers of democracy in Nigeria and the world over;

E. Moved by the outpour of anxiety and rage over the decision of the Court of Appeal, stakeholders and leaders of the party ranging from the Board of Trustees, Governor’s forum, National Assembly Members, former PDP Ministers forum, National Vice Chairmen, State Chapters represented by the Conference of State Party Chairmen, Leadership of State Assembly Caucuses and other major stakeholders assembled in Abuja on the 20th day of February 2017 to examine and review the state of the party following the judgment of the Court of Appeal.

NOW THEN, the stakeholders and leaders of the party aforestated firmly and unequivocally resolve as follows:

1. That the Peoples Democratic Party is united, strong, resolute, steadfast and solid under the leadership of the National Caretaker Committee in view of the fact that the Court of Appeal is not the final court on the matter. All members, leaders and organs of the party, including but not limited to the Board of Trustees, the Governor’s forum, the National Assembly Caucus, PDP former Ministers forum, National Vice Chairmen, State Chapters represented by the Conference of State Party Chairmen, Leadership of State Assembly Caucuses and teeming members nationwide, stand resolute that authority to lead the PDP, and indeed any party, solely and exclusively derives from the consent of members at plenary. PDP members freely and clearly expressed themselves on the 21st May 2016 at the Port Harcourt National Convention and we stand by the decision given that the National Convention is the highest decision-making organ of the party.

2. That we fully endorse the prompt and proactive decision of the National Caretaker Committee to lodge an appeal to the Supreme Court of Nigeria against the decision of the Court of Appeal as well as filing an application for INJUCTION PENDING APPEAL all of which was done in the morning of Monday 20th February 2017. Our abiding faith in the capacity of the judiciary to protect Nigeria’s democracy and political aspirations of the Nigerian people, particularly at the level of the Supreme Court, proven repeatedly over time, is aided by the profound, fearless, irrepressible, comprehensive and insightful minority decision of T. N. Orji-Abadua, J. C. A. in CA/PH/349/2016 SHERRIF & ORS. VS. PDP & ORS., whom we salute for doing the judiciary proud in spite of the predatory interferences of anti-democratic forces and State actors.

3. That having duly filed both an appeal to the Supreme Court and an application for Injunction Pending Appeal in the morning of Monday the 20th February 2017, we pass a resounding and unqualified vote of confidence in the leadership of the Sen. Ahmed Mohammed Makarfi-led National Caretaker Committee of the Peoples Democratic Party and pledge our unalloyed support to it as it pilots the affairs of the party in this critical transitional period of the party’s life. To this end, we are not at all deceived by the supposed olive branch being offered by Sen. Ali Modu Sherrif, knowing that the only thing that can come from traitors of his ilk is nothing but a poisoned chalice and a Greek gift.

5. That stakeholders and leaders of the party are enjoined to return to their Geopolitical Zones, States, LGA’s and Wards to convene meetings of the party and disseminate the foregoing to members. True Partymen are urged to remain calm, steadfast, loyal even in the face of wanton provocation of sealing off the venue of a peaceful assembly of stakeholders. We remain committed to the ideals of the party which stands us out as democrats.

6. That in view of the mismanagement of our economy by the APC-led Federal Government, the decline in investor confidence and massive capital flight leading to the Nigerian currency being the worst performing on the African continent; the dehumanization of Nigerians, the abridgement of fundamental human rights, persecution of political opponents, and the return to the dark days of mindless dictatorship and the reign of fear, all leading to a state of helplessness and hopelessness; the PDP reaffirms its commitment to return Nigeria in 2019 to the path of Economic growth and respect for fundamental human rights as guaranteed by our constitution. A PDP-led Federal Government will remove hunger in the land and restore confidence in the Nigerian economy.

7. The meeting agreed to appeal to all Nigerians to fully support the Peoples Democratic Party, a genuinely Democratic Party  that is people oriented and a great defender of equity, justice and fairness to all in its commitment to eradicating poverty, hunger and under-development from our country.

I Stand With James Onanefe Ibori! – By Tony Ademiluyi