A court in the U.K. has dismissed Nigeria’s $1 billion Malabu oil deal suit against oil giants, Royal Dutch Shell and Eni which has been running since 2011.

Journalist and oil campaigner, Barnaby Pace, who monitored the ruling live, broke the news in a series of tweets on his Twitter handle.

According to Pace, the judge, Christopher Butcher, dismissed the case at a virtual hearing on Friday saying it does not have jurisdiction over the case.

He added that Nigeria was also denied permission to appeal against the judgment.

He noted that the request was denied after Eni and Shell contested Nigeria’s arguments to appeal against the ruling.

He, however, noted that Nigeria can still seek further permission to appeal.

Shell and Eni had asked the court to decline jurisdiction as the Italian case against the oil companies is still in progress.

The judgment, he said, does not affect the separate charges against the companies in an Italian court.

See live tweets of the judgement below:

—Today in the English High Court oil giants @Shell and @eni Eni are arguing that a billion dollar lawsuit brought by Nigeria should not go ahead while there is also a claim for damages as part of the ongoing Milan criminal trial. I’ll be tweeting as we go.

—For those wondering I am definitely not at the High Court today, the hearing is taking place over Skype so I’ll be watching from my dining table! Its great these court hearings are being put online making them far more accessible.

—Defendants (Shell, Eni etc) are asking for the court to decline jurisdiction under article 29 of the recast Brussels Regulation, as the Italian case against the companies is ongoing. If the case is dropped against Shell then the rest falls away as Shell is the UK defendant.

—Alternatively the defendants will be asking to have the case stayed until the end of the Italian case under article 30 of the same regulation or alternatively on case management grounds.

—Richard Handyside QC, acting for Eni is outlining the similarities between the Italian criminal case charges and civil claim there based on international bribery charges and the English claim based on allegations of bribery, dishonest assistance and conspiracy.

—Eni’s lawyer says that the companies have made no profit on the deal as “the FRN has declined to grant a mining license” without which no oil can be produced and no profits made.

—Eni says that the FRN has brought two duplicative claims in Italy and England within months of each other and that the FRN acknowledged that they might have to choose between them down the road. They were hoping to have a “one way bet” according to Eni.

—Eni’s lawyer is walking the court through the legal precedents on article 29 including cases determining the same cause of action, identifying the object, identifying the cause and identifying the essential issue between the parties and the end the case aims to achieve.

—Eni is arguing that the FRN is wrong to say the Italian claim is different because the Public Prosecutor of Milan (PPM) is involved. They say the PPM is not involved in civil claim in Italy, the FRN is the sole plaintiff for harms suffered as an injured person.

—The FRN’s point that the Milanese prosecutor could chose to end the case in Italy whenever they want, without the FRN having a say in that scenario, isn’t relevant says Eni.

—Eni says the uncertainty around the outcome of the potentially duplicative claim elsewhere is irrelevant, including when that other claim involves a criminal prosecution. They say anyway there is no suggestion that the Milan prosecutor has any intention of dropping the case.

—We’re back from a lunch break and Eni is now outlining how both the FRN’s Italian claim and the English claim are seeking the same object of the proceeding and talking through the legal sources for their argument. Eni says both claims are against Shell and Eni for money.

—Eni lays out that while the FRN is asking for the court to rule that it is entitled to rescind the 2011 deal for the license. Eni says that this doesn’t work as neither Eni nor Shell parent companies were parties to the 2011 contracts, their subsidiaries were.

—Eni states that FRN has written in correspondence that President Buhari has ruled that no mining license will be issued to the companies while the legal cases are continuing.

—Eni’s barrister says that FRN by bringing these two simultaneous claims in two jurisdictions puts an unreasonable burden on Shell and Eni. Under article 30 the second case (the English case) should be stayed until the final determination of the Italian proceedings.

—Eni says that the fact that two different standards of proof between the cases (criminal and civil) doesn’t matter as two cases could still create contradictory judgements on the facts if nothing else.

—Justice Butcher raises concerns that he couldn’t bind the court to the length of any stay as the parties could apply to start the English case if they wanted, or extend it. Eni says the principle is that no further money should have to spent on an overlapping case.

—Eni is arguing that permission to serve out of jurisdiction should not be allowed as there’s no prospect of FRN winning its claim for an entitlement to rescind the OPL 245 deal. They say the NNPC would have to be joined to the lawsuit as a part to the deal.

—Eni says the rights of NNPC would be affected if the 2011 deal was rescinded and they aren’t a party. FRN responded in the papers that they are merely asking for a declaration that Nigeria is entitled to rescind the deal, Nigeria would then take a separate decision to do it.

—Eni says this doesn’t work as the entitlement would be only valid in that moment. If then later on if and when the FRN chose to rescind the deal then the circumstances might have changed in the meantime making the entitlement no longer valid.

—Eni says that the 2011 deal ended a series of legal cases, rescinding the agreements would create the problem of how to deal with those cases which were ended by the deal. Eni says that would be impossible to resolve.

—Shell’s barrister Lord Goldsmith takes over. He emphasises first that Shell denies any allegation of bribery and that they would fight those allegations if the trial continues.

—His submission is going to focus on “fair presentation” of when the FRN learned about the issues at hand, and that the FRN’s presentation is positively and seriously misleading. That timing is important to avoid the claim being time barred.

—Shell says that the FRN’s lawyers statement that the facts of the case only became apparent with the Italian case was wrong and that they failed to explain what Nigerian law enforcement agents at the EFCC had found.

—Shell says the EFCC had traced the money flows in 2012 and this wasn’t represented.

—The court calls it a day now, the hearing will start again with more from Shell’s side at 10.30 UK time tomorrow. The FRN submissions will likely be in the afternoon. I’ll be back tweeting in the morning.

To provide further context please see below a screenshot of the relevant Articles 29 & 30 of the EU recast Judgments Regulations 2012 which respectively mandates and permits courts of EU Member States to stay proceedings in matters pending in courts of another Member State: 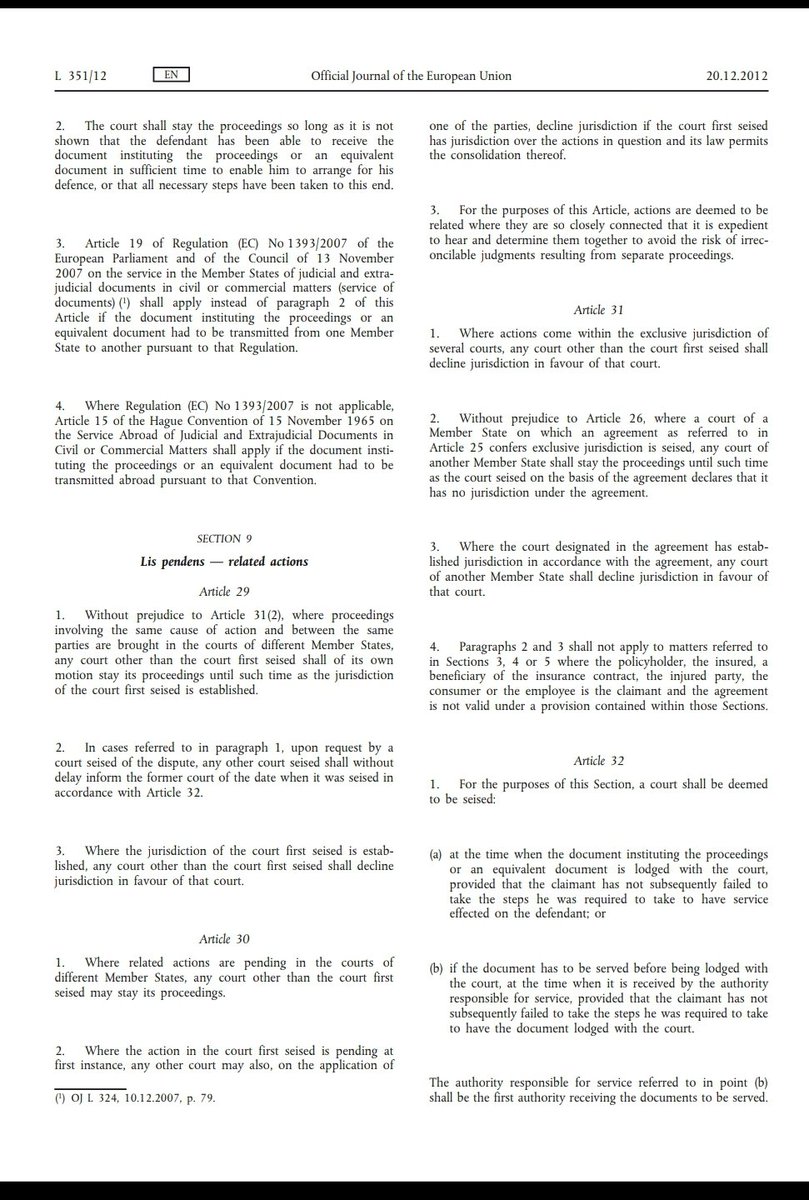 For the background, take a look at the following dossier:

How Dan Etete’s billion-dollar deal ended up in court

An investigation in Nigeria has turned into the country’s biggest corporate bribery case.

Nine executives from Eni and Royal Dutch Shell, and Nigerian officials, face charges in Milan over how they won control of a rich oil block in a saga that goes back two decades.

Shell, Eni and the Nigerian corruption quagmire of OPL 245

In its latest legal moves, the Nigerian government has raised the stakes in the legal battles over the highly prospective OPL 245 oil block. The Africa Report delves into the background of what could be one of the most important corporate fraud cases in Africa’s history.

How three Nigerian heads of state and an oil minister fed the corrupt networks behind the billion-dollar OPL 245 court case.

Who is Fabio de Pasquale, prosecutor in the OPL 245 case?

The OPL 245 case is not the first time that Fabio de Pasquale, the energetic Milan-based prosecutor, is taking on the Italian state-owned oil company Eni and its top officials.

Amaechi Is So Cold About It – By Yinka Odumakin