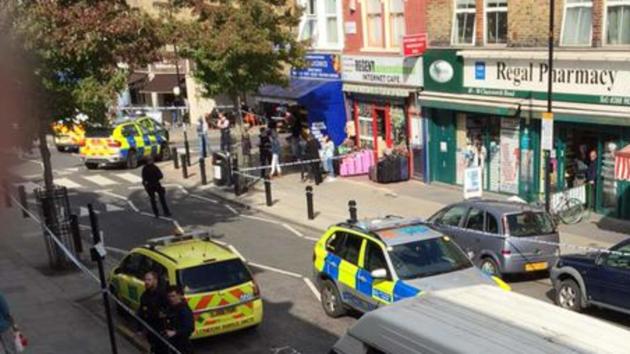 daylight in a busy London street.

The victim, who was found with gunshot wounds next to a butchers in Chatsworth Road, Hackney, shortly after 1pm, was pronounced dead at the scene.

An investigation has been launched by police into the fatal shooting and a post-mortem examination is due to be carried out.

Next of kin have been informed.

Officers arrested a man in his 20s close to the scene on suspicion of murder. He currently remains in custody at an east London police station.

Detectives from the Homicide and Major Crime Command (HMCC) are investigating.

Meanwhile, the gunman is being hunted by police.

A Scotland Yard spokesman said: “Officers, specialist firearms officers and the London Ambulance Service (LAS) attended the scene and found a man with injuries consistent with being shot.

“He was pronounced dead at the scene.”

A spokesman for the ambulance service said: “Sadly, a man reported to be in his 20s was pronounced dead at the scene.”

There has been 175 Teenage Murders (Homicides) in UK since 2005 – before yesterday the most recent fatal homicide was Marcel Addai, aged 17, fatally stabbed on the 4th September 2015.

Over the last 8 years (2005 to 2012) a knife or sharp instrument was the most frequently used weapon in teenage murders (representing 68% of fatalities); there was a Gun (firearm) used in 18% of London Teenage Murders.

Clueless Buhari has no agenda beyond reliving northern domination