“The animals are better. They know how to distinguish male from female. If we approve [of] male on male, female on female, then man is worse than animals.” – Pacquiao

Manny Pacquiao is not backing down from his stance against homosexuality.

Less than a day after the Filipino boxer and politician lost his sponsorship deal with Nike because he compared gay people to animals, Pacquiao took to Instagram early Thursday morning and posted some Bible verses that support his views.

One of them, Leviticus 20:13, states in no uncertain terms that homosexuals should be killed:

“If a man has sexual relations with a man as one does with a woman, both of them have done what is detestable. They are to be put to death; their blood will be on their own heads.”

See the most-read stories in Sports this hour >>

Pacquiao’s post was up for about two hours and got more than 18,000 likes before being deleted. The Filipino news agency ABS-CBN captured a screenshot of the post before it was removed.

Pacquiao, a member of the Philippines’ House of Representatives, included other Bible verses in his post, including Luke 6:22-23, an apparent reference to his current situation:

“Blessed are you when people hate you, when they exclude you and insult you and reject your name as evil, because of the Son of Man. Rejoice in that day and leap for joy, because great is your reward in heaven. For that is how their ancestors treated the prophets.”

Pacquiao was one of several candidates for the Philippine Senate who recently were asked their views on same-sex marriage during a recent interview broadcast by the Filipino television network TV5. 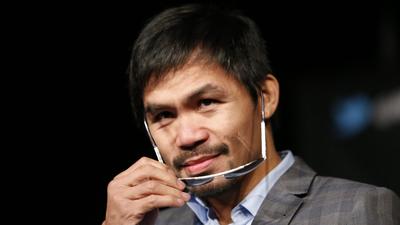 “It’s common sense. Will you see any animals where male is to male and female is to female?” Pacquiao answered.

“The animals are better. They know how to distinguish male from female. If we approve [of] male on male, female on female, then man is worse than animals.”

He apologized for his statement earlier this week but stood by his views.

“I’m sorry for hurting people by comparing homosexuals to animals,” he wrote on Instagram. “Please forgive me for those I’ve hurt. I still stand on my belief that I’m against same sex marriage because of what the Bible says, but I’m not condemning LGBT. I love you all with the love of the Lord. God Bless you all and I’m praying for you.”