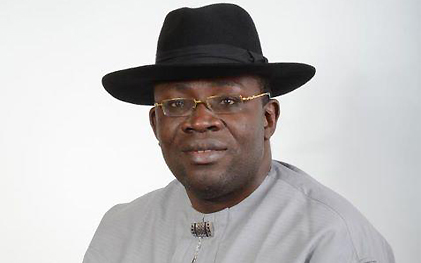 …NDU has potential for self sustainability, says Dickson

Bayelsa State Governor, Hon. Seriake Dickson has pledged the government’s commitment to inject funds for the infrastructural and manpower development of the state-owned Niger Delta University, NDU, to attract reputable lecturers and students to the institution.

Dickson made the pledge during the submission of the interim report on the NDU to him by the Chairman of the Committee, Professor Stephen Odiowei at Government House, Yenagoa.

He noted that, the NDU has the potential for self sustainability, adding that, the challenge for the government is how to raise funds to close the gap on neglect the institution suffered in the past by investing to raise the capacity of the university.

While also pledging to support the committee to ensure that, it formulates a development plan for the Niger Delta University, Governor Dickson promised to study the interim report, with a view to taking the most appropriate decisions that will impact positively on the institution.

Restating the government’s stand on the issue of subvention for the running of tertiary institutions, owned by the state, Hon. Dickson noted that, subvention was a sustainable means to reduce cost of running and encourage infrastructural development.

”Government’s position on the issue of subvention is well known and we will encourage it because it is  sustainable during this period of economic recession, as well as fast tracks infrastructural development

“Government does not consider it sustainable to be paying salaries of lecturers and other staff, as the NDU has potentials for self sustainability, through internally generated revenue to meet their demands”.

Summarizing their findings and observations, Professor Odiowei added that, inadequate funding and power supply, poor service delivery, delay in salary payment, among others, were some of the factors militating against the development of the institution

The committee recommended the provision of 1000kva generating set to serve both the new and old campuses, financial support to the school’s agricultural farm, prompt and regular payment of salaries as well as the engagement professors and senior lecturers as factors that could enhance the smooth running of the university.