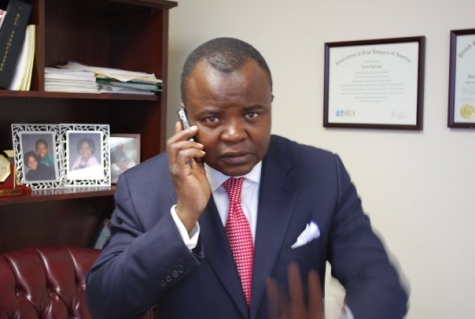 As I promised the world, I would not give up on the Chacha case, even though my involvement in that case has cost me so much and continues to threaten me in all directions.

I will try to make this a brief and easy read:

WHAT I HAVE ENDURED:

Since June 13-14, 2016 when I first got involved in the investigation of Chacha’s disappearance, life has never been the same for me.

And now I am in court facing a defamation lawsuit.

My children, my family, and even my close friends all have suffered just because I chose to demand to know what happened to this woman, called Chacha.

At the beginning, many people, particularly Chacha’s family members that spoke to me warned me that David was dangerous, vindictive, rich and willing to use his power and connection to suppress any opponent.

They warned me that I could be killed by David. That was what stuck to me. This is Nigeria. Human life does not seem to worth anything, unfortunately.

A sitting Attorney General was killed and nothing happened. David posed an absolute danger to me.

When I entered the plane in June to come to Nigeria to continue my investigation into what happened to Chacha, I knew I was taking a risk for my life.

As I sat in the plane flying to Nigeria, I had no idea what awaited me, but I felt I had made a difficult choice.

Many people were then looking up to me to live up to my promise to pursue the Chacha case. I did not want to disappoint them.

David did not fight me directly as I expected. He fought me in a very different method. He used his connections and set in motion processes that led to my arrests and detentions.

He used a private investigative firm to pursue me. He used the media, particularly the online media to pursue me.

He spent millions, which he has in abundance, to place stumbling blocks everywhere along my path.

The message was clear that David was up to something very nasty and the authority seems to have an idea.

In fact, sometimes, I look back at the idea of the police arresting me. I wonder if they had arrested me because they knew that David was planning to do something sinister to me.

On one occasion, the police invited David and me to a meeting at the police headquarters.

The police admonished both of us and the police boss turned to David and told him not to take the law into his hands and to pursue any grievance he has against me through legitimate civil courts.

That message was instructive. Did the police fear that David might make the law into his hands against me? What did that mean?

Also, by urging him to go to civil court, it was clear that the police command was asking him to stop expecting to use them to punish me.

So, David was to make a choice on how to continue his fight against Emeka Ugwuonye.

He did a few obvious things:

(a) He hired social medial groups and bloggers to attack me,

(b) He hired the regular Nigerian media to attack me.

(c ) He hired the infamous Sahara Reporters to attack me.

(d) He filed a bar complaint against me, and,

(e) He now filed defamation lawsuit against me.

(f) He continued to use one private investigative firm known as Chari gold to fight me. I will tell you about Charigold.

SAHARA REPORTERS: On the first round, David paid Sahara Reporters $15,000 to scandalize me and to publish false stories about me.

Sahara Reporters knows that DPA is now investigating a rape case allegedly committed by its owner, Omoyele Sowore, years ago while Omoyele was a student union activist in University of Lagos.

That investigation intends to show the world that the owner of Sahara Reporters is a rapist.

CHARIGOLD: This is a private investigative firm that David Aiyedogbon hired when Chacha’s disappearance became public in May of this year.

One of the top officers of Charigold is Daniel Ayo Obiora Snr. Charigold goes by the name Charigold Investment Ltd.

It is not clear whether David is actually the owner of Charigold or whether he is just using Charigold. Particulars:

But Charigold was hired by David in May.

It is clear from observations that David actually hired Charigold not to find what happened to Chacha, but to track and falsely implicate various boys and men believed to have been Chacha’s boyfriends.

That was how about 6 boys/men were all tracked and detained by the police over Chacha in accordance with the information David provided them – that his wife (Chacha) connived with her boyfriends to fake her disappearance in order to extort money from David.

And Daniel and his Charigold appeared to be doing a good job on that. They rounded up these boys up.

Indeed, Charigold was not investigating Chacha’s disappearance. Rather, it was misdirecting the investigation and covering up for David.

So, right from inception, therefore, Charigold saw my entry into the case as a big threat. Charigold did everything to frustrate me and to stop me.

Indeed, Charigold became the key instrument through which David fought me.

Charigold was responsible for hiring and engaging Sahara Reporters and social medial people to attack me.

Charigold was responsible for faking the existence of Vicky Roberts (the white lady that is attacking me).

Indeed, it was Daniel Ayo Obiora Snr that invented Vicky Roberts and set up the process of using that account to attack me.

And finally, Charigold has been making desperate efforts to penetrate DPA Admin group to discredit me and sow confusion in DPA.

Indeed, Charigold has been talking with two of DPA Admin members with powerful monetary incentives. But I am reacting to this particular threat.

Charigold has created many false Facebook accounts and tried to become DPA members with those accounts.

What is the exact relationship between David and Daniel? This is the big question?

For a while, I did not know that Daniel was not a police officer. He was so close and so present in the police circles and establishment. Why?

Is Daniel just milking David, giving him the impression that he was protecting his interest and would stop me from any investigation that could nail David?

The investigation into what happened to Chacha will continue with or without me.

Nigerians must never accept that Chacha would just disappear into the thin air.

How can an active woman, outspoken, full of life, just disappear like that? This is the puzzle that I have refused to ignore.

Those who lie against me and do everything to put obstacle on my way know exactly what they are doing.

They are trying to cover up what happened to Chacha.

And any of you who believes David’s claims that Chacha is alive, but hiding in night clubs is not being honest to himself.