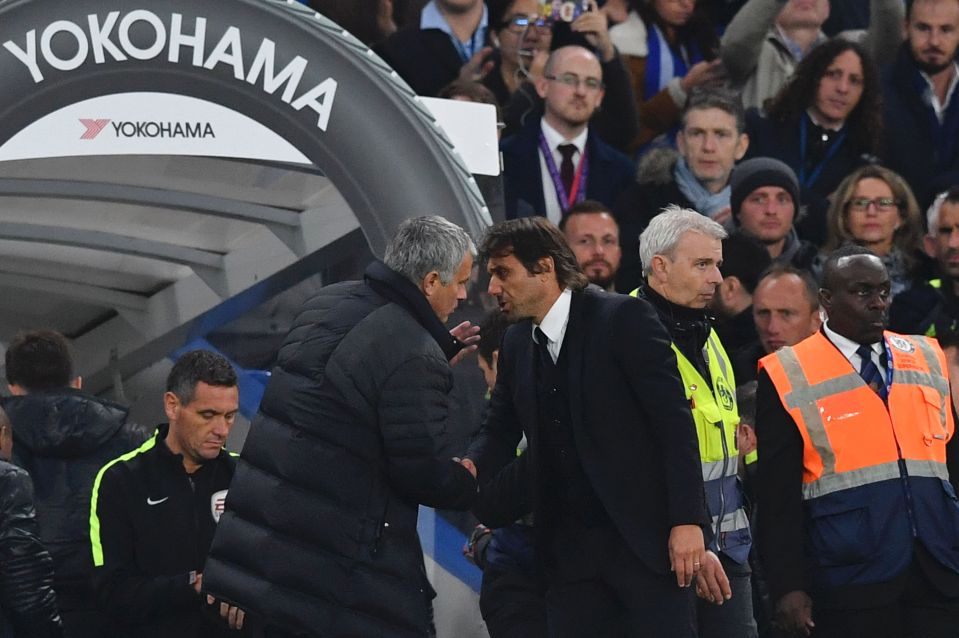 Mourinho reportedly said: “You shouldn’t celebrate like that at 4-0. You can do it at 1-0, otherwise, it’s humiliating for us.”

“There was no incident, it was just a normal thing to do,” he said. “I wasn’t mocking anyone, I wouldn’t do that.

“There were United fans who kept singing, while ours were in silence after a great performance from my team.

“I wanted to call the crowd to applaud the players, which seems normal enough to me.”

Mourinho wouldn’t disclose his comments in a post-match television interview only saying that his words “with Antonio Conte, were for him, not for you.”

Perhaps his words should have been with United’s defense, which had a hand in all four goals.

Pedro beat a hesitant Daley Blind and Chris Smalling to a long ball to score the opener while poor marking contributed to the goals from Cahill and Hazard.

Kante then waltzed through a host of United players to deliver the final blow.

Mourinho rued the miscues but insisted his team didn’t play that badly.

“If you can delete the defensive mistakes from the game I would say it was a good performance,” he said.

“But we cannot delete the mistakes from the game and the first mistake happened after 30 seconds.

“Everything went wrong from minute one. After that, everything was against us in the game.”

Conte was obviously pleased as his team moved up to fourth with a third straight win.

“It’s important this type of game against a team that’s very strong like Manchester United as it increases our confidence,” he said.

Mourinho, meanwhile, could only apologize.

“To the millions of fans we have around the world they have a bad feeling and I am so sorry for that,” he said.

“I have to apologize as the leader of the dressing room and the only thing I can say is I’m 100 per cent Man United, not 99 per cent for Man United and 1 per cent for Chelsea.

“I feel deeply the situation but there is only one answer, training tomorrow and keep fighting.”

Chelsea dominated from the get-go with Pedro scoring after just 30 seconds.

Goals from Gary Cahill, Eden Hazard and N’Golo Kante followed as Mourinho’s first game against his former club since being fired last season turned into a disaster and left his side seventh in the table.

Mourinho spent most of the day with a sour look on his face while Chelsea boss Antonio Conte clearly enjoyed what he was seeing.

The Italian even urged the home crowd after Kante’s goal, something Mourinho reportedly took exception to.