Mugabe’s Address To The Zimbabweans 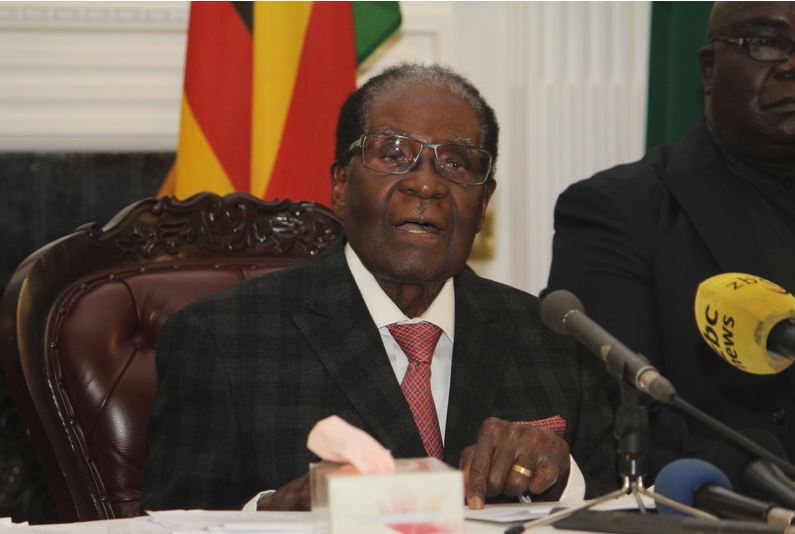 … As He Refuses To Step Down

The embattled Zimbawean Leader, Robert Mugabe shocked the whole world at a nationwide broadcast on Sunday night amid reports that he had agreed to step down after leading the country for 37 years.

In a dramatic turn of event, Sunday night, the nonagenarian failedto step down after the country’s military, a few days ago, announced his ouster from power.

Below is his speech:

“Fellow Zimbabweans, I address you tonight on the back of a meeting I held today with the nation’s security forces command element.

This meeting which was facilitated by a mediating team… followed an operation mounted by the Zimbabwean Defence Forces in the week that has gone by, and which was triggered by concerns from their reading of the state of affairs in our country and in the ruling Zanu-PF party.

Whatever the pros and cons of the way they went about registering those concerns, I as the President of Zimbabwe and as their Commander in Chief do acknowledge the issues they have drawn my attention to, and do believe these were raised in the spirit of honesty and out of deep and patriotic concern for the stability of our nation and for the welfare of our people.

As I address you I am also aware of a whole range of concerns which have come from you all as citizens of our great country and which deserve our untrammelled attention.

Today’s meeting with the command element has underscored the need for us to collectively start processes that return our nation to normalcy so that all our people can go about their business unhindered in an environment of perfect peace and security assured that the law and order prevail as before and endure well into the future.

If there is any one observation we have made and drawn from events of the last week it is the unshakable pedestal upon which rests our state of peace and law and order, amply indicating that as Zimbabweans we are generally a peaceably disposed people and with a given-ness to express our grievances and to resolve our differences ourselves and with a level of dignity and restraint so rare to many other nations. This is to be admired. Indeed such traits must form the path of our national character and personality. Yes, a veritable resource we summon and draw upon in times of vicissitudes.

The operation I have alluded to did not amount to a threat to our well-cherished constitutional order, nor was it a challenge to my authority as head of state and government, not even as commander in chief of the Zimbabwean Defence Forces. To the man, the commend element remained respectful and comported themselves with diktats and mores of constitutionalism.

True, a few incidents may have occurred here and there but they are being corrected. I am happy that throughout the short period the pillars of state remained functional. Even happier for me and arising from today’s meeting is a strong sense of collegiality and comradeship now binding the various arms of our security establishment. This should redound to greater peace and offer an abiding sense of security in communities and in our entire nation.

Among the issues discussed is that relating to our economy, which as we all know is going through a difficult patch. Of greater concern to our commanders are the well-founded fears that the lack of unity and commonness of purpose in both party and government was translating into perceptions of inattentiveness to the economy. Open public spats between officials in the party and government exacerbated by multiple conflicting messages from both the party and government made the criticisms levelled at us inescapable.

Amidst all this, flagship projects already adopted by government stood stalled or mired in needless controversies. All this needs to stop as we inaugurate a new work culture and pace which will show a strong sense of purpose and commitment to turning around our economy in terms of our policies. The government remains committed to improving the social and material conditions of the people. Government will soon unveil an entrepreneurial skills and business development program which will empower and unleash gainful projects at our growth points and in rural areas.”

Ekwueme Was The Stabilizing Factor In Nigeria’s Politics –Ibori

Victor Umeh Defeats Peter Obi At The Court Of Appeal