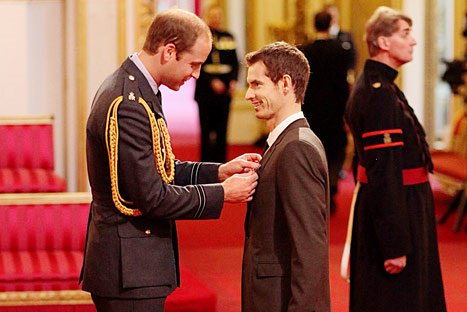 A monumental year for Andy Murray just got even bigger and better as the tennis world No.1 has been knighted in Britain’s 2017 New Year’s Honors List.

The traditional list overseen by the UK government recognizes the achievements and service of “extraordinary” people and 2016 certainly has been an extraordinary year for Murray.

The 29-year-old ended the season as world No.1 for the first time, toppling Novak Djokovic, who had held the top spot since July 2014.

Murray had a golden summer, winning his second Wimbledon title in July and then claiming his second Olympic gold at the Rio Games in August.

Last, but not least, Murray and his wife Kim also became parents with the birth of daughter Sophia in February, just days after he played in the Australian Open final.

It was not quite the start to 2017 that Murray wanted when he lost his first match 7-6(4) 6-4 to Belgian David Goffin at an exhibition tournament in Abu Dhabi, Friday.

The distance runner, who came to the UK from Somalia at the age of eight, was forced to deny doping allegations in 2015 after it emerged he missed two drugs tests in the buildup to London 2012.

Jessica Ennis, who added heptathlon silver to London gold in Rio before retiring, was made a dame (the highest accolade for women) along with Olympic rowing gold medalist Helen Grainger.

Before Donald Trump messes up the Middle East peace process

2017: Another year to prove pessimists wrong – by Charles Dickson