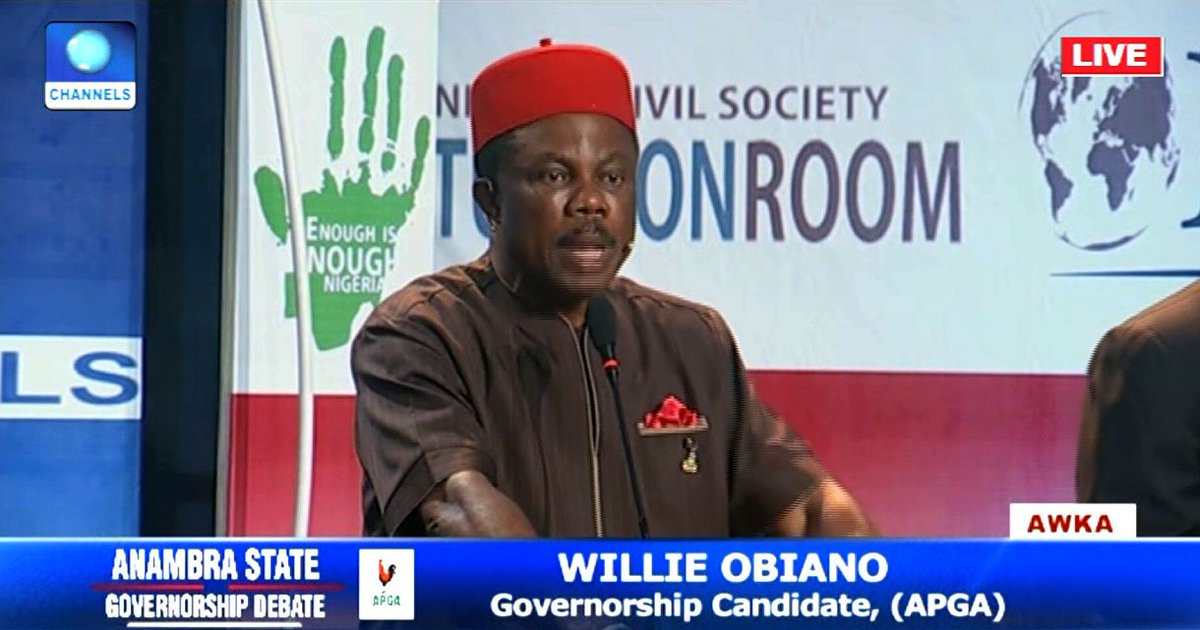 The outgoing governor of Anambra State, Mr Willie Obiano has again been found lieing during the governorship debate organised by Channels TV.

Governor Obiano, with a bold face, told viewers that the Internally Generated Revenue [IGR] for the three years of his administration is 500 billion Naira!

Statistics, however has proven otherwise as the Obiano’s administration generated less than 50 billion Naira within the given period.

That is less than ten percent of what he claimed to have generated!

A commentator on Channels TV right after the debate wondered how a government an be subsisting on lies for over three years.

He also wondered what lethargy of lies Obiano will unleash on Anambra people if he is mistakenly unleashed on the state for the next four years.

“This is a government that is visionless,” he said.

“We need infrastructure that works. We don’t need this type of government in the next four years. I submit myself to serve.’’

Oseloka, who was a former Secretary to the State Government (SSG) to Obiano’s government said that the current Anambra State government has grounded the state to a position where it needs to be fixed.

“This government has spent almost N600 billion in the last four years; there is nothing commensurate to show.

“Where are the roads he constructed? This state is broken, we need to fix it.’’

Speaking on the proscription of the Indigenous People of Biafra [IPOB], Obaze also blamed the Obiano-led administration for sitting and watching while IPOB was proscribed by the federal Government.

“What happened is most regrettable,” he stated. “Before IPOB, we’ve had militancy in the Niger Delta, they were never declared terrorists.

“We had the Fulani herdsmen, they were never declared terrorists and none of them were proscribed.

“I don’t understand how this governor can sit here and young Igbo men who are unemployed and looking for a source of livelihood were branded terrorists and proscribed.

On Umahi’s support for Buhari’s reelection in 2019