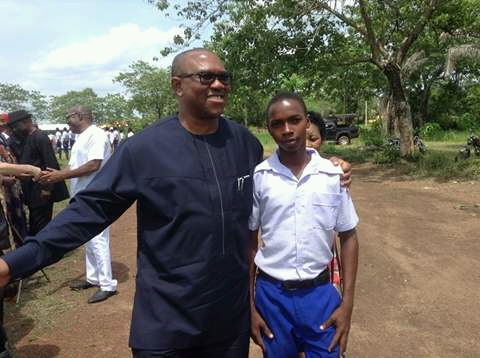 In the picture, Ex-Gov Peter Obi poses with a student of a school he donated 20 million Naira to

The former Governor of Anambra State, Mr. Peter Obi, has finally broken his silence on the controversy raging over the actual amount he left in the coffers of the state when he left office.

His response came via a text message we sent after several unanswered calls.

His reply: “My brother, thanks for your efforts to hear from me in order to put the records straight concerning the unnecessary controversy over Debt and the 75 Billion Naira in investment & cash my Government left.

“I left office almost two years (over 600 days) ago and I will not comment on the statements of my successor, or his proxies.

“All I can confirm is that we never borrowed from any bank in Nigeria, issued any bonds or owed on any certificate for jobs executed when we left office.

“We handed certified accounts statements. Whatever we said we left is properly documented.

“Copies of same were made public at an event in Women Development Centre, Awka.

“The Managing Directors of the three banks in which the respective sums were domiciled, and the incumbent governor, were in attendance.

“Should it be that the government has lost or misplaced its own documents? It can approach the banks.

“I will also make myself available within 48hrs, complete with my own copies of the documents; as I still have them.

“I will not be seen as working against the progress of Anambra State, a State I did everything possible to put on the right track.

“All I can tell you is that I will earnestly continue praying for my successor to build a better Anambra State for our children.

“My heart bleeds whenever Anambra is on the news for the wrong reasons.

“I am also earnestly praying for the President of Nigeria to build a better Nigeria.

“I am presenting Nigeria as most attractive investment destination in Africa to my class at Cambridge University at 2pm today (yesterday).

“Kindly pass this message to your colleagues, because I have been receiving countless texts from them.

“Inform them that I am engrossed with my programme at Cambridge University to answer them individually.

“My brother, bye and May God continue to bless you and your family. “

It would be recalled that Anambra State Government had called a press conference on Saturday and alleged that Obi left a debt of over 100 Billion for his predecessor.

His Media aide, Mr. Valentine Obienyem described the claim as untrue, challenging Anambra State Government to publish the contracts and the names of those being owed.

He further called on Association of Anambra  Accountants to set up an independent Committee to look into Anambra finances as at March 17th, 2017 to ascertain the actual amount Obi left in the treasury.

He insisted that Anambra State is looking for justification for the massive loans they had concluded to take from financial institutions.