Naira drops to N314 to dollar as Sanusi Warns Buhari

The naira dropped further to 313.5 against the United States dollar at the parallel market on Tuesday as shortage of foreign exchange, especially the greenback, persists in the forex markets, two days after former head of Nigeria’s Central Bank Lamido Sanusi said the government should end its policy of trying to maintain the value of the currency, the naira.

The local currency had traded for 310 to a dollar on Monday.

On Tuesday, the naira closed at 199.40 to the dollar on the interbank market, according to Reuters, around the peg rate of 197 to the dollar.

This came just as the interbank lending rate rose to two per cent from one per cent on Monday, after the Central Bank of Nigeria had directed commercial banks to fund their naira accounts ahead of its intervention in the forex market on Thursday.

The overnight lending rates jumped by 100 basis points as the movement of naira cash for forex purchases drained liquidity in the financial market.

The CBN intervenes once a week at the interbank forex market to provide dollar liquidity for some eligible importers.

The naira had plummeted against the dollar last month after the CBN banned dollar sales to Bureau De Change outlets and later stopped daily sales to the interbank market.

The measures were aimed at conserving the nation’s external reserves, which have hit an 11-year low at $28bn.

“The overnight rate went up today to three per cent in the early trade but declined to two per cent after some banks funded their forex accounts,” one dealer said.

The interbank rate mirrors the level of naira liquidity in the banking system.

Traders said commercial lenders’ credit balance with the central bank opened at N978bn ($4.94bn) on Tuesday before the bank called for the funding for forex purchases.

The central bank requires banks to fund their forex account 48 hours in advance of its intervention.

President Muhammadu Buhari told the BBC last week that he was not convinced of the need to “murder” the naira.

The falling oil price has put pressure on his currency policy.

The authorities are keeping the official naira rate at around 200 to the US dollar, but the black market rate is closer to 300.

The government relies on oil exports for vital foreign exchange and the declining price means there are fewer dollars in the country. 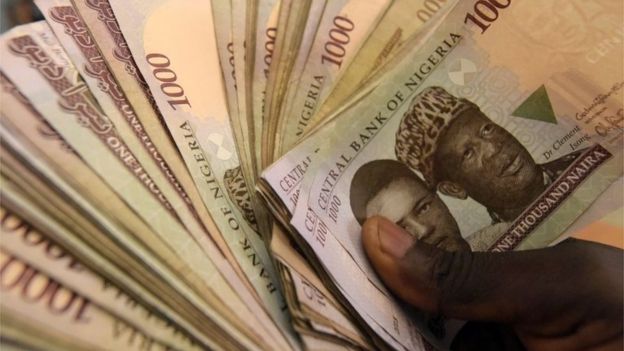 “The government does not have the reserves to keep the exchange rate at its official level in the market,” Mr Sanusi told the Financial Times.

The policy has “never worked” wherever it has been tried, he added.

But Mr Buhari told the BBC that he is yet to be convinced that he should allow the currency to be devalued.

In an effort to sustain the policy, the government has imposed currency restrictions, and halted the importation of certain goods in order to stop dollars leaving the country.

Mr Sanusi was the central bank governor from 2009 to 2014, when he was suspended by then-President Goodluck Jonathan following a row over corruption in the oil sector.

He is now the emir of Kano, an influential religious post among Muslims in Nigeria.

EFCC in court for contempt over Metuh’s press release