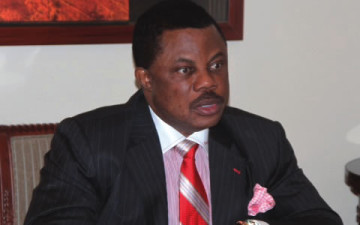 The independent broadcast by Governor Willie Obiano [above] of Anambra State came with what he described in his words ‘as giving hope to the hopeless’.

Consequently, Gov. Obiano announced the release of 25 serving prisoners, whose names were not mentioned and consequently announced that N25 million, of tax payers and extortion payers money in Anambra State should go to 25 persons who have not been named or seen by anyone except the Gov Obiano and his close aides.

We do not object to the exercise of prerogative of mercy in a rationale and moderate way consistent with the state of the economy and security of Anambra State.

Rather, we are worried about the knee-jerk award of cash to ex-convicts without evidence of rehabilitation, vocation and new light of discipline, and even more worried, about the possibility of the existence of ghost prisoners.

We also fear a return to the dark days of spreading cash, rather like manure to purchase private favour, as was prevalent in the tenure of Obiano’s immediate predecessor.

We therefore challenge Gov Obiano to  release a list of all the so-called prisoners  which release he announced and supply their particulars, offences committed, sentence served and  trades learnt  and indicate what plan the relevant government ministry has  worked out before committing to release hard-earned money, paid in taxes by long-suffering innocent Ndi Anambra.

We also request the government to outline the plan it has made for the victims of the crime committed by the 25 to gain some restitution in this process, so that his jumbo largesse will not become an incentive to crime in the state.

We are firmly committed to a rationale exercise of prerogative of mercy, but would like to insist that the cloak of prisoners release should not provide an avenue to siphon Anambra State funds to inexplicable ends.

For: ALL PPROGRESSIVES CONGRESS (APC)