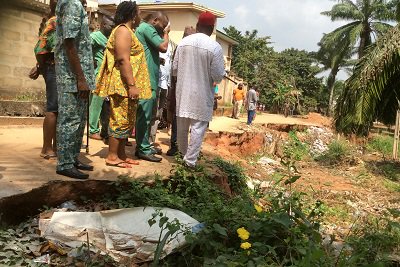 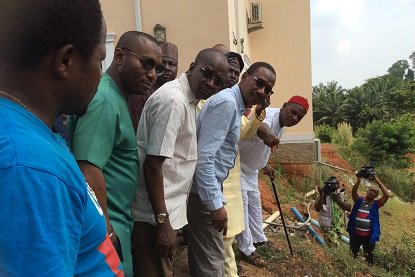 The National Assembly has expressed dismay that Anambra state is lagging far behind in the erosion control works of the Ecological Funds office of the Federal Government, when compared with the number of life-threatening erosion sites in the state.

This observation was made by the House of Representatives Committee on Erosion and Habitat at the palace of Igwe Ralph Ekpe of Enugwu Ukwu, Njikoka council of Anambra state at the weekend during their visit to Enuagu village, Enugwu Ukwu, erosion sites.

The Chairman of the committee, Obinna Chidoka acknowledged the tour enabled him see the worst kinds of erosion sites in the state at Oko, Orumba North council of Anambra state where the former Vice President, Dr Alex Ekwueme personally took them round.

He said the committee was left dazzled and speechless when Dr Ekwueme led the committee to the seemingly endless canyon created by erosion in his backyard and across the road in front of his country home at Oko.

The Anambra visit was sequel to a motion raised on the floor of the House by Hon Dozie Nwankwo, member representing Anaocha/Njikoka/Dunukofia Federal Constituency.

So the Speaker, Hon Yakubu Dogara detailed the committee to visit for on the spot assessment that would enable them to make fare reaching recommendations to the House for onward transmission to the Federal Government.

In his reaction to the visit, Nwankwo whose country home is hanging on the edge of one of the widest site in Enugwu-Ukwu said the efforts was not just about him, but the entire village, constituency and state, having done so much to contain the menace before now, to no avail.

Earlier when the team was received by the state governor, Dr Willie Obiano, he called on the Federal Government to profile the State as an erosion disaster area and to declare a state of emergency on the menace in the state.

Speaking shortly after a meeting with the committee, Gov Obiano revealed that their discussion centered on the numerous erosion challenges facing state.

He pointed out that if nothing was done soon and fast too, the State would lose half of its size to the environmental problem.

He observed that Anambra, which until now was the second smallest in landmass in the country behind Lagos State, is now the smallest because according to him, while Lagos is expanding into the ocean, Anambra has been shrinking further due to ravages of erosion.

He emphasized that the state alone cannot handle the erosion problems.

He, further, noted that he has met with President Muhammadu Buhari severally on the matter and expressed hope that the visit would give impetus to his administration’s requests for immediate intervention on the erosion challenges of the state.

Chidoka acknowledged that the state was very adversely affected by the environmental hazards, causing the people to live in constant fear of imminent dislocation and massive disenfranchisement due to almost daily land losses.

He assured that the Committee at the end of the tour, would make far-reaching recommendations that would see the Federal Government act as a matter of urgency to handle the issues of gully erosion ravaging the state.

After the meeting, the delegation accompanied by the State Commissioner for Environment, Dr Ejikeme toured some of the erosion sites in the state.