The senate has, on Wednesday, indicted Secretary to the Government of the Federation [SGF], David Babachir Lawal over “Mounting Humanitarian Crisis in the North East”.

The Senate also called for the immediate resignation and prosecution of SGF Lawal, ‎accusing him of awarded N200 million contract to his personal company.

The Senate passed resolution for the removal of SGF after the consideration of Interim Report of Senate Adhoc Committee‎ on Humanitarian Crisses in the North East.

Senate President put it to Vote and the Ayes have it that SGF Babachir Lawal resign.

The Senate said that humanitarian funds, as much as $417 million, has been sent to the North East yet no sign of such funds.

The call was made by Senator Dino Melaye in plenary during considering of report of the Ad Hoc Committee on Humanitarian Crisis in the North East laid by Senator Shehu Sani.

Senator Sani, who moved for the consideration of the report, spoke on the pitiable plight of a projected 5.1 million IDPs in the North East.

Sani said that NGOs are doing most of the humanitarian work as well as UNICEF, Doctors Without Borders and the Dangote Group.

He noted that while the Federal Ministry of Health was nowhere to be found, the Nigerian Air Force, NEMA and Borno SEMA were visible.

He also pointed out that the PINE took an undue advantage of the emergency situation to overinflate contracts.

He noted also that the new Initiative on the North East should coordinate all the efforts to support the IDPs.

Senator Sani concludes that the Federal Ministry of Health should immediately move its personnel to the IDP Camps in N/East Nigeria.

Senator Dino Melaye then comments on the report of the Ad Hoc Committee on the mounting humanitarian crisis in the North East.

He referred to Global Vision Ltd, saying: “The company is owned by SGF Babachir Lawal to which he resigned as a director in Sept. 2016 but still a signatory to the company’s account”.

The report revealed that ‎Global Vision Ltd is owned by Babachir and was indicted in the interim report for allegedly benefiting from inflated and phantom contracts – or ones not executed at all – awarded by the PINE.

According to the report, Mr. Lawal’s directorship of the Global Vision while being a public official – Secretary General of the Federation – contravened Nigeria’s code of conduct for public officials as enshrined in the 1999 Constitution.‎

Senator Dino Melaye says the action of SGF Babachir Lawal is an embarrassment to the All progressives Congress [APC] and totally an Anti-Buhari tendency.

Senator Dino Melaye says the Secretary to the Govt. of the Federation, David Babachir Lawal should immediately resign and be prosecuted.

Senator Yayi Adeola says “the actions of the Federal Government in recent times is nothing to write home about”, adding that Engr David Babachir Lawal should immediately resign his appointment as SGF and be prosecuted accordingly.

Senate then approved that contracts for the IDPs must pass through the Bureau for Public Enterprises [BPE] for proper valuation.

Senate also approved the recommendation that the new Presidential Committee on North-east Interventions (PCNI) coordinate relief activities for the IDPs in the North East.

It also approves the recommendation that personnels of the Federal Ministry of housing [FMOH] Nigeria move to the IDP Camps in the North East.

Senate thereafter recommended that any Government Official found culpable of sharp practices be suspended and prosecuted.

Speaking, Senate Leader Ali Ndume pointed out that humanitarian funds, as much as $417 million, has been sent to the North East yet no sign of such funds.

He pointed out that the need for medical personnel from FMOH will be followed up as well as the need for food items.

Saraki said that the Ad Hoc Committee has only but reported some infractions while noting that Nigeria cannot continue with business as usual.

See the full report below: 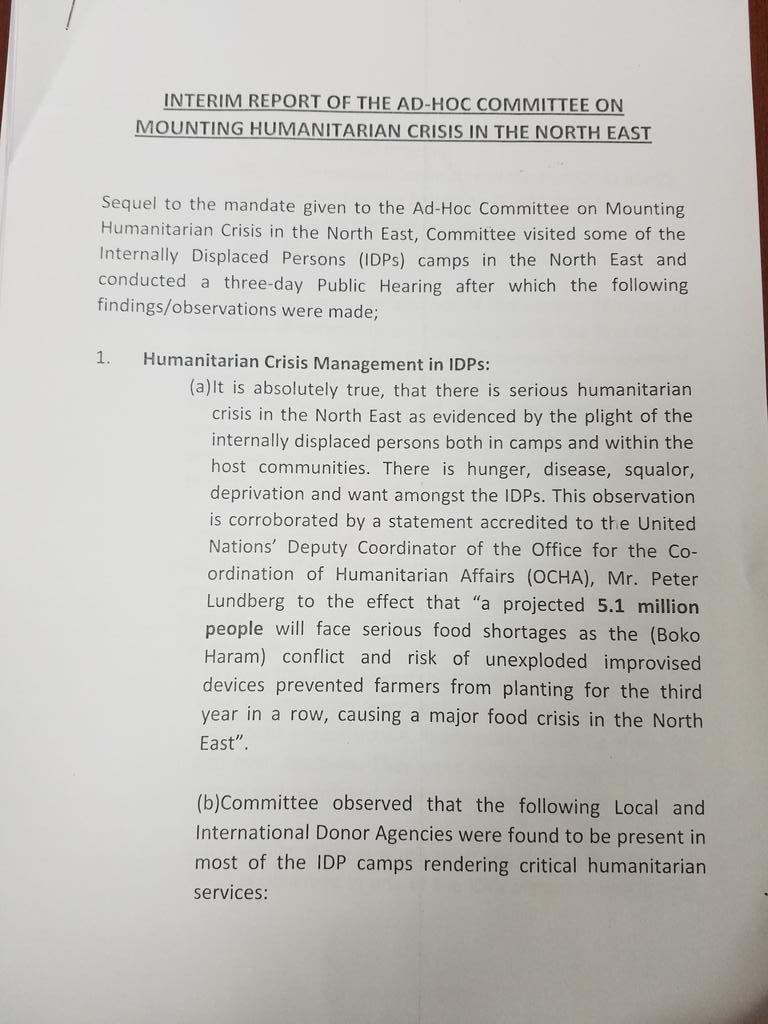 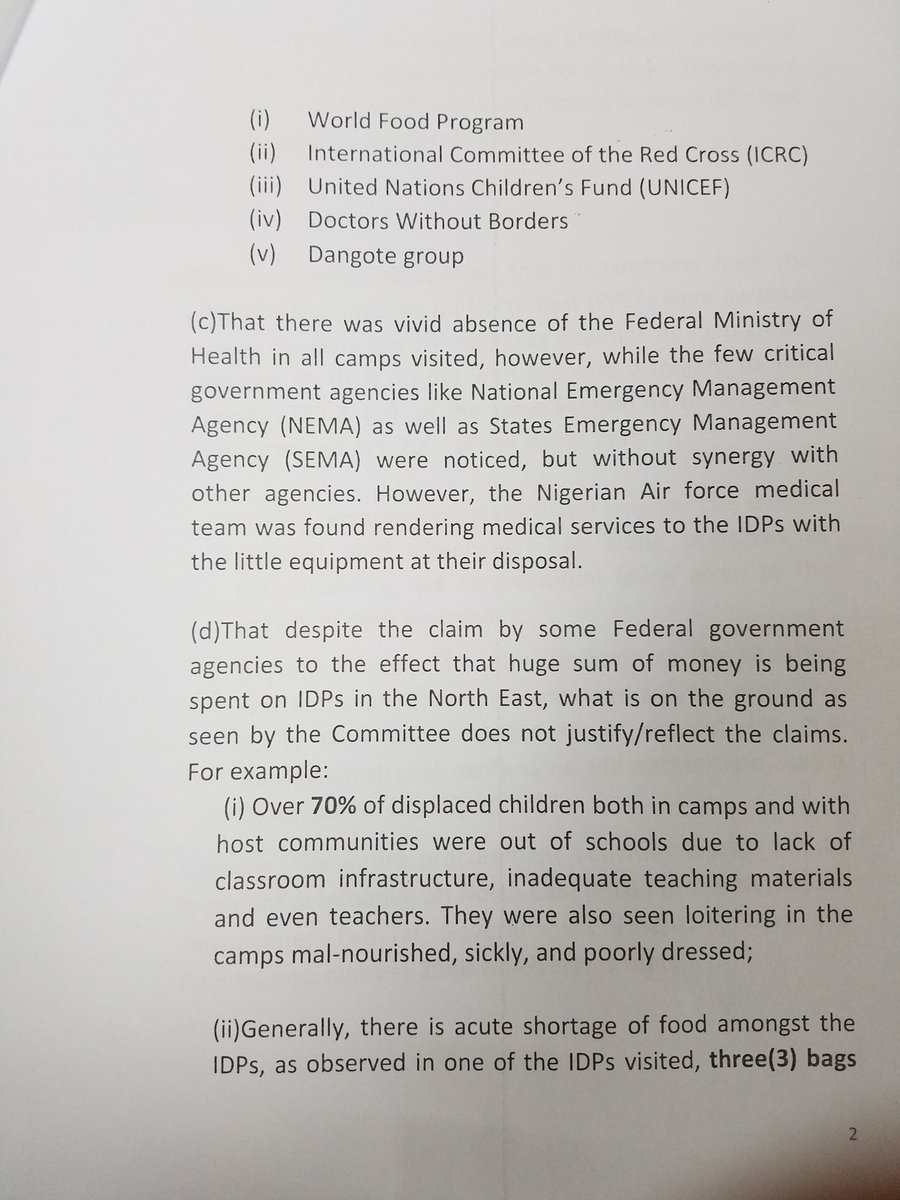 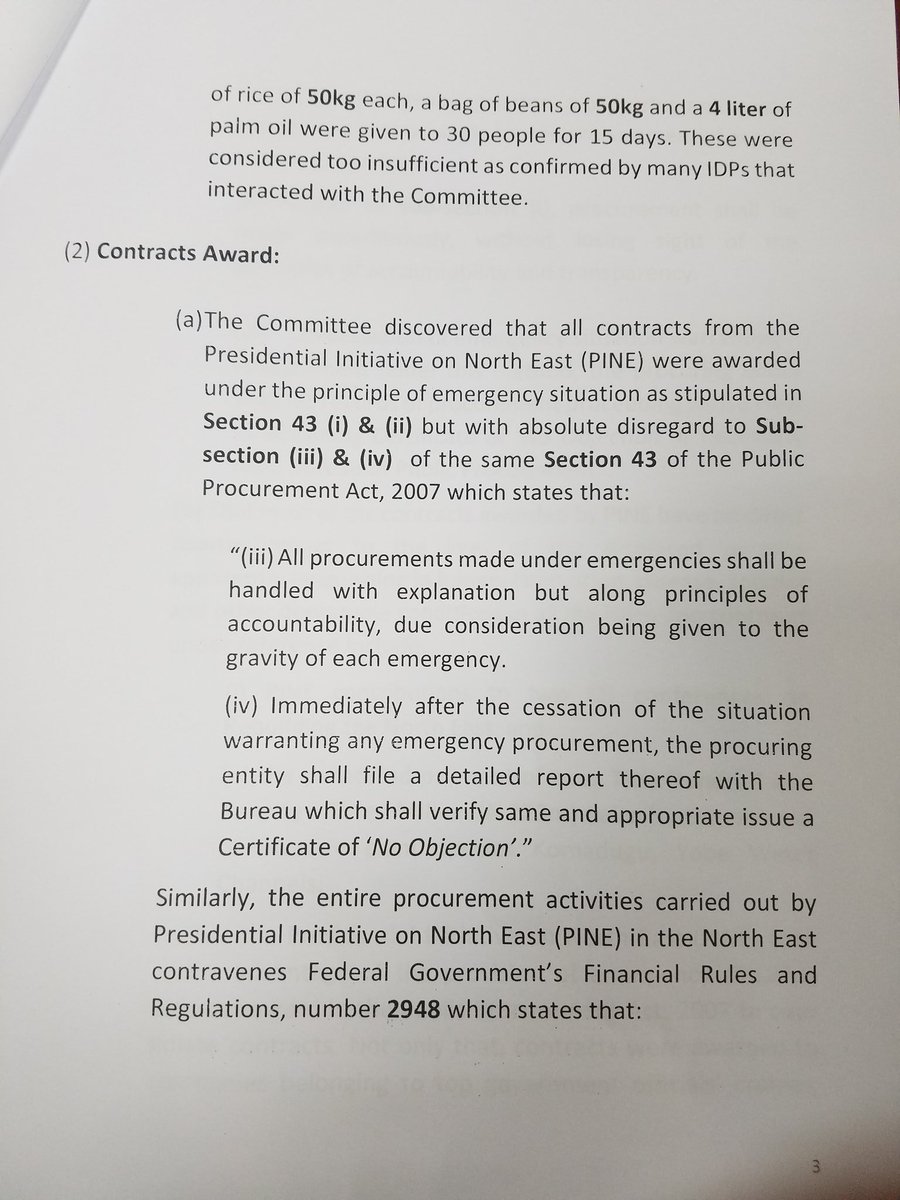 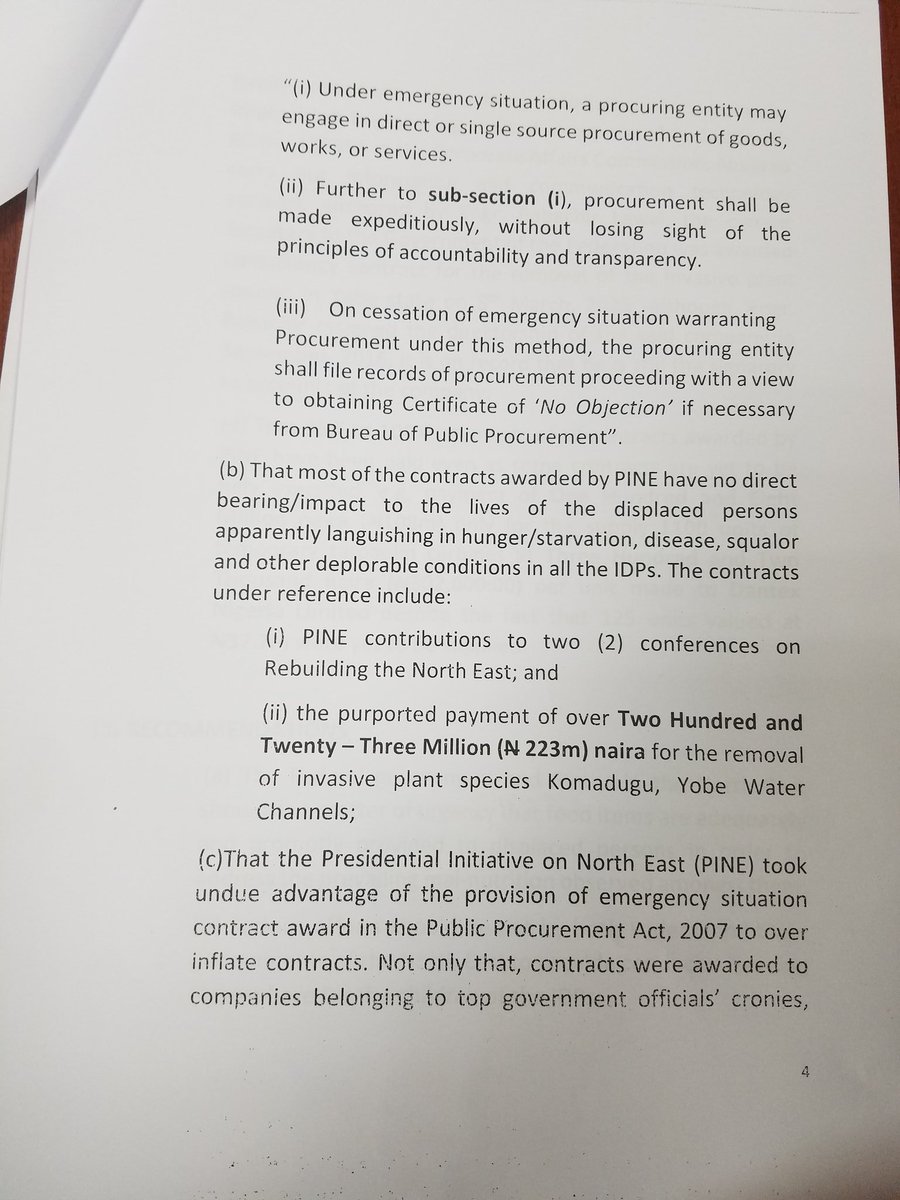