A Non-Governmental Organisation, Vendors for Positive Change Initiative has petitioned the Judicial Panel of Inquiry and Restitution instituted by Lagos State Government to probe the killings at Lekki Toll Gate in Lagos State during the  #EndSARS protest.

The petition was submitted by Mr. Gbolahan Bakare on behalf of Vendors for Positive Change Initiative.

In the petition, the Organisation asked the panel to investigate alleged fake news by DJ Switch (@dj_switchaholic), Falz (@falzthebahdguy) and others believed to be involved in the alleged massacre.

The petitioners asked the panel to invite all persons and organisation to substantiate their claims on the alleged killing of Lekki #EndSARS protesters before the judicial panel of inquiry and restitution holding in Lagos State.

Find below an abridged copy of the petition:

The Chairman
Judicial Panel of Inquiry and Restitution
Lagos State.

l write on behalf of the promoters and trustees of Vendors positive change Initiative, a Non-Governmental Organisation committed to the advancement of the Nigerian nation to request that your panel extend Invitation to all persons and organisations who promoted fake news and falsehood in relation to the alleged and unsubstantiated killing of EndSARS protesters at Lekki Toll Gate in Lagos State.

This petition is submitted in pursuant of our rights as enshrined in section 36 (2A) of the 1999 Constitution (as amended) which “provides for an opportunity for the persons whose rights and obligations may be affected to make representation to the administering authority before that authority makes the decision”.

It is our considered opinion that the activities of fake news promoters regarding the Lekki incident put to risk the stability of the Nigerian nation and specifically threaten our collective security as citizens.

As your panel is one that is saddled with the task of delivering restitution in this particular incidental case, it is our belief that there cannot be restitution without justice and fairness.

We, therefore, seek that your panel promote fairness in this matter by extending invitation to all those who have made varying degrees of inciting claims regarding what transpired at the Lekki Toll Gate on Tuesday, 20th October, 2020, including those who claim blank bullets were used, to physically appear before your committee to substantiate what they have said or claimed.

This, we believe, will help your panel to unravel the truth and deliver justice to all concerned. 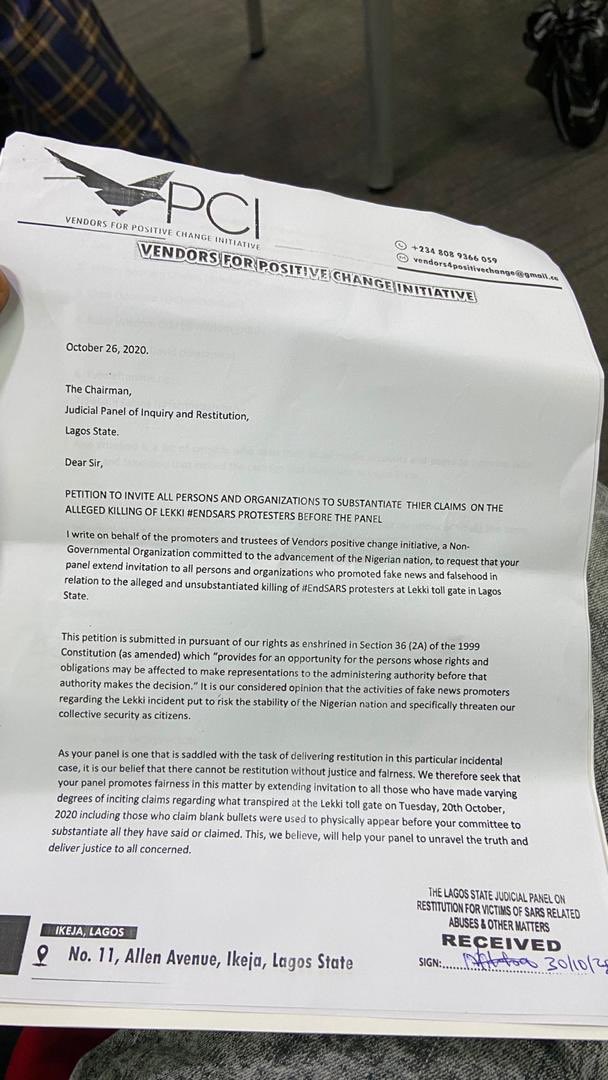 An Intimate Analysis of Ngozi Iweala And Her Chances With WTO ~ By Dr. Johnson Greg

Again, Soludo soars like an eagle as Hon. Aforka, Orumba North, endorses him for…