Elections for Oruk Anam, Ward 1, Unit 9, 10 and 11 are now holding at Don Etiebet’s house. Don Etiebet, a chieftain and leader of the APC hijacked the election materials and all INEC staff (including the ad hoc staff) are in his house when hoodlums are voting for the APC

The candidate of All Progressives Congress (APC) for the Etinan Federal Constituency is pushing for cancellation of election in all the wards and units in Nsit Ubium LGA. Our reporters learn that the reason Mr. Akpan is pushing for cancellation of the elections is because election did not hold in his Ward – Ubium South 2. It is learnt that election did not hold in Mr. Akpan’s Unit because he did not allow the officials of the Independent National Electoral Commission (INEC) to hold the election.

Our correspondent reached out to a  lawyer, Barr Uwen Jonah on the legal implication of the situation. According to Barr Jonah, elections cannot be cancelled in all wards merely because of the inability to conduct election in a particular area. In his word, ‘where election is unable to hold in a particular area, such inability to conduct the election cannot affect election conducted in other areas,’ said Barr. Jonah.   ‘Definitely, that is not the intention of the law,’ Barr. Jonah noted.

Our team of reporters at Ini LGA area just sent these accompanying pictures and explained that former House of Representative lawmaker and University lecturer, Prof Ini Udoka, in company of thugs stormed several polling units and unleashing violence on the people. 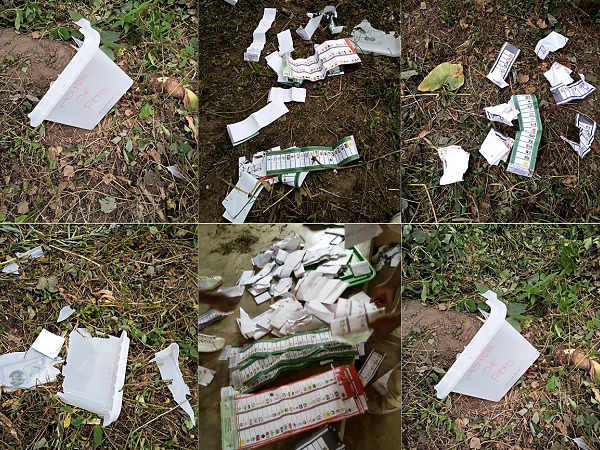 Pictured here is a woman who was already trying to get accredited but was mercilessly beaten by Prof. Udoka’s thugs. 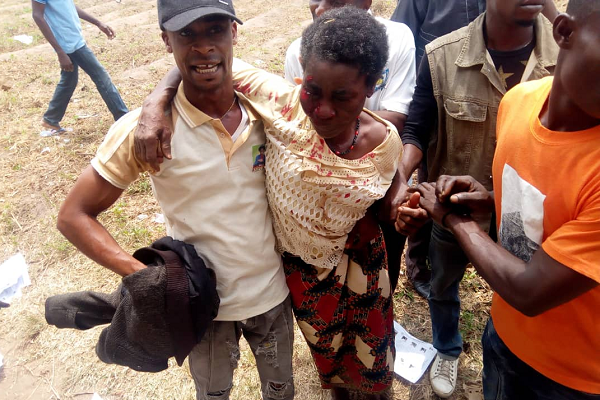 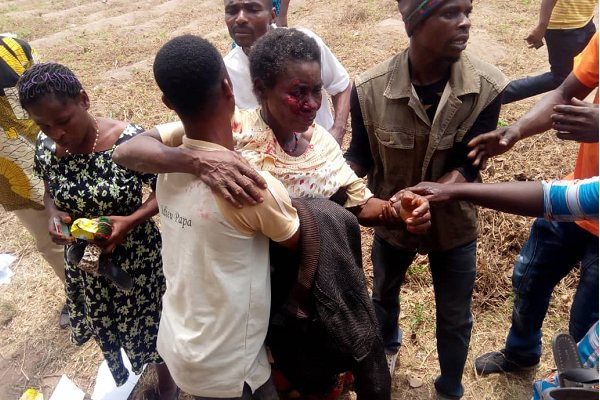 The people are agitating for the cancellation of the elections.

ESSIEN UDIM: Gunmen have hijacked all materials at Odoro Ikot Ward 2. The hoodlums were led by persons identified to work for Hon. Nse Ntuen and Emmanuel Akpan.

This is a reckless disregard for the electoral laws and regulations.

Ukpum Minya, ward 3 under seige by Comrade Ntokekpo,Youth Leader of APC, in the company of over 40 thugs.

All materials are still at the Ward Centre (St Paul’s primary School Ekparakwa).

Buses belonging to former deputy governor, Lady Valerie Ebe has been impounded and parked at the Mkpat Enin police station. The occupants working under the instruction Lady Ebe attempted to highjack materials meant for Ukpum Minya Ward 1 in Mkpat Enin.

Ukpum Minya, ward 3, Mkpat Enin LGA under seige by Comrade Ntokekpo,Youth Leader of APC, in the company of over 40 thugs.

Emerging information from our correspondent  in Essien Udim confirm that materials for Odoro Ikot 2 and Ekpenyong Ward 1, Essien Udim LGA have been hijacked by Hon. Emmanuel Akapn, the APC House of Reps Candidate for the constituency.

The PDP agents and the voters in the reported wards are calling for a total cancellation of the elections.

Correspondents from Uyo ward 2 unit 26 are that there are no INEC officials nor materials present at the moment.

Attempt by a member of the All Progressives Congress (APC) in Akwa Ibom, Mr Anietie Usen, to hijack released election materials for Afaha Akpan Ekpo in Etinan LGA, was stoutly resisted by the electorate at Registration Area Centre (RAC).

#NigeriaDecides2019 Just in: A member of @OfficialAPCNg in Akwa Ibom State, came in with a white Toyota Hilux and attempted to hijack electoral materials meant for Afaha Akpan Ekpo in Etinan LGA, with the 'PRESIDENCY' reg number, 01H-158 FG! @inecnigeria take note pic.twitter.com/fSnDUHjzlS

Usen is the Director, Commercial and Industrial Development in the Niger Delta Development Commission (NDDC), stormed the RAC at Ikot Udoabia in a tinted glass white Toyota Hilux with the ‘PRESIDENCY’ registration number, 01H-158 FG.

Anietie came with some unscrupulous individuals but met stiff resistance. He could not perpetuate his horrific plan.

Information from our correspondent in Abak has revealed that BARR EMMANUEL  UDOSEN has hijacked and is now in possession of all materials for Midim ward 2 units 6,7,8 and 9. The materials are currently at his residence at Midim, Abak where the materials are being manipulated for the APC

Our correspondent says the people of Midim are calling for the total cancellation of results in these units.

Agents from Ekpenyong Ward 1 and Odoro Ikot Ward 2 report that there are no elections whatsoever as the materials were hijacked by Hon. Emmanuel Akpan, APC House of Representatives Candidate for the Federal Constituency.

Information from Ibiono Ibom is that all materials for Ibiono Ward 2 unit 12 have been hijacked by Ita Enang, The SSA to the President on National Assembly matters and the Campaign DG for the APC Gubernatorial candidate in Akwa Ibom State. Reports from our correspondent is that he executed the plot with with the active aid of armed soldiers.

The electorates in the ward are agitated and are calling for the cancellation of elections.