Nigeria: Are Judges a basket of deplorables? 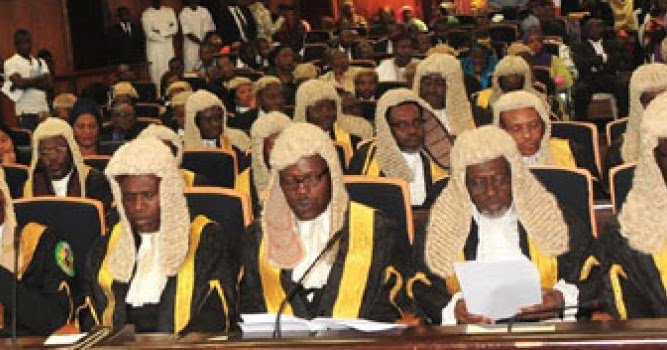 The current campaign season for the November 8th 2016 Presidential elections in the United States of America has brought out the good, the bad and the ugly about the American brand of democracy.

The two leading candidates: Mrs. Hilary Clinton of the Democratic Party and Mr. Donald Trump of the Republican party have been known for displaying some of the most acrimonious and sometimes personal insults that have remarkably signposted the 2016 electioneering campaign as the dirtiest in the political annals of the USA since the 1776 declaration of Independence.

In one of her most abusive political expressions, Mrs. Hilary Clinton stated thus: “You can put half of Trump supporters into what I call the basket of deplorables” .

Not done with her insults which she later recanted Mrs Clinton continued thus: “The rest of Trump supporters are people who are looking for change in any form.”

In Nigeria however, we are not observing any electioneering campaign but two major existential themes confronts the general public namely: the biting economic recession and the stark reality of pervasive corruption in the three arms of government viz judiciary, legislature and executive.

Vice President Professor Yemi Osinbajo is the latest high profile public office holder to confirm that Corruption has since birthed in the vicinity of the three Arms zone.

Similarly, in a book that has gained notoriety for arousing disputations around the credibility of much of the claims, the American writer Mr. John N. Paden wrote thus: “(Buhari’s) passion for change and national unity were evident in his espousal of basic democratic practices, and the need for the country’s leadership to be responsible to the concerns of the Nigerian people.”

Quoting Buhari’s May 29th 2016 speech, Mr. Paden wrote thus: “The last twelve month have been spent collaborating with all arms of government to revive our institutions so that there are more efficient and fit for purpose: that means a bureaucracy better able to develop and deliver policy; an independent Judiciary, above suspicion and able to defend citizens’ rights and dispense justice equitably;  a legislature that actually legislates effectively; and above all, political parties and politicians committed to serving the Nigerian people rather than themselves” (apologies to the book: “Muhammadu Buhari: the challenges of leadership in Nigeria” by John N. Paden).

For long, the Judiciary stinks of pervasive corruption even as most Nigerians have often clamored for a holistic war against corruption and bribery in that strategic sector of the Nigerian State because of the role it plays as the arbiter which dispenses justices to all irrespective of the status, or class of the litigants (see section 6 of the Constitution of the Federal Republic of Nigeria of 1999 as amended ).

The Judiciary is seen as the last hope of the common man, but for over two decades, the cases of bribes-for-judgments that have saturated the judicial system have completely derailed quick and efficient dispensation of justice.

The bad reputation of some bribe seeking jurists has compelled some persons in the street to go for jungle justice of lynching to death suspected petty criminals rather than hand then over to the compromised police to prosecute in the highly corrupt judiciary in Nigeria.

Perhaps it’s on this ground that DSS which is created to prevent terrorism and crimes against the Nigerian State has decidedly qualified bribery and corruption as terrorism and since most Nigerians rate some judges as basket of deplorables it therefore follows that these same people wouldn’t mind if Satan himself is deployed to hunt after bribe seeking judges.

The many bad eggs in the Judicial arms have over the years allowed the authoritarians in the executive arm of government to dictate to them how to dispense justice in cases of citizens’ before them.

Twenty five years ago during the then Major General  Muhammadu Buhari -led military tyranny, the most vociferous critic of the military rule and globally acclaimed singer the Late Fela Anikulapo Kuti was railroaded into prisons by the military junta using the highly compromised judiciary over trumped up charges of money laundering.

Fast forward to few weeks back when the Department of State Services under the Nigerian Presidency was deployed to invade homes of two supreme court judges and some Federal High Court Judges in the wee hours of the morning in what was later described as ‘sting’ operation in search of alleged bribes paid out by rich litigants which some of the Judges were said to have kept in their homes.

However, in one instance, the invasion of Justice Nnamdi Dimgba’s home in Abuja was done without valid search warrant and his brother who was found at home was beating blue and black by the security operatives.

Justice Nnamdi Dimgba is the presiding Judge in a matter between a suspect and the DSS. The Judge is known to have berated the DSS for flouting valid orders of the court in that particular matter. His home was invaded barely 48 hours after he openly reprimanded the DSS in court and this illegality has completely rendered the invasion as a big nullity and a vendetta.

But speaking seriously about the ever threating menace of corruption in the Judiciary, most Judges are  seen as ‘basket of deplorables’.

Currently, both the DSS and the EFCC have gone after some judges they accused of bribery and corruption. One of them Justice Ofili Ajumogobia a woman was accused by Economic and Financial Crimes Commission of illegally transferring $900,000 USD to an offshore account.

Two Supreme Court Justices: Inyang Okoro and Sylvester Ngwuta were amongst the nine arrested recently and thrown into the DSS cells in Abuja and released on administrative bails pending prosecution.

These scenarios of late night arrest of Judges has however pitted the National Judicial Council and the Nigerian Bar Association in  collusion course because the disputed winner of the Presidency of NBA Alhaji. A.B. Mahmoud has been caught engaging in double speak on this same matter.

He had initially condemned the invasions which he described as illegal and demanded unconditional release of the Judges.

But when the officials of the DSS threatened to deal with the NBA if it stands on its way whilst it continues to arrest and prosecute judges for corruption, the NBA disputed  president quickly backslided and recanted urging that accused Judges should step down pending their clearance.

The statement by the NBA President is interpreted as standing logic on its head since under the Nigerian Constitution all accused persons are innocent in the eyes of the law until contrary determination is reached in the competent court of law.

Whilst some Senior Advocates of Nigeria like Chief Olisa Agbakoba say DSS has no mandate to arrest Judges for alleged corruption, the Chief Justice of Nigeria has been consistent in stating that the DSS which is under the executive arm of government has no constitutional right to infringe on the principle of separation of power since NJC has the statutory mandate to discipline Judges for misconduct.

The National Judicial Council headed by the Chief Justice of Nigeria in a publication in some  newspapers signed by Mr. Soji Oye, the Director of Information States as follows: “NJC maintains its earlier decision that it is not amenable to Judicial Officers being invited by any Institution, including the DSS, without complying with the Rule of Law and Due Process. That explains why when the DSS wrote to the NJCby letter Ref. No. LSC.960/4 dated 14th September, 2016, to direct Hon. Justice Mu’azu Pindiga to appear before it, The Hon. Chief Justice of Nigeria and Chairman of NJC, directed the Hon. Chief Judge of Gombe State to ask Hon. Justice Mu’azu Pindiga to report to DSS, which His Lordship did.”

“NJC has never shielded nor will it shield any Judicial Officer who has been investigated by it and found to be guilty of misconduct and or being investigated by the Police or EFCC or ICPC for criminal offence or financial crime; or by DSS on a matter bordering on State security, so long as the process is in compliance with the Rule of Law and Due Process”.

The NJC affirmed further: “If the misconduct is also criminal in nature, NJC has not and will not stop the Judicial Officer from being prosecuted by the Police or EFCC or ICPC, so long as the mechanism is in line with the Rule of Law and due process.”

NJC cited section 158 of the Constitution to assert her independence as a body statutorily charged with the functions of disciplinary issues of judicial officers.

Even as the argument go on regarding the rightness or wrongness of the DSS arrest of Judges, most Nigerians say that the basket of deplorables who have infested the temple of Justice with their corrupt tendencies must be death with forthwith in accordance with the rule of law.

The Catholic Archbishop of Abuja Diocese, Cardinal John Olorunfemi Onaiyekan has characteristically called for a thorough investigation of the judges arrested over allegations of corruption, describing the development as a national embarrassment.

Onaiyekan, who said this in Ilorin, Kwara State at the weekend, expressed disappointment with the way the National Judicial Council (NJC) handled some matters relating to the allegedly corrupt judges. He, however, called for a thorough investigation into all the cases affecting judicial officials, insisting on transparent investigation.

The cardinal declared the support of all Catholic bishops in the country to the fight against graft. He, however, warned against the abuse of fundamental human rights. Onaiyekan said the entire world was now watching how the Buhari government is tackling corruption hence the need for suspects to be given fair hearing.

The sentiments of the Metropolitan Bishop of the Catholic Archdiocese of Abuja represents the sum total of what Nigerians expect should happen to those who are basket of deplorables within the judiciary.