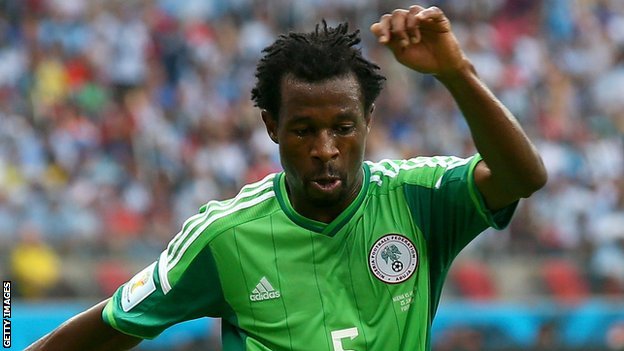 The Syper Eagles has qualified to the next round of the 2018 World Cup. The eagles won the visiting Swaziland team by two unreplied goals.

Nigeria scored twice at home to beat Swaziland 2-0 on aggregate and progress in Africa’s qualifiers for the 2018 World Cup.

The Super Eagles of Nigeria is currently playing a goalless draw with Sihlangu of Swaziland at the Adokiye Amiesimaka Stadium in Port Harcourt, Rivers State.

The two teams played out a goalless draw also in Lobamba, the capital of Swaziland.

Earlier, the Governor of Rivers State Nyesom Wike had promised the Eagles 20,000 dollars to the team for each goal scored.

The Super Eagles were toothless in front of goal in the first leg, which ended 0-0, and needed 52 minutes of the return game to make the breakthrough.

Moses Simon fired them ahead, finally ending the resistance of a team they were expected to sweep aside.

A second goal was added by Efe Ambrose on 88 minutes before Swaziland had Phumlani Dlamini sent off when he was shown a second yellow card.

They join Democratic Republic of Congo, Gabon, Guinea, Morocco, Uganda and Zambia – who had already played their second legs – in the group stage.

Kicking off next October, the 20 second-round qualifiers will form five groups of four teams with the winners of each group booking their place at the finals in Russia.

Another of the continent’s heavyweights, Ghana, secured their passage in very similar fashion to Nigeria.

Having been held 0-0 to Comoros in the first leg, the Black Stars hit two goals without reply in the return match to go through 2-0 on aggregate.

Wakaso Mubarak grabbed the opener and Swansea striker Jordan Ayew added the second late on. And just as Swaziland ended their match with 10 men, so too did Comoros when Omar Mdahoma received a second yellow card with eight minutes remaining.

Libya were the first team on Tuesday to book their place in the next round after a 3-1 win in Rwanda gave them a 4-1 aggregate victory.

Khumaj put the visitors ahead in the second leg to put them in control of the tie.

Rwanda’s Jacques Tuyisenge made it 1-1 on the day and offered his side some hope of a comeback but Libya pulled away thanks to a brace from Mohamed Ghanudi.

And Cameroon are through, despite being held to a 0-0 draw at home to Niger. The Indomitable Lions secured their passage in the first leg with a 3-0 win.

Congo finally emerged victorious after a fantastic tussle with Ethiopia, the Red Devils winning their second leg 2-1 to go through 6-4 on aggregate.

Ethiopia’s Getaneh Kebede scored the opening goal of the second leg to level the tie at 4-4 on aggregate.

But Francis N’Ganga nudged Congo ahead overall when he made it 1-1 on the day and Thievy Bifouma’s strike sealed his side’s victory.