Nigeria have never had Free and Fair Election – Gov. Ugwuanyi 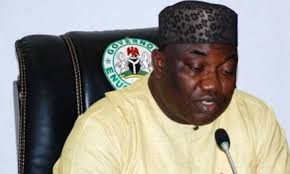 There has been no free and fair election in Nigeria in the last couple of years, according to Gov. Ifeanyi Ugwuanyi of Enugu State.  Gov. Ugwuanyi said this in Enugu when the Constitutional and Electoral Reform Committee led by Sen. Ken Nnamani paid him a courtesy call.

He said that it had become imperative to put in place a robust electoral act that would engender peace and stability in the polity.

He emphasized the need for reform, according to him, the need for the ongoing reform could not be overemphasised.

“It is a well known fact that our inability to conduct free and fair elections had impacted negatively on our efforts to deepen democracy over the years.

He  commended the committee for giving the South-East zone the opportunity to send their views on how to entrench credible, acceptable, violence and rancor free election in Nigeria.

Earlier, the Chairman of the committee, Sen Nnamani said that the exercise was aimed at making elections more efficient, effective and less expensive.

Nnamani ststed, that President Muhammadu Buhari had on Oct. 4, 2016 inaugurated the committee in keeping to his promise of strengthening electoral system in Nigeria.

“Most people are asking why another electoral reform panel is being set up when that of Justice Uwais has not been implemented.

“Though Uwais did a fantastic job but some areas of that report require panel beating and dynamic approach to capture some incidents in the system.

“For instance, that report did not take into consideration what happened in Kogi State not too long ago,” he said.

Nnamani said that it had become needful to tinker some obsolete electoral laws, adding that the committee had been working in clusters and behind the scene.

“There is no constitutional requirement for public hearing but it has become conventional that no group has monopoly of knowledge.

That is why we have come to seek the ideas of the public,” he said.

Nnamani said that the South-East zonal public hearing in Enugu was the first of seven of such that would hold across the country.