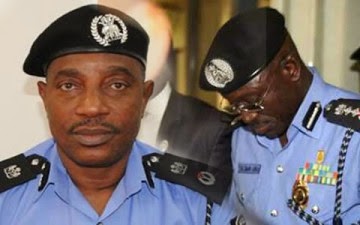 INSTITUTIONALIZING CORRUPTION IN ANAMBRA STATE POLICE COMMAND BY THE DEPUTY COMMISSIONER OF POLICE IN CHARGE OF THE STATE CRIMINAL INVESTIGATION DEPARTMENT.

ABOVE: Nigeria’s present and former IGP, Arase and Suleiman

The Inspector General of Police

It is with deep dismay that the Civil Liberties Organization, Anambra State Branch writes your office on the above subject matter.

Ifeatu Ibegbu, ‘30’, a tricycle driver was arrested by police on the 20th November, 2015 at Onitsha for allegedly being in possession of three wraps of weeds suspected to be Indian hemp. He was detained at Inland Town Police Station until November 28, 2015 when he was transferred to the State CID Awka. At Inland Town Police Station, the family of Ifeatu were asked to pay the sum of #15,000.00 (Fifteen Thousand Naira) as a bail fee but they could not muster that sum early enough, hence the transfer.

At the State CID, the IPO, Mr. Clement (rank and surname unknown) told the family of ifeatu that bail fee to be paid has increased to #150,000.00 (one Hundred And Fifty Thousand Naira) explaining that bail fee for a matter at the State CID is not the same with that of  the one at Police Division level. The family begged him for days until he reluctantly reduced the amount to #100,000.00 (one hundred thousand naira) which the family still could not afford.

Incidentally, Ifeatu became critically ill and collapsed in the cell on December 3, 2015 and was rushed to the Clinic where he was resuscitated. He was admitted in the clinic and administered with medication till the following day when he was discharged and returned to the State CID. Following the foregoing, our office was contacted for assistance and we detailed our Legal Secretary, Comrade Justus U. Ijeoma, Esq to go with the family to the State CID and solicit for his bail. The IPO agreed with our Comrade that the matter is a bailable offence and that the suspect would be given bail, but insisted that the bail fee, which he told those that came earlier, must be paid before the suspect could be released. Upon refusal to accede to his monetary requirement for bail, he referred our Comrade to another officer whom he introduced as his Superior in their team. The said superior of his reiterated the demand but added that if he could not pay he should go and wait for them in court.

Our Comrade then went to the Deputy Commissioner of Police, DCP in Charge of the State CID and complained to him.  The DCP, after listening to our Comrade sent for the IPO. The IPO did not deny the demand for bail fee but narrated that the suspect was caught with weeds suspected to be Indian hemp. At this point, the DCP told our Comrade that what the suspect has committed is a criminal act and that if he wants his freedom back that he should pay for it.

He was promptly reminded by our Comrade that it is also illegal and criminal for the IPO to be making monetary demand as a sine qua non for the bail but he tried to rationalize and pontificate that all those monies they collect are deployed in expenses such as payment the suspect’s hospital bills. When our Comrade informed him that all the medical expenses for the treatment of the suspect was fully paid for by the family, he took another turn by telling us that the government does not provide for things like electric bulb and stationeries for them. The DCP told our Comrade that he has finished with them, that we are left with the following options: either we pay and get the suspect released or we go and wait for them in court. While this unhidden express support was coming from the topmost echelon of the Police formation, the IPO beamed with smiles of “victory”. He, the IPO even taunted our Comrade as they came out of the DCP’s office.

Not deterred by the unfortunate stance of the DCP, our Comrade moved to the Command Headquarters to complain to the Commissioner of Police. But due to the fact the CP was not on seat, he met with the 2ic Command, DCP Makama and complained to him. DCP Makama explained to our comrade that the DCP, SCID is his coeval and so he does not have oversight over him, but advised that our Comrade should wait for the CP to return to office as he, according to the DCP Makama did not go far. Our comrade to him that ye acknowledges the fact that they both are of the same rank of DCP, but maintained that he can advise the DCP, State CID as both of them are friends. On this note DCP Makama told our Comrade that he should go back to the DCP, SCID promising to call him on phone.

On getting back to the SCID, our Comrade met the IPO and another woman police officer (the latter was later to known as the IPO’s Sectional Head) at the DCP’s reception waiting to see the DCP. He did not know that the health of the suspect started relapsing again and so they started making frantic effort to release him on bail. When the people inside the DCP’s office came out, our Comrade entered along with the Sectional Head and the IPO. The Sectional Head requested the DCP for approval for the suspect to be released and the DCP told her that if she considers it appropriate that she should go ahead and release him.

Our Comrade tried to explain to the DCP that he was asked to return to him by the 2ic Command, DCP Makama, but the former told him that he has just given directive to the Sectional Head right before him. Coming out from the DCP’s office, the IPO promptly filled the Bail Bond after our Comrade had made a written application for the bail of the suspect. Both the suretee and the suspect duly signed the bond and the IPO sent the file to the Sectional Head for action. When the IPO returned from the Sectional Head’s office he told our Comrade that his madam has signed but that the DCP had gone out and that they should wait for him to return and make the final endorsement. When our comrade waited for a long time and the DCP did not return, he expressed skepticism over the entire development but the IPO in order to convince him that all was well showed him where the Sectional Head minuted on his application, recommending to the DCP for the suspect’s release. The IPO advised our Comrade that if he had other things to do that he should go while the sisters of the suspect wait behind for the DCP to return and approve the Bail Bond.

It is disheartening Sir, that the family members waited at the State CID till about 7.30Pm despite the fact that the DCP returned shortly after our Comrade had left. More regrettably Sir, because the family did not give the money as demanded by the DCP, the Suspect was transferred to the National Drug Law Enforcement Agency, NDLEA at about 8.00pm to punish him for our refusal to comply with the unlawful demands of the DCP. The decision to transfer the suspect for our failure to subscribe to the DCP’s avaricious tendencies is purely persecutory, if not why did they have to keep him for that long in custody while negotiation for bail fee lasted only to remember to transfer him when the negotiation process collapsed as a result of our involvement.

We call on you to investigate the activities of the DCP, SCID as the head of one the most critical investigative arms of the police in the State if found culpable he must be brought to justice in accordance with our extant laws. We are in serious doubt if the DCP is fit to remain in the police force, not to talk of heading a department as important as the CID. His acolytes both at the State CID and at the Inland Town Police Station should not be left out in the investigation.

Investigation is very fundamentally critical to the effective administration of criminal justice in any legal system and so must not be allowed to be manned by people of questionable integrity and warped mindset such as the DCP has unabashedly demonstrated in the foregoing case. Consequently, we call for immediate removal of the DCP and all the officers he has already infested with his “cash-and-carry” attitude to investigation from the State CID pending the outcome of the investigation.

This offers you an ample opportunity to put to a practical test, your anti-corruption posturing, which culminated in the recent official launching of your Complaint Response Unit, CRU. Laudable as the initiative is, it must produce the desired result of not only offering the populace the platform to complain against the unlawful, unprofessional and unethical conducts of errant officers, but the citizenry must through the instrumentality of the initiative see justice administered and redress given where appropriate.

We hope that this petition will receive the urgent attention it deserves.

The President and Commander in Chief of the Armed Forces

The Hon. Minister of Interior

The Executive Governor of Anambra State

The Southeast Based Coalition of human Rights Organisation

The International Society for Civil Liberties and Rule of Law