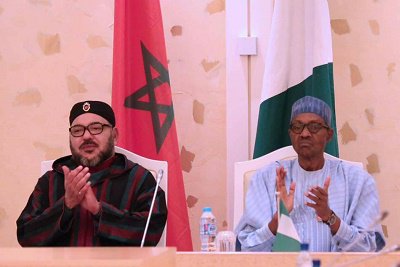 Nigeria has signed twenty-one bilateral agreements with Morocco including an agreement to construct a regional gas pipeline connecting Nigeria and the North African Kingdom.

This is to foster regional economic integration, a communiqué released on the visit of Moroccan King Mohammed VI at the State House, Abuja reveals.

This was the high point of a two-day working visit of King Mohammed (VI) of Morocco to Nigeria.

The Minister of Foreign Affairs, Dr Geoffrey Onyema who read the communique said the gas pipeline project would accelerate energy and electrification projects across the affected member countries.

“It is a great honour and privilege to read for you a communique which outlines the strategic visions that you both have for our two countries.

“On the occasion of the visit of His Majesty King Mohammed VI to Nigeria and following the discussion with President Muhammadu Buhari in Marrackeck.

“On the side line of the Conference of the Parties (COP-22) and also in Abuja, the Kingdom of Morocco and the Federal Republic of Nigeria decided to study and take concrete steps.

“This is toward the promotion of a regional gas pipeline project that will connect Nigeria’s gas resources, those of several West African countries and Morocco.’’

He stated that the pipeline project would be designed with the participation of all stakeholders with a view to creating a competitive regional electricity market with the potential to be connected to the European energy markets.

For two days President Muhammadu Buhari and the visiting King of Morocco engaged in bilateral talks that centered on how to cement relations between Nigeria and Morocco.

With businessmen from Nigeria on one end and those from Morocco on the other, the discussions culminated to the signing of several agreements aimed at galvanizing development between them.

Government’s effort towards diversifying the economy away from oil led to the signing of the agreement on fertilizer production.

Briefing State House correspondents after the meetings, the Senior Special Adviser to the President on Media and Publicity, Mr Femi Adesina, described the agreement on fertilizer as one that would boost agricultural production in the country.

For the gas pipeline agreement, the ministers of foreign affairs of the two countries, said that the agreement is aimed at accelerating electricity development in the region.

They also spoke on the multiple industrial opportunities for the two countries as part of the strategic vision of the two leaders.

Agreements were also signed on promotion and protection of investments, agriculture, banking, science and technology, and sustainable development.

Foreign observers have said that Nigeria and Morocco have a lot to benefit from the collaboration following the King’s visit.

Elumelu made his stance known after participating in the signing ceremony of two of the bilateral agreements, at the State House, Abuja, on Saturday.

Elumelu, who is the founder of Tony Elumelu Foundation, commended President Muhammadu Buhari for his foresight and vision for the nation.

“To me, what happened here today is just beyond one sector. We have seen the delegation of Morocco and we have also seen our own Nigerian private sector people.

“What we have done today in my view point will help further shorten our recession and take us to economic prosperity and boom again.

“So, what has happened today is good and a big plus for our government and our President,’’ he said

Gov. Abubakar Badaru of Jigawa, who also spoke after the ceremony, described the signing of the agreement on the gas pipeline project as “a wonderful development’’ for Nigeria.

He said that many West African countries would witness economic prosperity as a result of the gas pipeline project.

“The gas pipeline is a wonderful development for the country. It will help the African regions as the pipeline passes across so many countries.

“We heard that power, fertilizer plants will be built, and many other developmental activities are going to happen around this agreement.

“So, I believe it will help the state governments because the economic fortune of the country will improve and when they improved it will reflect on the economies of the states.

“There will be job creation and a lot of employment and it is the citizens of the states that will benefit from the job creation.’’

He said that Nigeria and the Kingdom of Morocco also agreed to develop integrated industrial clusters in the sub-region in sectors such as manufacturing, Agro-business and fertilizers to attract foreign capital and improve export competitiveness.