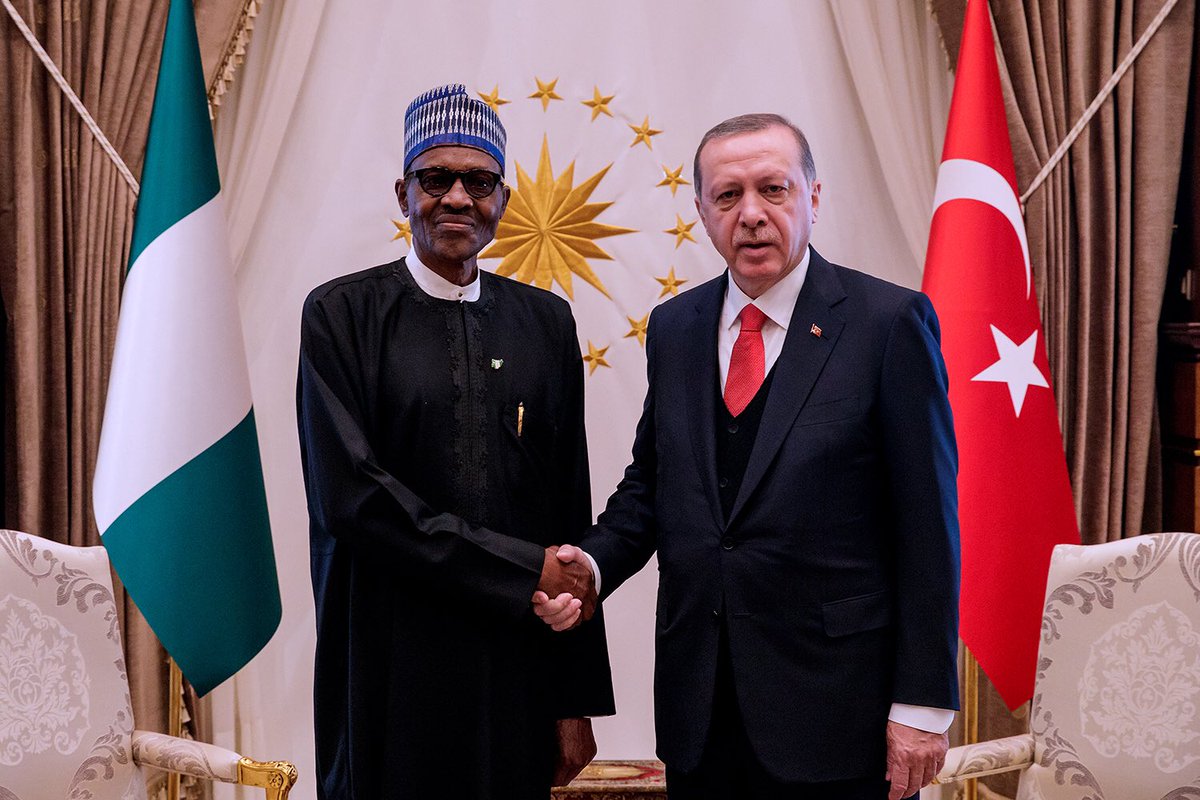 President Muhammadu Buhari and President Recep Tayyip Erdogan have agreed, after talks, on Thursday in Ankara to strengthen cooperation between the security agencies of both countries to counter terrorism.

Speaking at a joint press conference after a tete-a-tete with his host, President Buhari said he was ‘‘very pleased’’ that the defence ministers of both countries held extensive discussions on developing new strategies for counter-terrorism.

‘‘We are very pleased with the progress of the meeting so far and we are going to wait for the details of meetings between the two countries.

‘‘We will as a result of the meeting between the ministers and officials of both countries strengthen rapidly whatever their recommendations are,’’ the President said.

Commenting on the degradation of Boko Haram in Nigeria, President Buhari said the improved security situation in the North East was an eloquent testimony to the efforts of his administration in combating terrorism since he came into office in May 2015

‘‘We were very surprised and disturbed by the claim made by Boko Haram on what they have been getting from ISIS.

‘‘We know we will be able to contain them and we have proven that we can do it.

‘‘We are very pleased that Turkey is in a position to assist us and has been strengthening our educational and health institutions,’’ President Buhari said.

The President said the two leaders also discussed the prospects of increasing their bilateral trade, which has exceeded 779 million USD in the first eight months of 2017.

‘‘There are a lot of potentialities in terms of investments and a lot is being done in the educational and health sectors in Nigeria.

‘‘These will be strengthened and I assure you that Nigeria is prepared to accept Turkish business people to come and explore more of Nigeria’s potentialities,’’ the Nigerian leader said.

In his remarks, Erdogan said Nigeria had great potentials and remains “a global actor in terms of economy, demographics and its peacekeeping records.”

He indicated that Turkey was interested in investing in Nigeria’s electricity, refineries and gas sectors, adding that increasing the flights between Turkey and Nigeria would further improve commercial and people-to-people relationships.

On the fight against terrorism, the Turkish leader said: ‘‘there is no difference between Boko Haram, Fethullah Terrorist Organisation or Daesh (ISIS), which have all killed, inflicted pain and hardship on innocent people.

‘‘All of these organisations are hordes of murderers that feed on the innocent people, and in the fight against terrorism, we will stand with our Nigerian friends, and we are ready to share our experience and provide all kinds of support.

‘‘We also expect the same cooperation from Nigeria in fighting against Fethullah that murdered 250 Turkish citizens last year,’’ he said.

Rally For Buhari: we need each other to succeed, Femi Adesina tells South east group