An economist from John Hopkins University in Baltimore, US, Steve Hanke, has ranked Nigeria as the sixth most miserable country in the world.

Writing in the Forbes magazine of March 28, the economist notes that Misery Index is calculated using economic indices such as unemployment, inflation and the rates banks charge on loans.

Thailand and Hungary rank as the least miserable countries in the world on the 2018 Misery Index, having ranked 95th and 94th respectively of the 95 countries ranked by Hanke.

Venezuela, Argentina, Iran, Brazil and Turkey lead in that order, while Nigeria is sixth.

See the full report as published by Forbes:

The human condition inhabits a vast continuum between “miserable” and “happy.” In the sphere of economics, misery tends to flow from high inflation, steep borrowing costs and unemployment. The most surefire way to mitigate that misery is economic growth. All else equal, happiness tends to blossom when growth is strong, inflation and interest rates are low, and jobs are plentiful.

Many countries measure and report these economic metrics on a regular basis. Comparing them, nation by nation, can tell us a lot about where in the world people are sad or happy.

Would you consider, for instance, Thailand to be more or less miserable than other countries? To answer this question, I update my annual Misery Index measurements.

The first Misery Index was constructed by economist Art Okun in the 1960s as a way to provide President Lyndon Johnson with an easily digestible snapshot of the economy. That original Misery Index was just a simple sum of a nation’s annual inflation rate and its unemployment rate. The Index has been modified several times, first by Robert Barro of Harvard and then by myself.

My modified Misery Index is the sum of the unemployment, inflation and bank lending rates, minus the percentage change in real GDP per capita. Higher readings on the first three elements are “bad” and make people more miserable. These are offset by a “good” (GDP per capita growth), which is subtracted from the sum of the “bads.” A higher Misery Index score reflects a higher level of “misery,” and it’s a simple enough metric that a busy president, without time for extensive economic briefings, can understand at a glance.

The accompanying table contains Misery Index rankings for the 95 nations that report relevant data on a timely basis. For consistency and comparability, and with few exceptions, data were retrieved from the Economist Intelligence Unit.

Let’s start with two of the least miserable countries and work down into the pits.

Thailand takes the prize as the least miserable country in the world on the 2018 Misery Index. It’s 2018 rank of No. 95 out of 95 countries is a stunner. The military junta delivered happiness, and as a result, the pro-military PPRP was rewarded earlier this week at the polls. Indeed, the PPRP raked in the largest popular vote, even though the vote count is currently embroiled in controversy.

Hungary delivered yet another stunner, making a dramatic improvement from 2017 to 2018.  It comes in at No. 94 as the second least miserable country in the world. While the European Union and the international elites have thrown everything they can throw at Prime Minister Viktor Orbán, it’s easy to see why he commands a strong following at home. After all, the Magyars were the 2nd happiest in the world in 2018. 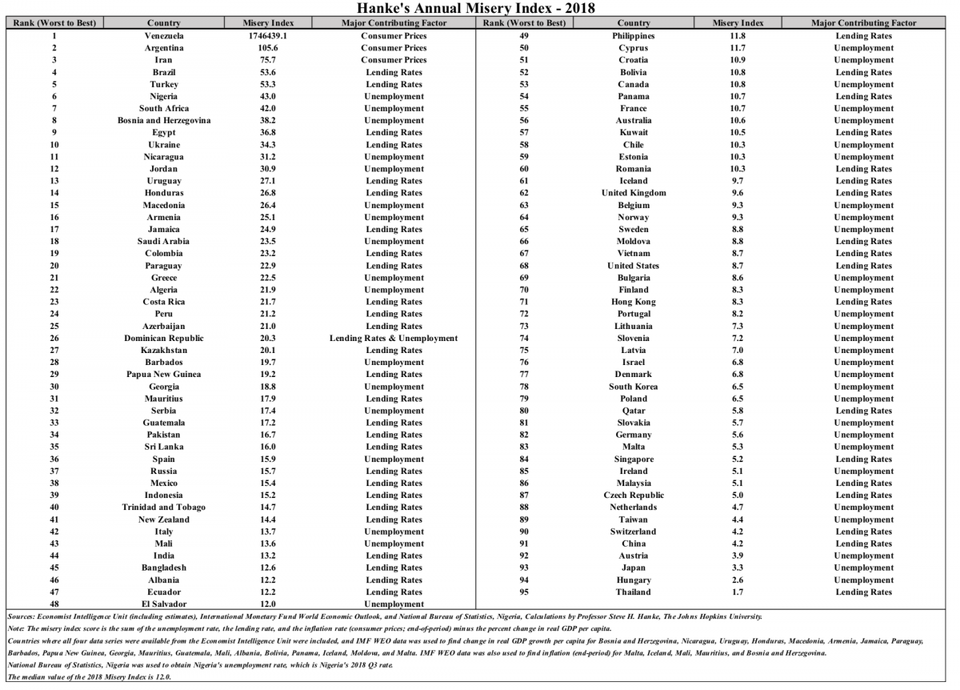 Now, let’s take a long dive into the bottom of the pits.

Venezuela holds the inglorious title of the most miserable country in the world in 2018, as it did in 2017, 2016, and 2015. The failures of President Nicolás Maduro’s socialist, corrupt petroleum state have been well documented over the past year, including by my measurements of Venezuela’s hyperinflation. Not only is Venezuela the most miserable country in the world, but its Misery Index score has dramatically increased during the past year, as the economy’s collapse has accelerated.

Iran, like Argentina, is burdened with the weight of a non-credible central bank and a junk currency. Thanks to the tanking Rial, Iran’s inflation jumped in 2018, and so did its Misery Index score, moving Iran from the 11th most miserable country in 2017 to the No. 3 spot in 2018.

Brazil slipped from No. 3 to No. 4 in the ranking of the miserable. As my close friend Roberto Campos — the late Brazilian economist, diplomat and politician — once explained to me during a visit to Brasília: The Brazilian Constitution is as thick as the New York City telephone book and is full of little more than rights and entitlements. President Bolsonaro has his work cut out for him. To improve his country’s ranking, he will have to deliver on his promise to reform Brazil’s bankrupt pension system.

Is The Court Still The Last Hope Of The Common Man?

Couple With 2 Kids, 9 Others Die In Bauchi Road Crash