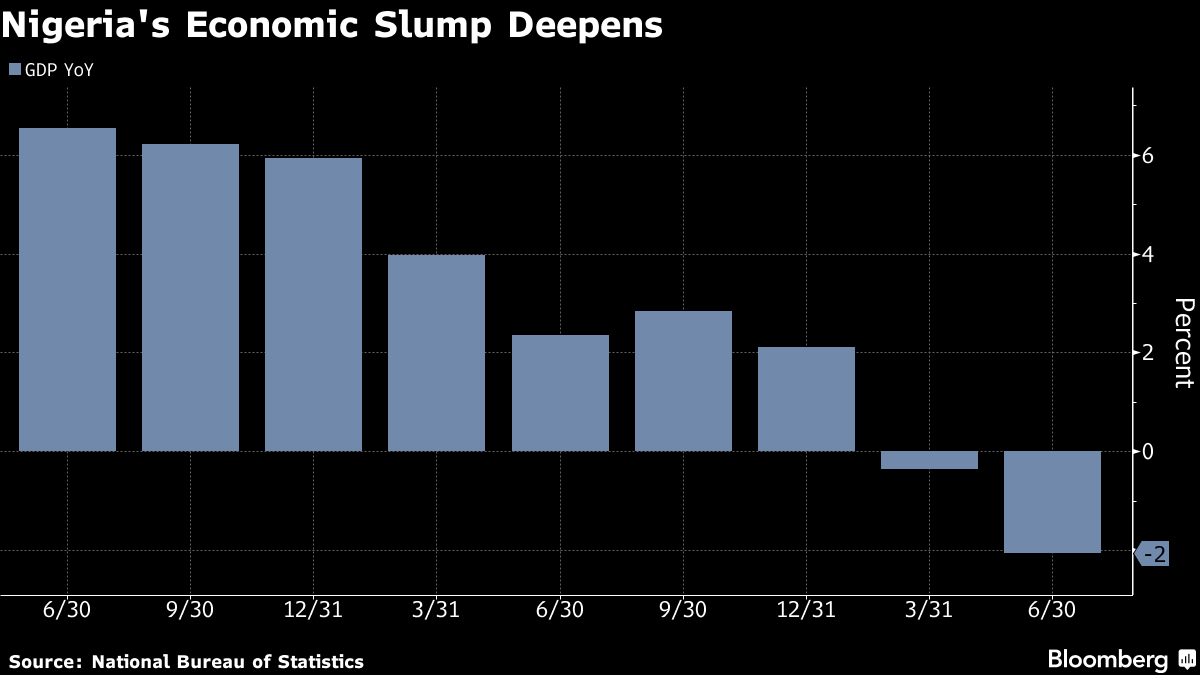 The Nigerian Bureau of Statistics, NBS, has confirmed that Nigeria is in its worst economic recession since 1986, as the economic slump deepened in the second quarter as a declining oil industry weighed on output.

NBS also revealed that the total number of Nigerians who became unemployed within the first and second quarter of 2016 now stands at 2.6 million.

Nigeria’s sovereign dollar bonds immediately fell across the curve to their lowest level in more than two weeks after official data showed the economy contracted by 2.06 percent in the second quarter, sending Africa’s biggest economy into its first recession for 25 years.

Data from the Nigerian Bureau of Statistics (NBS) showed the non-oil sector declined due to a weaker currency while lower oil prices dragged the oil sector down.

Gross domestic product in Africa’s most-populous country contracted by 2.1 percent in the three months through June from a year earlier, the Abuja-based National Bureau of Statistics said in an e-mailed statement on Wednesday, after shrinking 0.4 percent in the first quarter. The median of 17 economist estimates compiled by Bloomberg was for a 1.6 percent contraction.

Nigeria suffered a revenue squeeze after oil prices slumped by half since mid-2014, and crude exports fell by over 20 percent in the second quarter as militants in the Niger River delta blew up pipelines and reduced output. This was exacerbated by the Central Bank of Nigeria’s currency peg that led to a lack of dollars in the economy, curbing imports and causing shortages from fuel to industrial materials.

Crude production fell to 1.69 million barrels per day in the second quarter, from 2.11 million barrels in the three months through March, the statistics office said. The oil industry contracted by 17.5 percent in the period. The non-oil sector, which includes manufacturing, banking and agriculture, shrank 0.4 percent. The economy as a whole expanded 0.8 percent compared with the previous quarter, according to the statistics agency.

“The key point from today’s data is that there was a very poor performance across almost the entire economy,” John Ashbourne, an economist at London-based Capital Economics Ltd., said in an e-mailed response to questions. “Every engine has blown out.”

While the government planned to stimulate the economy with a record 6.1 trillion naira ($18 billion) budget this year, it delayed approving the spending plans as President Muhammadu Buhari haggled with lawmakers over allocations. The government collected 1.16 trillion naira in revenue, or about half of what it expected, in the second quarter compared with 1.27 trillion naira in the previous three months, the central bank said in a report Aug. 26.

The slump in oil, the nation’s biggest revenue earner, as well as shortages of foreign currency and power could cause the economy to shrink 1.8 percent this year, according to the International Monetary Fund. That would be Nigeria’s first full-year contraction since 1991, according to data from the nation’s statistics agency. The economy will fare better in 2016 than the IMF forecast, Adeyemi Dipeolu, a special adviser on economic matters to Buhari, said in an e-mailed statement on Wednesday.

Price growth accelerated to 17.1 percent in July, the statistics office said in a separate report on Wednesday, the highest rate since October 2005. The MPC will announce its next policy move on Sept. 20. The naira was unchanged at 338.96 per dollar by 10:20 a.m. in Lagos on Wednesday.

“There is little evidence of the ability of businesses to pass on price increases, despite the pressure on prices largely driven by Nigeria’s foreign-exchange shortage,” Razia Khan, head of Africa macro research at Standard Chartered Plc on London, said in an e-mailed note to clients. “We expect a further 200 basis points of tightening at the next MPC meeting.”

Murray, Johnson advance to US Open second round