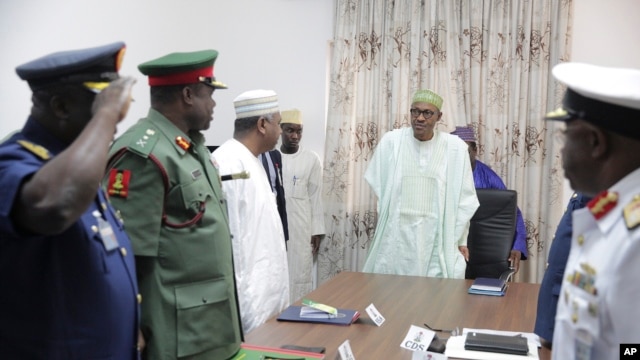 Nigeria’s military said it repelled a Boko Haram attack Saturday in northeastern Borno state but denied the attack had been aimed at its army chief.

Colonel Sani Kukasheka Usman, spokesman for the army, said Boko Haram militants had struck at a military convoy about 45 kilometers or 28 miles east of the state capital of Maiduguri. Chief Lieutenant General Tukur Burtai had been visiting troops to encourage their fight against the terrorists.

ABOVE PHOTO: FILE – Nigerian President Muhammadu Buhari presides at a meeting with his nation’s service chiefs in Abuja, June 2, 2015.

“Unfortunately, between [the villages of] Mafa and Dikwa, the remnants of Boko Haram laid an ambush on the first convoy of the entourage of the chief of army staff,” Usman said.

The army spokesman denied the attack was a direct ambush on Burtai, saying the militants didn’t even know the army chief was in the vicinity.

Usman said the army killed 10 of the terrorists and captured five. He also said one government soldier was killed and five were wounded.

President Muhammadu Buhari has promised to defeat Boko Haram. But some say there has been an increase in Boko Haram attacks since May, when Buhari was sworn in.

Usman said the chief of army staff has always been in the northeast theater of the fight against terrorism and insurgency. He said the media has misinterpreted what happened Saturday.

“It’s no question of embarrassment or anything. The chief of army staff has always been in the field. And it’s not just him; all the services chiefs,” Usman said. Boko Haram militants “were not even aware the chief of army was even part of the convoy.”

Usman said troops “have been making tremendous and steady progress in the fight against terrorism and insurgency in the country, and our troops have been enclosing the enemy to the extent that we want to isolate them in the Sambisa Forest only.”

On Sunday, United Nations Secretary-General Ban Ki-moon began a two-day visit to Nigeria to talk about terrorism and other vital issues with President Muhammadu Buhari.

Ban also will meet with religious and business leaders and human rights activists.

He will lay a wreath to mark the fourth anniversary of a Boko Haram suicide car bombing at the U.N. building in Abuja that killed at least 18 people.

Wanted: Maximum Security for Mr. President As Corruption Fights Back