ABOVE PHOTO: President Muhammadu Buhari receiving delegations from Columbia at state house on 12/10/2015

President Muhammadu Buhari said Wednesday in Abuja that he remained fully confident that by the end of this year, Boko Haram’s ability to attack, seize, ravage and hold any Nigerian territory will have been completely obliterated.

Buhari stated this several hours after four people were killed when three suicide bombers blew themselves up in a suburb of the northeastern Nigerian city of Maiduguri, the army said on Wednesday.

Speaking at an audience with the  Commander of United States Africa Command, Gen David Rodriguez, President Buhari said that with greater support from his administration in terms of improved training, equipment, logistics and welfare, the Nigerian Armed Forces were now well positioned to meet the December deadline which they have been given to end the Boko Haram insurgency.

In a State House Press Release dated 14 October 2015 and signed by Femi Adesina, Special Adviser to the President, (Media & Publicity), the President seized the opportunity of General Rodriquez’s visit to restate his appreciation of the United States’ support for Nigeria’s efforts to overcome terrorism and insurgency.

“We must thank the United States of America for sending training teams and equipment to us. The positive results of our collaboration are evident.

“Structured attacks by the insurgents have reduced and by the end of the year, we should see the final routing of Boko Haram as an organized fighting force, ” the President said.

President Buhari  appealed, however,  for greater cooperation from the United States  in securing  the Gulf of Guinea through which stolen Nigerian crude oil is shipped abroad.

Decrying the severe revenue losses which Nigeria suffers from crude oil theft, President Buhari said that his administration was determined to end this criminal practice and would welcome more support from the international community in this regard.

General  Rodriguez told President Buhari that  he was in the country to strengthen Nigeria/United States  military relations, and also explore further options  for assisting the Multinational Joint Task Force established by Nigeria and her neighbours, to fight Boko Haram. 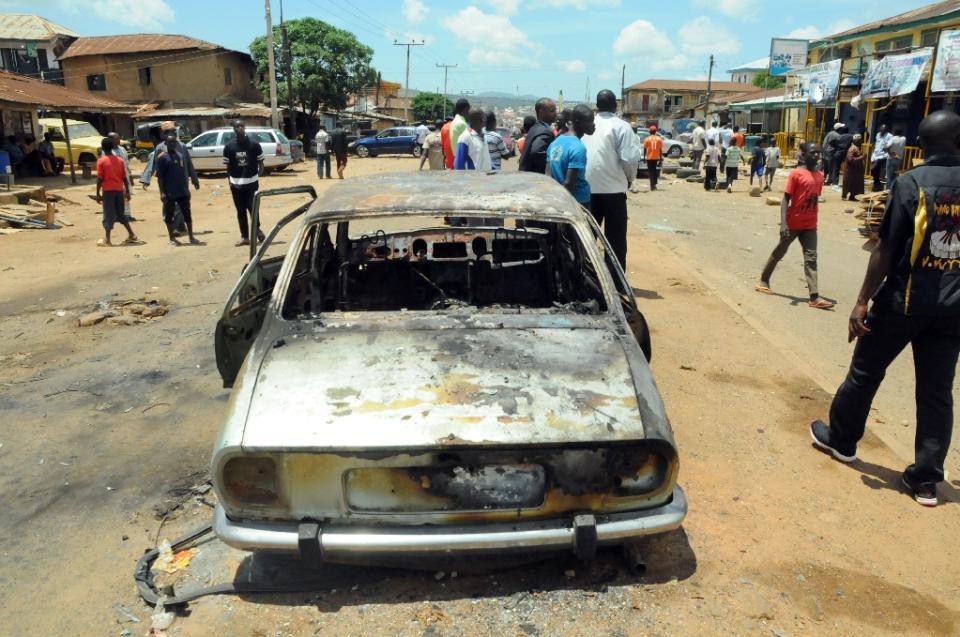 At least 1,320 people have been killed in attacks blamed on Boko Haram militants since President Muhammadu Buhari came to power in May 2015 (AFP Photo/)

The jihadist group Boko Haram has been blamed for a spate of attacks in Maiduguri and the wider northeast, aiming at “soft” civilian targets such as mosques, markets and bus stations.

Yesterday’s blasts happened in quick succession in the Ajilari Cross area of the city from 8:10 pm (1910 GMT) on Tuesday, according to local residents.  Ajilari Cross, located close to Maiduguri Airport and a military base on a main route into the city, has been targeted twice in the last month in similar attacks.

On October 1, at least 10 people were killed when four suicide bombers blew themselves up. On September 20, at least 117 were killed in a wave of bomb attacks. More than 1,320 people have now been killed in Boko Haram violence since Muhammadu Buhari became president on May 29, according to an AFP tally.

The majority of attacks have been in Borno state, of which Maiduguri is the capital, with this month seeing an increase in the frequency of suicide bomb attacks.

Three suicide bombers blew themselves up in two satellite towns near the capital Abuja on October 2, killing 18. The police on Tuesday said they had arrested the two suspected masterminds.

Usman also said that 10 suspected militants were killed on Tuesday when troops laid ambush to rebels who attacked the military and Geidam town in the northeastern state of Yobe last week. “They were ambushed while returning from an attack on Gajiram near Ngollom village,” he said.

Two suspected militants and a soldier were killed while another soldier was wounded on Tuesday morning in clashes at a location in Okene city in central Kogi state, Usman added.