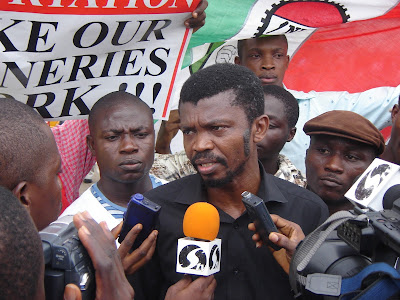 Address of Comrade Ayuba Wabba mni, president, Nigeria Labour Congress [NLC] on the occasion of the commemoration of the 10th anniversary of the death of Comrade Chima Ubani, at Labour House, on December 16, 2015

I wish to welcome you all, Comrades, distinguished ladies and gentlemen to this commemorative symposium we have put together with our Comrades from the Abuja Collective, to mark the 10th anniversary of the tragic death of our Comrade and compatriot, the late Comrade Chima Ubani, in Potiskum along with Vanguard newspaper’s Deputy Photo Editor, Tunde Oyeleru, while returning to Abuja from Maiduguri, after participating in a protest rally the Nigeria Labour Congress organized with our civil society allies against increase in the price of petroleum products.

We are today marking the anniversary of the death of a comrade who, in his short but eventful life, touched the lives of millions of Nigerian people through his fearless and courageous struggles for a just and egalitarian society; a society whose wealth will be managed to provide the greatest joy to the greatest number of its citizens.

In his life time, he was a renowned student activist, pro-democracy campaigner and an ally of Nigerian workers. He was among the generation of students activists that early in their struggle realized the importance of the labour movement and worked actively to consolidate the working alliance which in the early ’80s the Nigeria Labour Congress had formally entered into with the National Association of Nigerian Students (NANS).

As host president (UNN Students’ Union President) to the NANS Secretariat under the late Emma Ezeazu, in 1986, Comrade Chima was part of those who came to the NLC, then led by Comrade Ali Chiroma, to support the students’ struggle following the killing of ABU students in May 1986, which culminated in a nation-wide students protest in the country. NLC’s resolve to do a solidarity action in support of Nigerian students on June 4, 1986 led to an unprecedented clamp down on labour leaders across the country on the eve of that day. It was therefore not surprising that after his delayed graduation from the university, he reunited with his other Comrades at the Civil Liberties Organisation as a staff, to continue their collaboration and liaison with organized labour.

Our Comrade went on to play a central leadership role in the pro-democracy movement, as Secretary General of the Campaign for Democracy (CD) in the hay days of the annulment by the military regime of General Ibrahim Babangida, of the June 12, 1993 Presidential elections, which the late MKO Abiola won. The courageous and determined spirit of our Comrade shone brightly in the street battles for the actualization of the mandate Nigerians gave MKO Abiola in that election. Like one of our guest speakers at today’s event, Comrade Femi Falana, Comrade Chima suffered long detention in the attempt by General Abacha, who had taken over as Military Head of State, to smash the civilian/pro-democracy resistance to the annulment.

When the country returned to civilian democracy, thanks to the persistent and sustained struggles of comrades like Chima, he never gave up on his quest for the realization of a genuine peoples’ centred democratic dispensation for our country. This led to his teaming up with others to ensure that the democracy they fought for, braving bullets and military jack boots on the streets of Lagos and other cities translated into improved livelihood for Nigerians.

It was in furtherance of the actualization of this objective of holding our political leaders to account, that the Congress and its civil society allies came together and formed the Labour-Civil Society Coalition (LASCO), which Chima became a pioneer co-secretary of. It was in furtherance of achieving one of the goals of the Coalition, that he attended the Lagos, Kano and Maiduguri strands of the 8-city National Rallies against former President Obasanjo’s penchant for increasing petroleum products’ prices, and thereby increasing the hardship on Nigerian people. It was in the course of this patriotic national service, as we said earlier, that he lost his life – in active service to the poor, down trodden masses of our people.

Comrades, this occasion should provide us an opportunity for reflection on the state of our country and the state of our democracy. Against the background of the serious national crisis we are currently going through, caused by the mismanagement and recklessness of our political elite since the return of civilian rule in 1999, there is always the temptation to ask whether the struggle for democracy was indeed worth it after all. However, I think that no matter the level of our frustration, we should not allow the question to be posed in this way. In modern times, there is hardly any alternative to democracy. What I think we ought to be questioning is the quality of our democracy, and what we – labour and civil society actors – should be doing to improve the quality of this democracy. We also should rightly be addressing the question of how the working class and its allies can participate in the struggle for capturing political power so that we are able to project the programmes, the visions of the working class in rebuilding our nation.

This should be our preoccupation in the medium and short terms. However in the meantime, we need to rebuild the labour-civil society alliance to continue the fight for good governance from our political elite, and stop them from the self-help and the endless primitive accumulation and looting of our common treasury by politician of all political persuasion.

In this regard, we must renew our determination to enthrone accountability by the political class in our country. We need to ensure that we apply maximum pressure on government so that all the on-going disclosures of massive pillage and crimes against Nigerian people do not go unpunished.

Since we took over the mantle of leadership of Congress after the February/March 2015 Delegates’ Conference, we have used a number of fora to state our resolve to revive and rebuild our ties with civil society. During the colloquium held in honour of the late Comrade Emma Ezeazu here in this auditorium some months back, we recommitted our desire in this regard. At the end of August 2015, when we held a National Leadership Retreat on the programme of our new leadership of Congress, we not only invited representatives of civil society to the Retreat, Comrade Y.Z. Y’au also gave a presentation on the state of labour and civil society collaboration, and there was elaborate discussions on what is to be done.

Also, last month, we met with civil society bodies here in Abuja, and continued the conversation. At the end of these consultations, our hope is that we will have stronger and more virile labour-civil society collaboration.

As I told one of our Comrades while we were working to put this programme together, all the problems of our movement accumulated over the years will not be resolved overnight. We are however committed to giving our best and earnest shot to addressing those we identify as important to strengthening the base of our movement. In this regard, the Nigeria Labour Congress under our leadership will work with like-minded organizations to preserve the heroic memories and the legacies of Comrade Chima Ubani.

To die in action fighting for the freedom, for the cause of others is perhaps one of the noblest deaths ever. Our Comrade Chima died in the course of the struggle of Nigerian people for improved living conditions. He will forever live in our memories. Nigerians and Nigerian workers especially will never forget his heroic sacrifice.

For the Vanguard photo journalist, Mr. Tunde Oyerelu, the Congress will work with his last employer to assemble a collection of his photographs in action and publish it, as well as do a public presentation of it before the next anniversary of their tragic deaths. This is a way of immortalising his life and works, and also to show that Congress appreciated his supreme sacrifice in the course of reporting our activities and struggles.

In the course of trying to hold this memorial, we had to postpone it on two or three occasions to the apparent frustration of our guest speakers. I now believe that providence, and the spirit of Comrade Chima may have conspired to influence the choice of today for this commemoration.

Comrades, I crave your indulgence to use this occasion to comment on a very pertinent issue which you all will agree with me has been central to our struggle in the past two or three decades, and which, as you all know, Comrade Chima had played very critical part in, and that is the issue of withdrawal of subsidy on petroleum products or increase in the price of petrol.

At the Senate, the Minister of State on Petroleum Resources talked about “gradual removal strategy” which he said would begin with the return to the pump price of N97 per litre from the current N87. Mr Kachikwu threatened of the possibility of the Buhari government considering total withdrawal of fuel subsidy. According to him, “the government doesn’t need to fund subsidy. There is energy around the removal of subsidy. Most Nigerians we talked to today would say: “That’s where to go.”

With the figures being disclosed as the amount our political elite have stolen in the name of security, but which are used to “consult” spiritualists, etc, one thought that Nigerians have had enough shock to contend with for a long time. However, listening to Mr Kachikwu talk about the so-called “most Nigerians” that they talked to wanting fuel subsidy to be removed; one can only wonder out loud who these Nigerians that the Kachikwus of this world are talking to. These “Nigerians,” certainly, won’t be the millions of downtrodden mass of Nigerians who weathered every odd, including the threat of violence, to vote out the PDP-led government and embraced on March 28, 2015 the “change” agenda they believed Muhammadu Buhari symbolised.

The Nigeria Labour Congress wishes to state without equivocation that Kachikwu represents the same forces that have misled past governments on the issue of removal of subsidy and deregulation of the downstream operations of the petroleum industry. While the position of Congress on these issues clearly remains unchanged, we make bold to however caution President Buhari to be wary of the likes of Kachikwu whose sweet tongues on the issue of subsidy removal had derailed former presidents from achieving their lofty goals.

Now that the Buhari Government may have, through Mr Ibe Kachikwu, sent the message to Nigerians on the path it wishes to take on the issue of petroleum subsidy, Congress will meet in its relevant organs, hold consultations with civil society and other organisations and professional bodies and carry out the instructions as we will be mandated.

Comrades, distinguished ladies and gentlemen. Once again I welcome you to this commemorative event.

Read and Save: The Universal Declaration of Human Rights

Why we oppose internal investigation into Shiite, Onitsha massacres – Intersociety