Nnamdi Kanu and the Biafra Question(s)

Nnamdi Kanu’s reference to Nigeria as a zoo was exactly the same way a presenter in Rwandan local radio station incited the Hutus to violence with inflammatory messages in 1994. 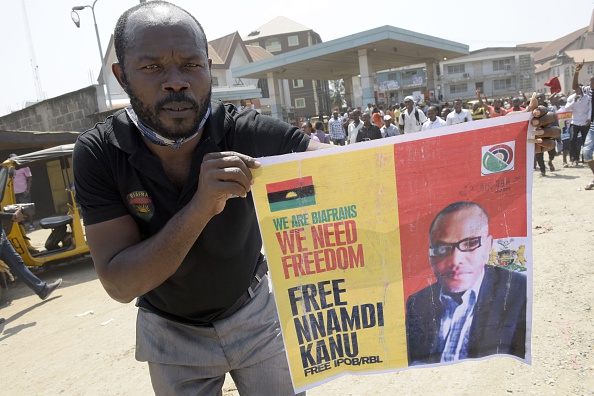 2015, in less than 2 days will become history but not without the lingering issue of Biafra’s secession that resonated this year by those who felt marginalized and alienated in this present government, made headline news across the globe.

Headed by Nnamdi Kanu, the founder, Indigenous People of Biafra, (IPOB) through his seditious and treasonous radio station was broadcasting hate messages against the government of the Federal Republic of Nigeria.

The IPOB leader, now cooling off in detention pending when the rule of law will decide on multiple charges against him bothering on terrorism has emerged as one of the greatest threat to our nation’s territorial integrity.

“…all traitors must die and so too their families. This nonsensical disease of Igbo saboteurs springing up all over the place in the name of having a different opinion on Biafra liberation will no longer be tolerated especially those who claim they are Biafrans but are supporting APC or APC candidates.”

The above quote from Nnamdi Kanu sums it all about an average Biafran supporters’ belief in the movement.

When you share different opinion with crass supporters of Biafra about their unrealistic dream, you automatically become an arch-enemy with a threat that, when the actualization of an Independent Biafra is achieved, you will be among those that will be gathered, tied to the stakes and shot by firing squad because according to their leader, “all traitors from the ‘zoo’ won’t have a place in the land of Biafra”.

The inciting broadcasts from radio Biafra is already making some misguided elements of Igbo extraction display terrifying ignorance; this can be seen through violent protests in some states in the South East.

According to their leader, if losing their lives is the only way Biafra could be achieved, they should get ready not only to suffer persecution in the zoo but to lay down their lives until the republic of Biafran is achieved.

Nnamdi Kanu’s reference to Nigeria as a zoo was exactly the same way a presenter in Rwandan local radio station incited the Hutus to violence with inflammatory messages in 1994.

“All those who are listening, rise so we can fight for our Rwanda. Fight with the weapons you have at your disposal.

“We must finish with them, exterminate and sweep them away from the whole country. There must be no refuge for them.”

And before the world could get their heads around the Rwandan genocide, one of the most brutal acts of murder was committed and in less than 100 days; an estimated 1 million people were slaughtered.

There’s a proverb that says, “A speech is like an egg, once it drops it can’t be withdrawn”.

With the way sympathizers of Biafra are erupting their volcanoes, am afraid in coming months, if nothing is done to correct the damage radio Biafra has done to the psyche of Igbo youths, Nigeria may wake up to another maiming and killings in the South east of those who have different opinions on Biafra’s liberation.

IPOB has already declared other parts of Nigeria enemies of Biafra, and the Biafra question(s) I would love IPOB to answer are: if Biafra becomes a republic tomorrow, how will she cope as an island bordered and surrounded by zoos and what will there be the fate of the majority of the people of the South easterners that has pledged to defend Nigeria’s unity and up hold her honour and glory?

With the threat of another holocaust in Igbo land, for non-supporters of Biafra, are the Indigenous People of the Republic of Biafra (IPOB) actually agitating for a sovereign state or a vindictive republic?