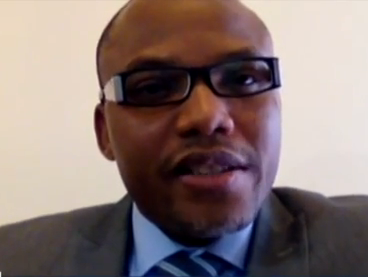 The detained Director of  Radio Biafra has met his bail conditions but is still being detained, his lawyer has stated.

Elombah.com had reported that Nnamdi Kanu who was arrested at Golden Tulip Essential Hotel, Ikeja since last month was granted bail on Monday, 19 October 2015 in the sum of N2 million or with surety of N2 million with a civil servant of grade level 16. But he is still in custody at the time of filing this report.

When contacted over the telephone, Nnamdi’s lawyer, Vincent Obetta said: ”I got a call from Police authorities asking why my client should call people out on the streets for demonstration. This is happening in spite of four court orders I have secured and served to DSS instructing them to release my client who was granted bail since October 19.

The Director of pirate radio, Radio Biafra, Nnamdi Kanu, was on Saturday Monday, 17 October 2015 arrested by Nigeria secret police, the Department of State Services (DSS). The Deputy Director of Radio Biafra, Uche Mefor, alongside other members of the group, in a marathon broadcast on the pirate radio, had stated that Kanu was arrested in Lagos by the security operatives, as he flew into Nigeria from his base in the UK.

“DSS has not given any reason for his continued detention. We have fulfilled his bail conditions. To worsen the matter,he is being detained in DSS facility instead of prison custody with access to his lawyer and personal physician. Nnamdi is being detained by an executive order. Its is a clash between judiciary and executive”, Obetta stated.

“I have not seen or heard any place where a court grants bail and the person is not released. Under UN and Africa charter, it is enshrined that once bail is granted, you release the person upon meeting the bail conditions. We are sliding to days of Decree 2 and 4 of 1984. This is pure dictatorship.”

In his reaction, the Police Public Relations Officer, PPRO, Mr. Ebere Amaraizu, in a text message to Vanguard said that,”MASSOB declared a non-violent protest in Enugu. Security operatives are monitoring closely to ward-off violence and suspected cashes in the protest”.

Meanwhile the separatist group, Move­ment for the Ac­tualization of the Sovereign States of Biafra (MASSOB) has issued a one week ultimatum to the Fed­eral Government to imme­diately release the detained Director of Radio Biafra and Leader of the Indigenous People of Biafra (IPOB), Nnamdi Kanu, or face severe sanctions.

Madu affirmed that the action is sequel to the nationwide protest embarked by the Indigenous People of Biafra (IPOB) since Friday last week demanding for the release of Kanu and pledged full support to the protest by the IPOB, stressing that they would not relent till their agitation is actualized.

there was unusual military presence at strategic locations even as armoured tanks were deployed to the streets ostensibly to forestall possible breakdown of law and order.

In Abia, a cross section of members of the group said that they decided to embark on the protest as a mark of respect for their leader, Kanu who is being detained by the federal government and called attention on the marginalization meted out on the South East and South South zones of Nigeria.

According to them, “we want to use this opportunity to tell the world of the level of marginalization and dehumanization the South East and South-South states have suffered even when they were the goose that lay the eggs other parts of the country are enjoying today.’’

They called on the International bodies to help them realize a sovereign state of Biafra which they have been agitating for.

The group had as early as 7am gathered at a location near the Ariaria International market to take off for the protest, but were dispersed by a combined team of security agents.

Between 11am and 12noon, the group went round some lines in the Ariaria International market with a bell warning that the market would close for business on Monday for a proposed rally.

But according to a member who later spoke to journalists, it was a ploy to deceive agents of security agencies who were acting as spies in the market.

They regrouped around noon at a different location where they later marched along major streets of Aba, including Faulks Road, Aba-Owerri, Ikot Ekpene, among other places, causing gridlock at intervals which made vehicles to move at snail pace on the roads.

While marching along Ikot Ekpene Road, the group made a stopover near the office of the Nigerian Television Authority, NTA Channel 6 Aba, but were not allowed to get close to the gate of the television station by the police.

Spokesman of the Abia State Police Command, DSP Ezekiel Udeviotu Onyeke, could not be reached for comments; a senior police officer at the Aba Area Command told Vanguard that the Police were on ground to maintain law and order.

Motorists and passengers were stranded last night in Obiogbo area of Rivers State as hundreds of pro- Biafra supporters embarked on protest march.

Some motorists and passengers who called Vanguard at about 7.15pm last night said there was no vehicular movement around Timber bus stop area because of the activities of the protesters.

It will be recalled that similar protest held at Okobe community end of the East West Road in Ahoada West local government area of the state on Saturday.

Effort by the Rivers State Police command to ensure the protest did not hold in the state was futile as the protesters beat Police security to embark on the exercise.

There have been heavy Police presence in Port Harcourt, the state capital to nip any protest by the group in the bud.

In a related development a soldier allegedly shot dead a commercial bus driver around Rumuokoro  area of Port Harcourt, yesterday evening, for reportedly driving against traffic.

Details were hazy but the situation caused traffic gridlock in the area as some commercial vehicle operators went on protest.

Eye witnesses said the protesters blocked the road for some hours before calm was restored.

Abia govt will remains neutral unless…

No sensible govt will support such agitation – Umahi

The Ebonyi State Government condemned the agitation. Chief press secretary to the Governor, Mr. Emma Anya, said:  “No sensible Government will support such agitation. The Federal Government is trying its best to keep the country together. Remember that during the last civil war millions of lives were lost and that is not what we need now. What is necessary is the economic prosperity of the nation.”

Anambra State government said last night that it is still studying the activities of the pro-Biafra agitators, who have caused some disquiet in the state in the last few days.

The agitators, mainly those belonging to the group known as the Indigenous People of Biafra, IPOB, brought the commercial city of Onitsha to a standstill, last week, while another group travelled from Agbor in Delta State to Awka where they caused traffic gridlock for several hours on their way to Ebonyi State.

A government official who spoke to Vanguard on condition of anonymity said that Anambra State government was handling the matter with a lot of caution.

He said that since the agitators have been peaceful in their actions, there has not been any need to use force on them.

He however warned that the state government would not watch while they threaten the existing peaceful atmosphere in the state.

While in Awka weekend, the group, chanted pro Biafra songs and demanded the immediate release of the embattled director of Radio Biafra, Mr. Nnamdi Kanu.

They were led by the Lagos State coordinator of IPOB, Mr. Raphael Ikedigwe, who insisted that they would continue with the peaceful protest until Kanu, Benjamin Onwuka and others in detention are released.

According to Ikedigwe, members of the group were divided into two, comprising group A made up of those from Bayelsa, Rivers, Abia, Imo, Akwa-Ibom and Cross river states, while group B comprised of Anambra, Imo, Enugu and Ebonyi.

The group said they were different from Movement for the Actualization of the Sovereign State of Biafra (MASSOB) although they are pursuing the same agenda.