DSS applied for withdrawal and discontinuation of earlier charges against Nnamdi Kanu. The Court dismissed and struck out the charges and ordered for Kanu’s discharge and unconditional release. 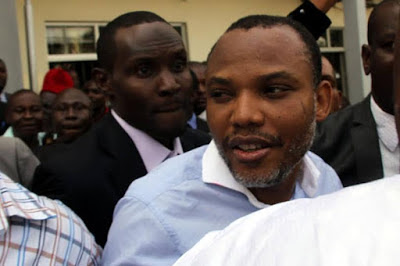 Today: 14th January 2016; marks 90th day since Citizen Nnamdi Kanu was arrested by the DSS in Lagos, Southwest Nigeria and taken into its underground custody in Abuja, North-central Nigeria; and held without trial or conditional (bail) release or unconditional release till date.

The arrest and detention of Citizen Nnamdi Kanu and their circumstances are in grave violation of all known constitutional, regional and international conventional liberties or civil and political rights. Gravest of these violations by President Muhammadu Buhari and his DSS are the provisions of Section 35 (4) (a) (b) of the Constitution of the Federal Republic of Nigeria 1999 as well as Sections 293, 295 and 296 of the Administration of Criminal Justice Act (ACJ) of 2015.

Therefore, we; the International Society for Civil Liberties & the Rule of Law, feel saddened and alarmed over President Muhammadu Buhari administration’s anarchic approaches and dispositions; which are steadily leading Nigeria to irreparable destruction of  its organized society, public morality and decency. The consequences of President Muhammadu Buhari administration’s contempt to rule of law are economically, politically, socially and ethno-religiously calamitously.

Economically speaking, for instance, no rational foreign investor will risk his or her investment or capital in a country where its president boldly appeared on a national television and declared disobedience to judicial decisions and disrespect to rule of law as sacrosanct and the corner stone of his administration.

Clear  Violation of  Letters of the Constitution: Citizen Nnamdi Kanu’s detention of over 60 days without trial or bail release is prohibited by Section 35 (4) (a) of the 1999 Constitution which clearly stated that “any person who is arrested or detained in accordance with subsection 1 (c) of this section(reasonable suspicion of committing any criminal offense or preventing commission of a criminal offense)shall be brought before a court of law within a reasonable time, and if he is not tried within a period of: (a) two months from the date of his arrest or detention in the case of a person who is custody or is not entitled to bail (in capital offenses), he shall (without prejudice to any further proceedings that may be brought against him) be released either unconditionally or upon such conditions as are reasonably necessary to ensure that he appears for trial at a later date”.

Citizen Nnamdi Kanu’s arrest and detention without trial is also prohibited by subsection 4 (b) of Section 35 of the 1999 Constitution, which also clearly stated that “if a citizen is arrested and detained, but released on bail without being tried within three months or 90 days, he or she shall either be released unconditionally (discharged by a court of law) or be put under such conditions reasonably necessary to ensure his or her fair trial with full enjoyment of his or her judicial liberties.

And (c) if a citizen is arrested and detained but released on bail; he or she must be charged to court within three months or be judicially charged. Further meaning attached to the foregoing is that those citizens arrested and detained by the EFCC over white collar crimes like fraud, embezzlement, money laundering, diversion of public funds, etc; must not be detained beyond 24/48hrs without trial. Prosecution of such offenses substantially requires pretrial paper or documentary evidence. Such offenses are also classified by Nigeria’s law as misdemeanors; with judicial conviction and sentencing not exceeding three years for each charge.

Clear Violation of Letters of the Law (ACJ Act 2015): Citizen Nnamdi Kanu’s 90 days detention without trial or release is also prohibited by the provisions of Sections 293, 295 and 296 of the Administration of Criminal Justice Act (ACJ) of 2015.  By the combine provisions of the Sections under reference, no authority or person in Nigeria including President Muhammadu Buhari and his DSS is allowed to arrest and detain any suspect-citizen, no matter the gravity of his or her alleged offense; for more than 24/48hrs, except through court remand granted by a magistrate court (in cases of capital offenses) or high court. Specifically, no court remand is required to detain citizens such as EFCC detainees (alleged white collar crime offenders) and other citizens accused of committing misdemeanor or simple offenses in Nigeria.

Magistrate Court remands are provided in the ACJ Act 2015 so as to grant detaining authorities maximum of 28  (and final and extra 14 days, as case may be) investigative and pretrial detention days to prepare and tidy up the files to charge their alleged capital punishment offenders to the court of competent jurisdiction.  This is aimed at putting to an end to endless criminal investigations as well as addressing the scourge of awaiting trial inmates in Nigeria’s congested and inhuman prisons. To enforce this, Section 34 of the ACJ Act 2015 empowers the State and FCT Chief Judges to visit their prisons every month and investigate the conditions of awaiting trial inmates and ensure full compliance with the provisions of the ACJ Act 2015.

In the case of 90 days of criminal and unconstitutional detention of  Citizen Nnamdi Kanu, by Section 293 (1) of the ACJ Act 2015, “a suspect arrested for an offense which a magistrate has no jurisdiction to try (usually capital offenses), shall, within a reasonable time of arrest (24/48hrs: see Section 35 (5) (a) of the 1999 Constitution)), be brought before a magistrate court for remand” and by Section 293 (2) “an application for remand under  this Section shall be ex parte and shall: (a) be made in the in the prescribed  “Report and Request for Remand Form”, as contained in Form 8, in the First Schedule to this Act, and (b) be verified on oath and contain reasons for the remand request”.

By Section 295 of the Act, “the Court may, in considering an application for remand, brought under Section 293 of this Act, grant bail to the suspect brought before it, taking into consideration the provisions of Sections 158 to 188 of this Act relating to bail “ By Section 296 (1), “where an order for remand of the suspect is made pursuant to Section 293 of this Act, the order shall be for period not exceeding 14 days in the first instance, and the case shall be returnable within the same period”.

By Section 296 (2), “ where, on application in writing, good cause is shown why there should be an extension of remand period, the court may make an order for further remand of the suspect for a period not exceeding 14 days and make the proceedings returnable within the same period; (3) where the suspect is still in custody on remand at the expiration of the period provided for under subsection (1) or (2) of this Section, the Court may, on the application of the suspect, grant him bail in accordance with the provisions of Sections 158 to 188 of this Act”.

Further, by Section 296 (4) of the same ACJ Act 2015, “if at the expiration of remand order made pursuant to subsection (1) or (2) of this Section, and where the suspect is still remanded with his trial having not commenced, or charge having not been filed at the relevant court having jurisdiction, the Court shall issue a hearing notice on: (a) the Inspector General of the Police or the Attorney General of the Federation (AGF), (b) the Commissioner of Police of a State or the Federal Capital Territory, or the AGF, as case may be, or (c) any relevant authority in whose custody the suspect is or at whose instance the suspect is remanded, and adjourn the matter within a period not exceeding 14 days of the expiration of the period of remand order made under subsection (1) or (2) of this Section, to inquire as to the position of the case and for the IGP or the State CP and the AGF to show cause why the suspect remanded should not be unconditionally released”.

Facts of 90 Days non trial & non release of Citizen Nnamdi Kanu: Citizen Nnamdi Kanu was arrested on 14th October 2015 by DSS under non-disclosure of offense(s) warranting his arrest, contrary to Section 36 of the 1999 Constitution; detained unconstitutionally for five days before being charged to the Wuse Zone 2 Magistrate Court on 19th October 2015 on a number of alleged misdemeanor offenses. He was granted bail same day and he met all his bail conditions on 22nd October 2015, but the DSS flouted the bail release order and kept him detained till date.

On 18th November 2015, the DSS having fragrantly and rapaciously disobeyed three consequential orders issued by the Wuse Zone 2 Magistrate Court; appeared before the same Magistrate Court with a backdated 90 days detention order misleadingly and fraudulently obtained from the Abuja Division of the Federal High Court; claiming it had stumbled into some facts linking Citizen Kanu with terrorism and terrorism financing; warranting his further detention for 90 investigative days.

The DSS applied for withdrawal and discontinuation of earlier misdemeanor charges against Citizen Nnamdi Kanu. The Wuse Zone 2 Magistrate Court later dismissed and struck out the charges and ordered for Citizen Kanu’s discharge and unconditional release. The order was again disobeyed by DSS. On 17th December 2015, the Abuja Division of the Federal High Court quashed the fraudulently and misleadingly obtained “90 days detention order” and ordered for Citizen Kanu’s immediate unconditional release.

The DSS again flouted the order and told Citizen Kanu’s relatives and lawyers that “orders from above (President Muhammadu Buhari)” directed it not to comply with the superior court order. Citizen Nnamdi Kanu remained solitarily detained and was never released not even for a minute. Instead, his lawyers and relatives were chased out by the DSS from its headquarters in the late night of Friday, 18th of December, 2015 and told that “Citizen and ors are treasonable felons; haven haboured intention to.”

Attempts to arraign him and ors before the Federal High Court in Abuja on 23rd December 2015 failed on account of his refusal to take plea citing rapacious flouting of previous court pronouncements by the DSS and President Muhammadu Buhari; leading to the Presiding Judge washing his hands off the matter. The DSS continued its lawlessness by taking Citizen Nnamdi Kanu and ors back to its custody till date without any judicial custodial detention order, contrary to Section 293 of the ACJ Act 2015. On 30th December 2015, President Muhammadu Buhari confirmed to the world during his maiden Presidential Media Chat of his sole responsibility of detention of Citizen Nnamdi Kanu in total disobedience to rule of law and judicial pronouncements.

Weeks after, the Presidential Committee on Corruption through its chairman, Professor Itse Sagay and the AGF, Mallam Abubakar Malami, SAN, confirmed that they were the advisory architects of Presidential reckless and rapacious disobedience to judicial pronouncements and disrespect to rule of law in Nigeria; saying disobedience to court decisions and disrespect to rule of law are in protection of national interest.

The foregoing has clearly shown how the letters of the Constitution and the Law (ACJ Act 2015) were observed in grave breach by President Muhammadu Buhari and his DSS with respect to 90 days detention (today) without trial or release of Citizen Nnamdi Kanu. In all,  liberties are in chains in Nigeria under the Presidency of Muhammadu Buhari.

Board Chairman, International Society for Civil Liberties & the Rule of Law

Buhari, leave this media battle of fighting corruption and save Naira