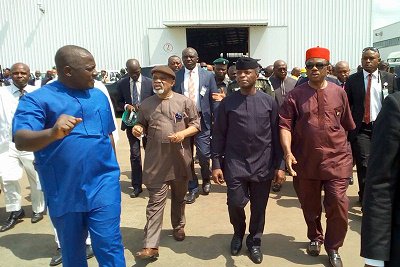 Vice President, Prof Yemi Osinbajo has described Nnewi, the industrial hub of Anambra state as the focal industrial hope of the country.

He stated this during a tour of manufacturing companies and factories within the sectoral cluster in Nnewi, this afternoon.

At the Innoson Motor Manufacturing factory, the Vice President said the Federal Executive Council had approved the purchase of specialized vehicles for the Federal Road Safety Commission from the Nnewi-based vehicle manufacturing company.

He expressed delight at the volume of productivity in Nnewi which he noted was the industrial heartland and hope of Nigeria.

Hear him, “I have heard and seen many of the Innoson Motors in Abuja as well as many other goods produced in companies like Chikason, Tummy Tummy and other business concerns in Nnewi.

“I have been to Onitsha before coming to Nnewi and I must state that I am overwhelmed by the level of ingenuity, creativity and productivity of the manufacturers here.

“The vehicles produced in IVM are top quality and I have equally seen the large number of young men and women employed by these concerns.

“The Federal Government will encourage them so that they will continue to employ our people”, the VP noted.

More so, he said that this great investment by the Chief Executive Officer if the motor manufacturing company, Dr Innocent Chukwuma, in area of manufacturing and production, was a practical means of  creating jobs and reducing unemployment in the country.

He therefore assured that the Federal Government will look into the challenges they face to see how it would assist the company.

While conducting the delegation round the facility, Dr Chukwuma thanked the Vice President and the Governor for the visit, and expressed hopes that their coming would yield positive dividends to the company.

After touring the industrial estate of the Chicason Group, Prof Osinbajo described the Chairman/CEO, Dr Chika Okafor as one of leading industrialists in Africa.

He assured that the Federal Government would address the issue of power and forex to mitigate the harsh and difficult economic weather the industrialists pass through presently.

He pointed out that the Federal Government was passionate in supporting local manufacturers to excel and has therefore adopted a policy of buying locally manufactured goods as a measure to encourage them.

“I’m inspired, I’m impressed with what is happening here at Chicason group, especially the number of people employed by his companies, and President, Muhammadu Buhari is more inspired”, Osinbajo stated

He said he came to Anambra state on a working tour to ascertain for himself firsthand the challenges confronting the manufacturers and industrialists in the state and to see how the Federal Government could assist.

In his remarks, a visibly elated Gov Willie Obiano described the Vice President as a man of his words who promised to visit when he earlier discussed the problems of Anambra manufacturers with him at Abuja and has now come to fulfill the promised.

“Today the Vice President is here with us and I assure you that the problems you would raise here today, he would address them.

He disclosed that the Anambra State Government in response to encourage and patronize made in Nigeria products, recently purchased additional Innoson Specially made vehicles for the State Command of the Nigerian Police Force.

The governor said he attracted the delegation to the state to enable them have firsthand information on the challenges that industries in the State face, with a view to eliciting the Federal Government’s intervention in key areas especially Power, Foreign Exchange and access to capital.

He expressed high hopes that fallouts from the tour would give audacity to the measures his administration is taken in attracting investors to the State.