Now That Atiku Has Re- Joined PDP – By Jideofor Adibe 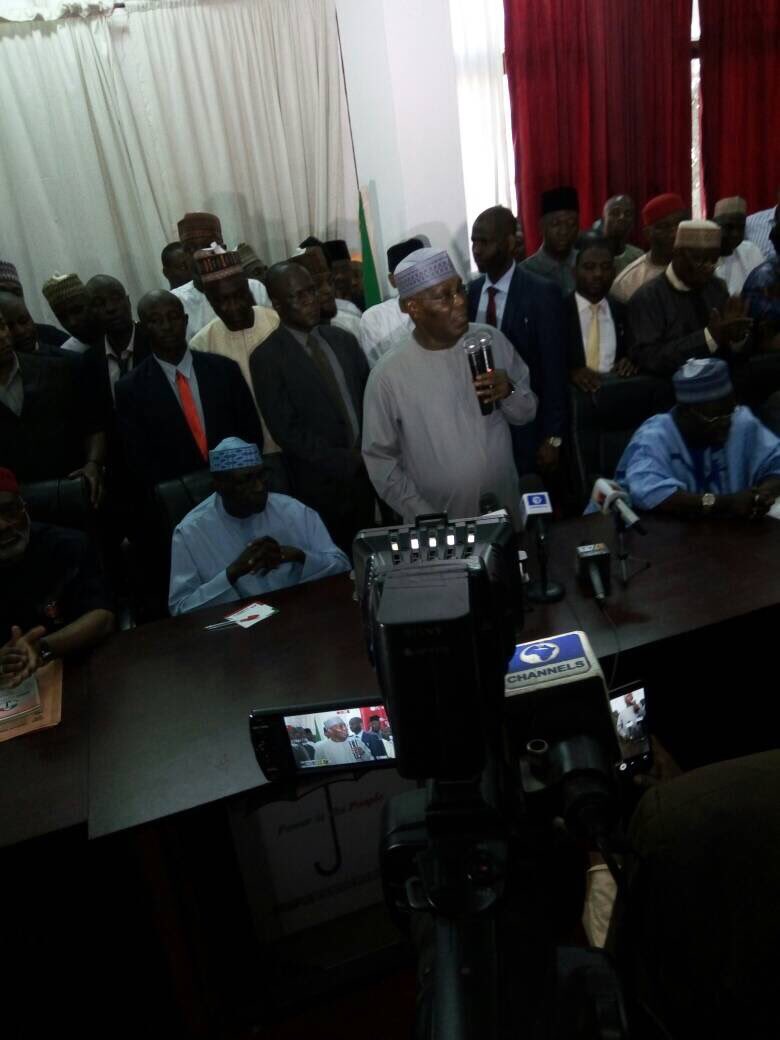 On Sunday December 4 2017, Atiku finally announced that he was re-joining the PDP. The Waziri Adamawa was one of the founders of the PDP, but also helped to bring the party down to its knees, when he led a walkout at the PDP Convention. That walkout was to trigger a chain of events that culminated in the defeat of the party in the 2015 presidential election. But politicians will tell you that there are no permanent friends or enemies in politics, only permanent interests. So whatever sins Atiku might have committed against the party have been forgiven. For Atiku, the issues that led to his walking out on the party have also been resolved. All is well that ends well!

So what should we expect now that the speculations are over, and Atiku has finally re-joined the PDP?

One, Atiku’s decampment has created a new excitement around the PDP. But that excitement is still muted as the outcome of the party’s convention to elect its national Chairman this weekend will largely determine whether the party will be effectively rebranded as a viable alternative to the ruling APC or not.  Atiku’s decampment may not trigger a ‘moving train narrative’ in the short term, even from people who may otherwise want to move. The reason is simple: Buhari generates the fear factor perhaps more than any other Nigerian leader. This fear factor will ensure that politically exposed persons who may want to move, will have to factor in the fact that the Buhari is not Jonathan, and that there may be immediate consequences for any embarrassment. However if the PDP convention goes on well, and its brand value continues to be enhanced, including with a few more strong willed politicians joining its fold, the threshold at which the fear factor around Buhari will be broken will be reached quickly.

Atiku may in fact have started the process of breaking that fear factor around Buhari.  It is debatable whether there is another presidential candidate from the North who will have Atiku’s boldness in calling out Buhari and the APC. In fact the suspected fear among such potential presidential aspirants – both in the APC and the PDP – might have emboldened Fayose to declare his interest in running – when his party the PDP had zoned the post to the North.   It a testimony to his courage that Atiku decamped and called out both Buhari and the APC despite the challenge his company Intels is having with the government. Several other candidates would have been browbeaten into line by the move on Intels.

Two, one of the expectations from the decampment is a flurry of attacks on Atiku (to make it seem like a good riddance to bad rubbish) and a vigorous defence of him by his loyalists and media team. Sometimes this is a deliberate strategy by politicians who have been in the game for too long.  By decamping and calling out on the APC (rather than departing quietly), Atiku may be luring them to bring out all the arsenals and allegations against him – founded and unfounded- into the public domain so they will be vigorously interrogated and countenanced. In this offensive-defensive strategy, victory for Atiku and his loyalists will be measured by whether the generality of the citizens will regard those allegations as stale news or not weighty enough by the time of PDP’s primaries.  For the Buhari team, victory is measured if they succeed in making it stick with the public that Atiku is a ‘damaged good’.

Three, the fear factor, which Buhari generates, and which may stem in the short term massive decampments from the APC, gives Buhari and his party an elbow room to make adjustments to prevent Atiku’s departure from triggering a bandwagon effect. But this opportunity, if seized by both Buhari and the APC, will have a price tag: a big part of Buhari’s appeal to his supporters is that he is not seen as  a ‘traditional’ politician who revels in the ‘little lies people call diplomacy’. His supporters say the Daura General ‘says it as he sees or feels it’. Based on this, if Buhari goes on a charm offensive to woo   party members and others  disaffected by his government,  he will be seen as acting in the mould of traditional politicians – a big detraction from his unique marketing point. It will also remain an open question whether those he wants to woo with such charm offensives will genuinely trust him or merely pretend to do so while biding their time to exert their revenge.

Four, a very important thing to note in the current buzz around Atiku’s decampment is that it is too early to know how it will affect the fortunes of the PDP, the APC and Atiku himself. We are still in the first minute of a 90-minute game. There is still almost a year to the PDP’s presidential primaries. The buzz will eventually settle. A month is like a life time in politics, not to talk of a year. There are just too many intervening variables in life that no one knows how they will play out. None of us for instance knows whether we can live to see the outcome of the PDP primaries, whether there will be illnesses and some rushed to hospitals or even die and whether there will be new forces who will emerge to change the entire political landscape. Therefore the current bounce from Atiku’s decampment can be likened to the Transformation Ambassadors of Nigeria (TAN) which once dominated the political landscape and made it seem that Jonathan had already secured a second term – until the APC elected Buhari as its party bearer without the party fracturing as feared, and the real power works began. The unknowable intervening variables can work in favour or disfavour of Atiku, the APC or the PDP.

Five, one of the things that may work in Buhari’s favour is the unwritten convention that the presidency should rotate between the North and the South for a period of eight years each. Some politicians from the south may calculate that if Buhari is allowed to complete another four years, power would return to the south earlier than under a PDP government, which will take another eight years for power to shift to the south. A PDP presidential candidate may of course promise to do just a single term of four years and hope that the voters will trust him to keep his word.

Six, who will win between Buhari and Atiku in a hypothetical match-up? Largely because contexts and circumstances influence the outcome of elections, the outcome of any contest between the two in the past – whether direct or by proxy- will be irrelevant in judging such a hypothetical contest.  It will be akin to arguing that because team A beat team B three consecutive times in the past, team A is then sure of a repeat performance in a fourth encounter.

If the indices used in determining the outcome of such a hypothetical election are communication skills, preparedness for the job, cosmopolitanism, possession of vast networks across the country and   ability to grow the economy, I think it will be a no-contest as Atiku will clearly win on all the counts.

But democracy anywhere in the world is not driven by logical principles and precepts. It is one of the reasons some call it ‘mobo-cracy’ or ‘mob rule’ because elections only guarantee that the most popular, not the best candidate should win. And the factors that determine a candidate’s popularity are largely driven by emotions and non-logical impulses. Therefore in such a hypothetical contest, issues like ability to ‘perform’ and deliver will be subjective, and therefore almost irrelevant in determining its outcome. Supporters will find a thousand reasons why Buhari has performed creditably while his critics will also find 1000 reasons why he has performed woefully. The emotional reasons that will decide the elections are likely to be wrapped around the following questions: Does Buhari still command the sort of following he had in the North-east and North-west which ensured that he consistently got some 12 million votes in his three unsuccessful runs for the presidency? Atiku’s embrace of ‘restructuring’ may have endeared him to restructuring activists in the South. But will the number of votes from the South on account of that compensate for any loss of votes by people from the North who may regard his embrace of restructuring (opposed largely by the North) as either opportunistic or a sell-out? Atiku has not been a darling of the Northern ‘talakawas’ – at least not in the same way that Buhari has been. Will circumstances create a coalition that will help him override that deficit in the North – just as circumstances created a coalition for Buhar that helped to overcome some of his negative perceptions in the South? Will fate decree that this is Atiku’s time or that the presidency is not meant for him?