Obasanjo: One Meddling Too Many – By Philip Agbese 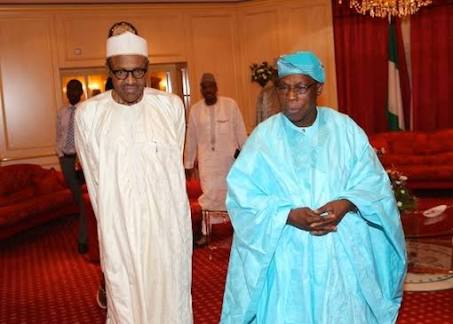 There is only one instance when the messenger can be shot and trash the message trashed – consigned to the dustbin of history, which is when the former president of Nigeria, Olusegun Obasanjo is the messenger. For a man who is addicted to being the centre of attraction, even when it entails being odiously notorious, the former president must be ululating in his private space given the applause his recent statement got from an embittered vocal minority and those who considers him as a sort of deity, whose every pronouncement carries the force of life.

Sadly, the reality is that Obasanjo’s statement, letter or whatever other forms he chooses to meddle in national affairs usually amount to huffing and puffing, a childish attempt to massage his own ego and akin to high fiving himself. If memory serves us well we would realize that the only time that the author of ‘This Animal Called Man’ has not written or meddle to irk a serving leader was the short term of Abdulsalam Abubakar as Head of State and that was possibly because he was still reeling from incarceration for his indiscretion of attempting to subtly unseat a then dictator.

Before his most recent work, he had written to the then President Goodluck Jonathan, whom he accused of driving the country to the precipice and allowing corruption to reign supreme. This letter was written at a time when Obasanjo was still a card-carrying member of the People’s Democratic Party, PDP and he was yet to shred his card at the time. He defended his choice of letter with the excuse that he was denied access to Jonathan. That letter savaged Jonathan to no end even though he was merely continuing the legacy of misrule first set in motion by Obasanjo. It was later credited as being a factor in Jonathan’s failure in his re-election bid.

This attribution must have inflated Obasanjo’s ego to a point where he sees himself as the oracle that would decide the direction for the 2019 General Election hence his decision to issue the 13-page statement that have further confirmed him as a certified patient of messiah complex – he believes Nigeria will crumble and collapse without his intervention even at a point in his life when he should be coming to terms with his mortality. His sick attempt at securing himself a third term in office should have thought him that there is a limit to his overbearing disposition and that Nigerians must chose for themselves the leadership they desire without perpetrating an Obasanjo dictatorship in any guise.

The selfishness that propels Obasanjo as a political animal is best understood by his decision to issue a public statement when a face-to-face meeting with President Buhari would have yielded better results with lesser drama and without distractions. But that would not jell with the Obasanjo way. He went public with his half-thought ideas even when he cannot – like in the Jonathan scenario – prove that he starved of audience with President Buhari.

He did with the knowledge that the many arm chair critics in the country will cheer him without a deep analysis of the issues raised so the one-eyed king leads on his posse of the blind, chanting for the country to be destroyed because they can neither see the new Nigeria rising from the ashes of their destruction and they do not even know the point at which they took the wrong turning at the fork.

Where is the pulpit of Nigerian church for revolution? ~ by Bayo…

Andy Uba and epidemic of fakery in Nigeria ~ by Farooq Kperogi

Imo: Government appointees and the Iberiberism of grab all…

Take farmers-herders’ crisis for an instance, Obasanjo is suggesting complacency in dealing with the matter whereas the issue is more complex than that. And by the way, we have Obasanjo to thank in part for the menace of herdsmen because it was he that accelerated the regional integration intended for the Economic Community of Western African States (ECOWAS) without first ensuring that Nigeria is on the right footing for relating with her neighbors on that scale. Obasanjo and his cheerleaders have never admitted that ECOWAS Transhumance Protocols makes it near impossible for Nigeria to keep violent herders from Futa-Jalon and other places out of Nigeria since that would be in violation.

The trade integration he helped accelerated similarly played roles in helping countries fold up in Nigeria and relocate to other ECOWAS member states from where they haul their products into Nigeria. This has killed our industries. Add to that the fact that Obasanjo never took diversification of the economy serious so over a decade after he left office the current administration is working on diversifying, which has been disruptive as would be expected. Not to be left out are the leftover of the ‘brood of vipers’ that were Obasanjo’s party men, who till date have committed themselves to sabotaging the economy so long as they are not allowed to pilfer from the public till or allowed to enjoy scandalous waivers. And the ‘Ebora Owu’ is talking about someone not having a grasp on the economy.

Meddling might have worked for Obasanjo in the past but to the extent that he has refused to appreciate when to say enough, “Ó má tó tẹ́” (he would soon be ridiculed). The 2019 General Elections will come and go and the people’s position will ridicule Obasanjo and confirm him a mere mortal whose serial fallibility would prove to be no oracle but a diminishing old man afraid to face his final days alone.

Chief Agbese contributed this piece from the UK

Where is the pulpit of Nigerian church for revolution? ~ by Bayo Oluwasanmi

Andy Uba and epidemic of fakery in Nigeria ~ by Farooq Kperogi

Imo: Government appointees and the Iberiberism of grab all mentality — By Kenneth…