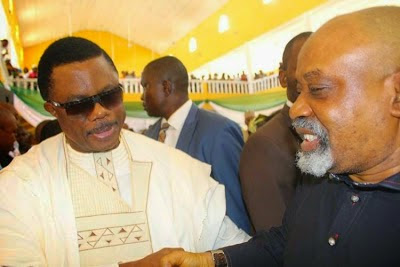 Gov Willie Obiano of Anambra state has reacted sharply to the reported recent comments credited to the Minister of Labour and Employment, Dr. Chris Ngige.

Ngige had said that he (Obiano) will not secure reelection due to his poor performance .

He described Ngige as “a confused politician and attention seeker” who only wants to distract him from the good work he is doing.

Ngige, also a former governor in the state had said that his achievement in three years supersedes APGA’s eleven years in office.

He also vowed that Obiano won’t return to the exalted seat come next year.

The former governor had described Obiano’s administration as a failure but Nwabunwanne disagreed with Ngige.

He insisted that Obiano remains the best and outstanding even with only two years gone.

Nwabunwanne noted that Ngige’s All Progressives Congress (APC) should first of all fix the nation’s economy it incompetently led into recession and has caused untold hard­ship and hunger to the citizens instead of look­ing for any state governor to criticize.

Group to engage 2.7million youths to fight kidnapping, terrorism in…

According to him, “If Ngige is a super leader, he should endeavour to address the lingering Labour problems in the country which even degenerated to the killing of civil servants in Kogi, Nasarawa and other states.

“My party has replied him; what he needs is attention because I am yet to see any political party that has been able to do what APGA government has done in Anambra State.

“Ngige should listen to Senator Ben Bruce who is not even from Anambra or an APGA loyalist but urged Federal Government to borrow a leaf from Anambra state in terms of Security and infrastructure and prompt payment of workers’ salaries.

“Anambra is today an investment destination and safest state in Nigeria, courtesy of His Excellency, the Governor of Anambra state, Chief Willie Obiano.

“So, I don’t actually know what the Labour Minister meant by poor performance in office.

“If you compare the two years that Obiano has been in office and Ngige’s three years, you will see that the difference is clear.

“So, we challenge Ngige to a public debate.

“People like Ngige should be thankful to Gov. Obiano for extending dividend of democracy to Idemili area where he comes from.

Obiano is constructing roads and Bridges, controlling erosion and renovating schools and hospitals in Idemili which Ngige never did for the people of Anambra North when he was governor,” he noted.

Kerry: We’ll sell attack aircraft to Nigeria, if you can afford it