*Peter Obi left over N75b in cash/ Investments; the records are there – Aide*

Reacting to the press conference called by the Secretary to Anambra State Government saying that GOV. Willie Obiano inherited only 9 Billion Cash and 25 Billion Naira near cash, an aide to the former Governor Peter Obi, Mr. Valentine Obienyem described it as untrue and deliberate attempt to misrepresent facts.

In a statement made available to the Press, Obienyem said that Mr. Obi would ordinarily not wish to be drawn into unnecessary controversy but that he (Obienyem) had the responsibility to set the records straight.

He described as interesting the improvement from telling Anambra people that Obi left no money by the Anambra Government to the half true that they only met 9 Billion cash and what they nebulously described as 25 Billion Naira near cash.

Obienyem said that even on that score alone, especially against the background of debts by other States, even after borrowing and raising of bonds, that Obi needed to be congratulated.

Even in the final handover document, Obi deducted 10 Billion Naira approved Federal Government Refund, as well as the salary, pension, gratuity, money on certificates raised on contracts for the month of March which all amounted to 5 billion Naira before arriving at the balance of over 75 Billion he bequeathed his successor. 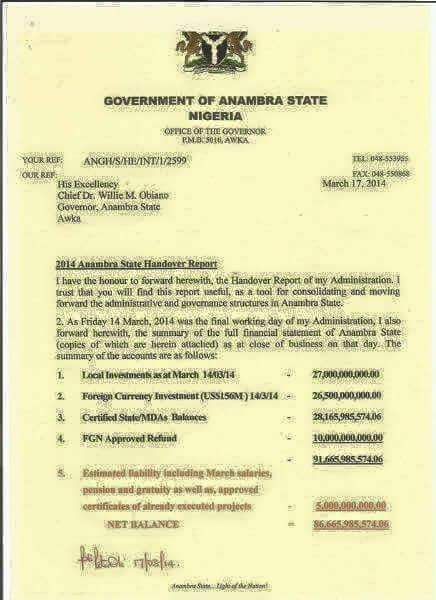 As a financial expert, Obi went to his end of tenure event with Gov. Willie Obiano and said all this in the presence of all the Bank MDS in whose banks the monies are.

In fact, as at March 17th he handed over, he got all the certified statements of Anambra’s accounts from the banks these monies were and handed them over to his successor.

If they were confused on where the monies were, why would they not call Obi who kept them to explain the whereabouts to them as much as he knew?” Obienyem submitted.

On the diminished value of the foreign currency investment, Obienyem said it was a clear lie. Obienyem challenged them to make the calculation public for financial experts to debunk or better still set up a Committee to do proper analyses.

His words: “They should know that the dollar investment is to be held till maturity. It is not to be sold and I hope somebody is not salivating to sell them. As at Friday, the money, originally $156m is now $ 176m dollars. This means it has gained $20m dollars (over 8 billion Naira). This is not guess work but financial exactitude any expert can figure out”, Obienyem said.

On the liabilities Obi left, Obienyem described it as another misrepresentation of fact. He said that not only that the figures they gave were incorrect, Obienyem said that Obi paid contractors being owned by his predecessors and did not owe a single contractor before leaving office.

Are they saying he should pay for contracts awarded but not yet executed before he left office? Did his successor not ran his campaign on the premise of continuity before the people voted him?”, Obienyem asked, while insisting that Obi took over one year to complete projects started by Dr. Chris Ngige before starting his massively.

Obienyem, who said he was not in the business of commenting on what was paid or not on projects started by Obi, thanked God that they did not deny the fact that before leaving office, Obi paid billions for Agulu Lake Hotel, Onitsha Hotel, Awka and Nnewi shopping malls, invested in SABMiller (value of that investment has tripled), among others.

Regarding the Independent power project, Obienyem said he thought it was abandoned because the Government promised to build three with the impression that they are ongoing.

Concluding, Obienyem described as curious, “the denial coming at a time the State Government had concluded arrangement to massively borrow money from banks and financial institutions.”

He opined that they did not need to paint Obi black to do so, especially when the man, since leaving office, has not for a day commented on what is happening in Anambra, even with the daily drench of blame coming his way as being responsible for whatever, right or wrong, that are happening in the State for making his successor Governor, single handed.

Below are the documents Governor Obiano is peddling to confuse the Anambra House of Assembly, so he can have unlimited borrowing powers.

Nnamdi Kanu’s lawyer opens up on his illegal continued detention