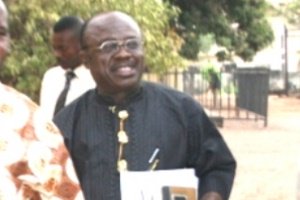 A onetime speaker of the Anambra state House of Assembly, Dr Kanayo Enemuo is dead.

Enemuo had become enmeshed in deep controversy when it was reported that he was ‘elected’ Speaker of the state Assembly in the wee hours of the morning around 3am.

The election was executed by unclear number of members, in the wake of the House face-off with the executive arm in the early life of that era, 1999-2003.

He was indeed the choice of Gov Chinwoke Mbadinuju who was bickering with the legislature over the choice of its principal officers, particularly the post of Speaker.

A lawyer by profession, Enemuo was elected into the state Assembly from a popular vote of citizens from his Ogbaru Two state Constituency.

As part of peace and reconciliation process, which was brokered by the then Speaker of House of Representatives, Alh Salisu Buhari, Enemuo was dropped but given soft landing as the state’s Commissioner for Lands.

He had remained a kitchen cabinet member of Gov Mbadinuju’s government till it exited with the loss of a reelection bid in 2003.

Controversy had almost marred his days at the Lands Ministry as acquisition of land and Certificate of Occupancy(C of O) had allegedly remained undefined, a record that insiders say marked the beginning of the problems that exists in the processing of lands documents in the state till date.

Dr Enemuo is a native of Nibo, Awka South council of the state. He died on Monday.

Though his demise has remained unannounced , the family according to our close source have started making arrangements towards formal announcement and burial plans.

Unconfirmed family sources said he had spinal cord related ailment in addition to some personal emotional challenges that escalated lately due to family.

The Esoterism Of Prez Buhari’s Administration – By Paul John