Oil Resources Revenue: Why Nigeria Must Be Restructured Now! [5]

Recently, some concerned Nigerians have pointed out the Internally Generated Revenue [IGR] as unfavourable to some geo-political zones, especially the South-East which has been on the front burner of restructuring.

According to that school of thought, the South-East cannot sustain itself with its current IGR which is 49.93 billion Naira and second to the last on the log, just above North-East.

They are quick to point to a recent table obtained from the ministry of finance which shows four regions ahead of the South-East below:

Table of 2016, 2015 Internally Generated Revenue (IGR) and 2015 Net FAAC Allocations  in Nigeria by Geopolitical Zone and By State 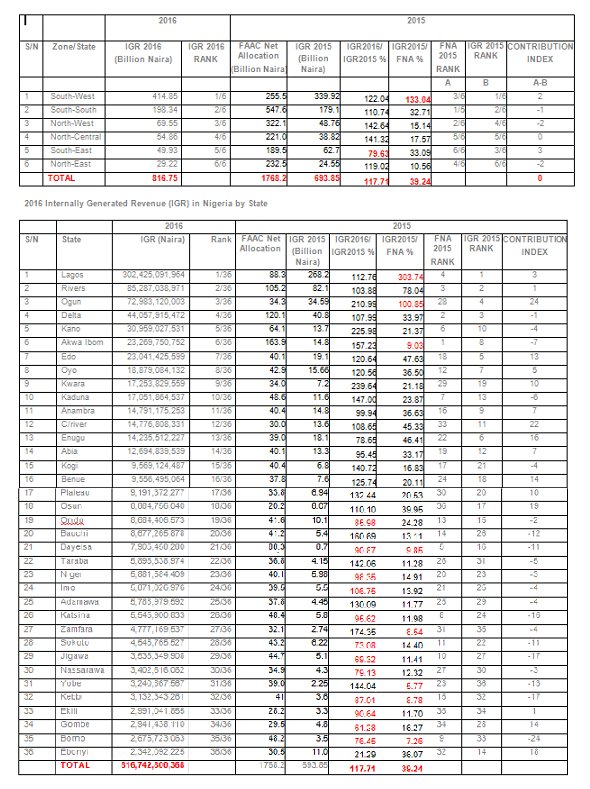 However, breaking down the arguments for and against, one of our analysts showed that the data was highly skewed.

According to him, states and the Federal government does not share internally generated revenue, therefore, should not constitute a national debate.

He, however, was quick to point out that “in most of the states that you showed their internally generated revenue, Igbo businessmen and women contribute between 30 to 70%.”

He maintained that “It is to the advantage of all for Nigeria to be restructured”.

He, however, pointed out that “if the nation disintegrate along the current zonal structures, SE and SS will go with their 25.07% and 70.6% of the current oil generated revenue.

“Also, if all the states flush the Igbo business men and women out, most of these states will lose between 30 to 70% of their internally generated revenue.

“At least 50 to 60% of import duties will be lost by Lagos ports while Port Harcourt, Onne and Calabar ports will be the beneficiaries.

“These are facts and not fiction.”

He also challenged any doubting Thomas to “Please publish your data for the oil revenue that is the engine that drives Nigerian economy today and show which zone has what.”

“Provide data to dispute the oil revenue data; that is what sustains most states and zones today,” he dared anyone.

He, then, went ahead to elaborate the reason for separatist agitation in Nigeria:

“The data below shows why people like me believe that the nation must be restructured. Anywhere you have cheating and injustice, there will be no peace.

“I wonder the criteria that the military used to determine the number of states, local governments and revenue sharing formula.

“I believe strongly that in a country, everybody should share from the resources that accrue to the nation. The sharing formula must be equitable and fair.

“In the case of Nigeria, it is clear that there is injustice and inequity.

“The data below showed that the South in general have been cheated in the scheme of things and the South East and South South in particular are being cheated than every other part of the country.

“The data below shows the contributions of each zone to the federal government and the share of each region.

“Based on this data and how the military distributed the local government, you come to the realization that some areas are being cheated.

“There is nothing wrong with Nigeria that cannot be fixed, but leaders must come with clean hands sit down and renegotiate the entire Nigeria estate.

“The data below is mid bugling and any sincere and honest person can see why people from the SE and SS are agitating for separation and or resource control.

“Also, the two largest and modern cities developed with the oil money from  SS and SE are Lagos and Abuja; one for the North and the other for the West.

“The East the produces 96.1% of the total revenue had none. Even if the nation breaks up today, the SS and SE are the zones that lost out in the scheme of things.

“As a stake holder of this entity called Nigeria, I am more convinced than ever that the country needs to be restructured now than later.

SOUTHEAST and SOUTHSOUTH GRAND TOTAL =98 only.

The question is: how dare you upstage this people in a vote?

Even if Southeast, South-south and Southwest joined together cannot upstage the North.

INJUSTICE OF OIL ALLOCATION IN NIGERIA (1)

“Working with the data from the office of the Accountant General as published by the Ministry of Finance (2013 April), the 357 LGAs of the 17 Southern states receive 45.1% of what they contribute is 100%.