Okonjo Iweala was sought after for the profitable and prudent businesses at a mega salary of £130,000 a year which is N53,690,000 per year in Nigerian currency.

The recent appointment will be her fourth international appointment since she stopped serving as Nigeria’s Finance Minister.

Recall that she had earlier been appointed last 2 years as Chairwoman of the board of GAVI Alliance, a public-private international organisation focused on healthcare.

The Switzerland based company with thousands of employees received over $1.5 billion donations from the Bill Gates Foundation.

Afterwards, and within the same week of the GAVI appointment, Madam Iweala also got appointed as a Senior Adviser at Lazard, an American international organisation which handles finance and asset management.

And last year, Ngozi was appointed as a member of the international advisory panel of Asian Infrastructure Investment Bank (AIIB).

And now, she has received her 4th international appointment from Standard Chartered PLC.

“Clearly this woman has no chills when it comes to money management.

“And those who know her worth around the world have refused to let her have some rest even at the age of 63 years.

“Funny enough, while governments and organisations around the world are hustling to hand over one assignment or another to Ngozi Okonjo Iweala, some persons in her home country Nigeria are claiming that she stole their money or at least mismanaged it and should be in jail.

“Funny how politics can turn intellectuals into world-class biased minds who spawn claims they can never validate.

“Congrats to this ever amazing woman.”

The Ankara-wearing Okonjo Iweala with her trademark head-tie has continued to receive international accolades before and after serving as two-time Minister under two different governments in Nigeria.

See the letter of appointment below: 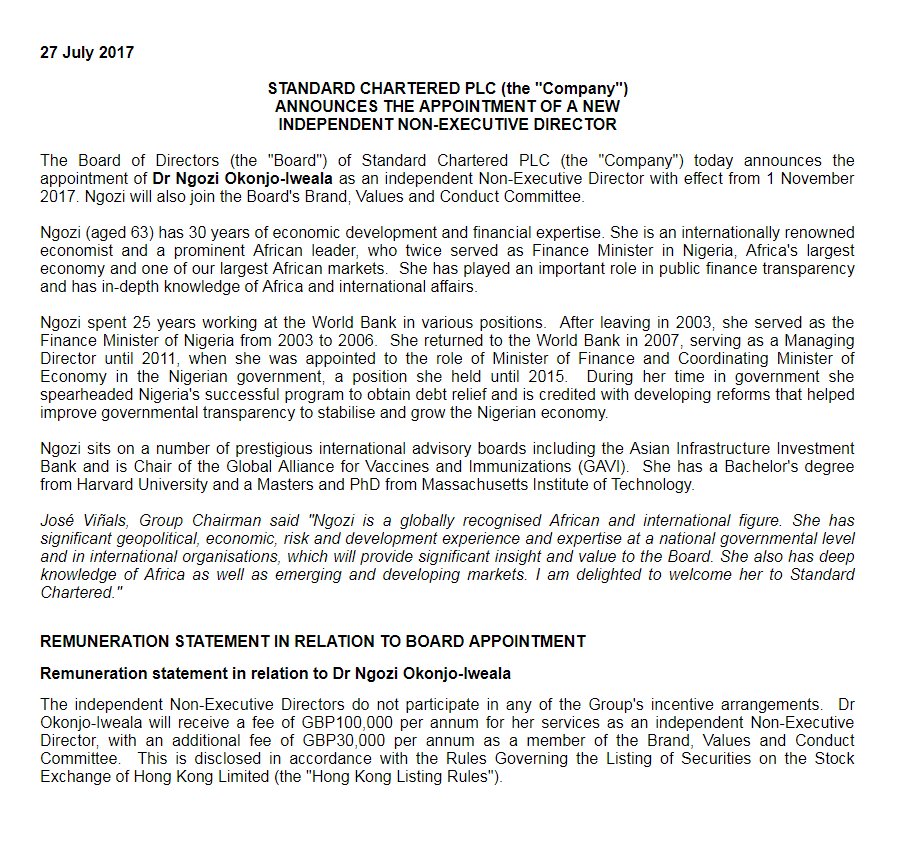 An Epidemic of Rape ~ By Olusegun Adeniyi