Okorocha and his habits: Yes it is true (pt. four) 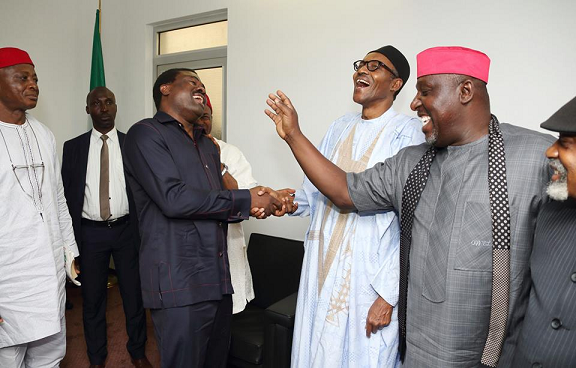 Almost was I distracted from this series, when President Muhammadu Buhari made an intentional blunder in his most recent political appointments. They were

not only big blunders but lopsided appointments.

The fact that we are supporting and campaigning for Buhari and his leadership does not mean we cannot call him to order when he goofs. I am very happy Nigerians quickly reacted, condemning his political actions which portrayed him an ethnic president who is out to “Northernize” our country by confiscating all the major positions for his Northern people. Trust me; I also joined those who poured their “venoms” on our dear president. Please Google my article entitled-“President Buhari: Honestly it is very unfair.” I will still follow it up with part 2, part 3, part 4 etc. as the case may be. The Nigeria of today has evolved from the Nigeria of yesterday. No section or zone should be treated as imbeciles.

Let me put it on record that the South East geo- political zone and to some extent South- South and, South West zones have far more credible people than the North. That is why when we notice a thief among us here in the South as a leader, we expose the person. This shows that the people of Southern Nigeria do not support corruption and corrupt leaders. Also, the resources of the people of South-East, South- South and South –West regions of this great country account for at least 85% of what is used to develop and manage the nation, yet President Buhari (with due respect to his office) has the temerity, audacity and effrontery to deny Southern Nigeria especially the South-east political appointments: and he expects us to be happy with him. No way.

Political appointments are given on merits, competence, integrity and credibility. It is also given to woo people for their support. Giving political appointments to the people of South east (for example), apart from provision of infrastructure and other dividends of democracy, would galvanize massive support from the people of the South east for President Buhari and his political party, APC. It will further build confidence on APC leaders in the South East. Therefore, those advising President Buhari should better sit up and see things from a broader prism.

Leadership is a complex module; it must never be abused under any guise. President Buhari must be told in clear terms that refusing to give major political appointments to the people of south east (while patronizing other zones) can be conversely viewed as an act of corruption. Also, allowing a particular part of the country to intentionally and always take charge of a particular sector, agency or government parastatal for a long time, is an act of corruption. For example, it is a notorious fact that in the last 40 years, the Comptroller General of the Nigerian Customs Service has always come from the North, even though the operational offices are located in the South. And I ask, is this fair?

The reading public should forgive me for being too cynical here. Let me now go straight and treat the actual topic for discourse in this piece.

Our articles and petitions exposing how Governor Rochas Okorocha and his cohorts loots the Local government funds and using the Local governments to obtain un- authorized loans which were later diverted into private pockets have started yielding fruits. The EFCC operatives were in Owerri, the state capital few days ago to carry out preliminary investigations on the fraud at the Local Governments. Also, the immediate past Local Government TC chairmen have been summoned to the Abuja office of the anti-graft agency. My job here is to open the minds of the reading public, open the minds of EFCC and other investigating bodies, including the Presidency, on areas to be thoroughly looked into, and force them to make their findings public.

Let me at this point warn the EFCC not to try any funny or hanky-panky soft landing deal for all those involved in the exposed fraud. Again, the EFCC should know that the exposed Local Government fraud has a direct link to the petition which I wrote on the 18th of February 2014, exposing the ex-speaker of Imo State House of Assembly, Rt. Hon Benjamin Chukwuemeka Uwajumogu. Please see the attached petition. But most unfortunately, due to the “Nigerian factor” the EFCC refused to treat the petition after its chairman (Mr. Ibrahim Lamorde) had an “Understanding” with Rt. Hon Benjamin Uwajumogu in March 2014 at Abuja. And to silence me, the said Uwajumogu and the Imo state government led by Governor Rochas Okorocha connived with the Shameless Imo State Police Command to accuse me of murder, after they failed to assassinate me on the 3rd of June 2014. I spent 11 months in prison before God rescued me.

Before I delve into part four proper, let me clear the issue of Rochas Okorocha owning private jets. His Senior Special Assistant on Media, Mr. Sam Onwuemeodo, in a bid to defend his boss has told another big lie, that Okorocha had private jets before becoming Governor in 2011. Perhaps, what the confused aide forgot to  add was that “Okorocha had the over 1.48 billion dollars reportedly found in his bank account in the United States of America, before becoming Governor in 2011. Sam Onwuemeodo should have also added that Okorocha never borrowed money from Chief Ifeanyi Uba (Capital Oil), Sir Emeka Offor (Chrome Consortium), Late Chief Benneth John Ihekire (Dekorkote paints), etc, to sponsor his 2011 governorship election.

The fraud perpetuated by Rochas Okorocha and his cohorts at the Local Governments is very alarming, as have already been exposed in the part 1, part 2, and part 3 of this series- Please see attached. To perpetuate these frauds, Governor Okorocha destroyed due process. For example, on his verbal instruction, road contracts were given out by ex- speaker Benjamin Uwajumogu, who was the head of the legislative arm of government. In the first place, this is very unconstitutional and an act of mis-placed responsibility by Uwajumogu. The details of these inferior road contracts, like, scope of work, contract sums, specifications, is (are) as directed by Okorocha. This is why 95% of the roads so far constructed have collapsed.

This was how ex- speaker Benjamin Uwajumogu and his colleagues abandoned their legislative duties and became road contractors. Rather than calling the Governor to order, they were busy inspecting road projects. Rather than doing over sight on the Executive arm of Government, they were doing oversight on contractors. Rt. Hon Benjamin Uwajumogu was the person giving out the road contracts, most of the times to themselves, their companies and to inexperienced contractors. The Ex-speaker’s Chief of staff (Mr. Kodichi Anamekwe) was part of the road contract syndicate in the state. Some of the road contract papers bore his signature and name. Uwajumogu so much abused leadership process to the extent that he even awarded road contracts to his aides, who collected money but abandoned the contract or refused to do the job. All these information are contained in my petition to the EFCC, forwarded on the 18th of February 2014, for which the EFCC chairman reportedly collected money from ex- speaker Uwajumogu and refused to treat my petition.

On the issue of N16 billion Naira loan, on behalf of Local governments in the state,  Governor Rochas Okorocha used the same fraudulent method he used to obtain the over N25 billion naira loan. This took place between the last quarter of 2011 and the first quarter of 2012. And it was the same Zenith Bank Plc that granted the loan.  The question now is; why Zenith Bank Plc all the time? Let the EFCC, ICPC, Force Headquarters and the Presidency provide the answer.

When the N16 billion Naira loan was granted by Zenith Bank Plc, Governor Okorocha changed to “gear two” and reportedly informed the then T.C chairmen that he would first release the sum of N200 million to each Local Government for their development. This amounted to N5.4 billion Naira. This was how the sum of N200 million was allegedly paid into the accounts of each Local government council. This done, Okorocha invited Speaker Uwajumogu and reportedly gave him the sum of N280 million naira to be shared to only 26 Honourable members, because Oguta Local Government had no representative at the Assembly then. 25 House members were to receive N10 million naira each while Uwajumogu was to take the remaining N30 million. The remaining money, which is the balance of the N16 billion naira, was finally shared between Okorocha and his kitchen cabinet.

It should be noted that less than two weeks after the sum of N200 million was reportedly paid into the 27  Local government council accounts, Okorocha changed his mind and directed that the money be called back, and rather controlled by the State Government. The then T.C chairmen, DAGS and treasurers can confirm this. This was how the N16 billion naira reportedly vanished into private pockets of Governor Rochas Okorocha and his cohorts.

The 27 General Hospital projects is another big fraud executed by Governor Rochas Okorocha, through his fronts. The hospital projects were reportedly shared among Deacon Chike John Okafor, Dr (Mrs.) Adaobi Obasi and ex-speaker Benjamin Uwajumogu. They in turn gave out the contracts for the projects to their chosen contractors and the funds for the hospital projects passed through them. Four years after, none of the projects have been completed, yet the funds that were mapped out for the projects, were more than enough to not only complete them but also to equip them with modern medical facilities. I stand to be challenged.

In the part three of this  series, I exposed how Governor Okorocha reportedly invited the immediate past TC chairmen of Local government areas and  the DAGS on the 26th of August, 2015 and pleaded with them to brain storm on how to “retire” the over N25 billion un-authorized diverted loan. Now that the EFCC has started investigation into Okorocha’s monumental Local Government councils frauds, illegal and un authorized bank loans, and the summoning of the past T.C chairmen to Abuja office of the anti-fraud agency, Okorocha has pleaded with the 27 Local Government council treasurers to join or assist the DAGS to “cook books” and retire the various funds and figures in contention. But the treasurers have reportedly told the Governor that since the funds did not pass through the Local Government council accounts, that it will be impossible to “cook the books”.

I will give further insight in the part 5 of this series.