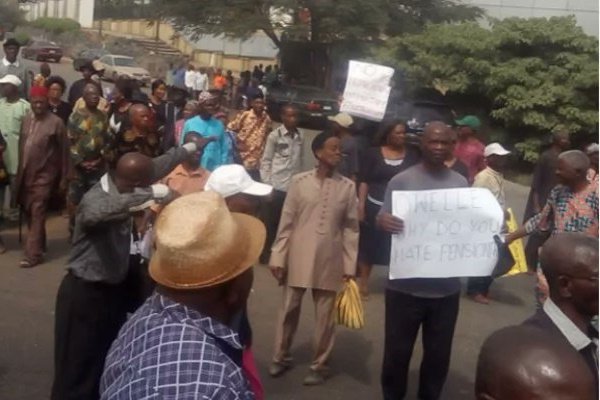 Elombah.com had, on Thursday, reported that Governor Okorocha, on Wednesday, hosted executives of the All Progressives Congress (APC) at wards, local governments and state levels.

He said the gesture was Christmas and New Year gifts for APC members in appreciation of their hard work and keeping faith with the party.

However, in a bizarre turn of events, Governor Okorocha turned and slashed pension arrears of pensioners by 60%.

Reacting swiftly, the aggrieved pensioners took to the streets to protest against Governor Okorocha’s policy.

They blocked the roundabout leading to the Government House in the capital city, Owerri.

The retirees are displeased that the governor wants to pay only 40% of their 13 months unpaid pension.

They argued that after presenting Prado Jeeps and Land cruisers to the Speaker and members of the Imo State House of Assembly, Okorocha was victimizing them by slashing their entitlements.

Not happy with the development, the pensioners took to the streets to express their displeasure.