Okorocha & The Many Misfortunes Of A Glorious State ~By Jude Ndukwe 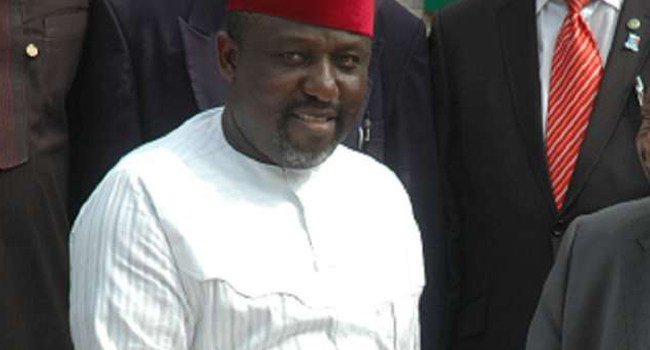 How Rochas Okorocha came to become governor of a highly sophisticated state like Imo State still baffles a lot of good-spirited Nigerians. More discomforting is how he was allowed to allegedly rig his way through for a second term.

It is even more troubling that the rascally governor has held on to power for this long without strong challenges to his excesses that have made him think himself an Emperor and act like Pilate who arrogated himself the power to condemn and to set free.

Part of why the long-winded governor has been able to hold on so long, we hear, is the practice of what is now commonly known as “Talk and Disappear” syndrome reigning in the state wherein those who dare to oppose the governor disappear mysteriously shortly after criticizing him and are never seen or are recovered dead.

It is said that a majority of the people are living in fear, afraid of unpleasant circumstances that might be visited on them by the wicked administration of the governor.

This is bad for a man who carries about mimicking laboriously great men like Martin Luther King Jr in his futile attempt to confuse Imo people that another humanist has come to their rescue. However events of the last six years have exposed Okorocha for who he truly is.

It is said that an empty vessel makes the most noise. Rochas is the best description of this saying. He spends tax payers’ money on appearing on live television every now and then pontificating to the Imo people on non-developmental matters and even matters that do not concern them in any way.

While he fritters the state’s funds on such frivolities just to massage his ego, he leaves the workers and pensioners unpaid for months despite having collected allocations in six years far more than what the State collected in all of its first twelve years of our current democratic dispensation.

He even slashed the pensions of the old by a whopping 60% and has refused to reverse it despite a court order to do so, yet, he would not cut down on the self-bloating expenditures on himself and his government. Hypocrisy of Pharisaic Order!

Upon this, he always has the temerity to talk down on the people at every given opportunity churning out one lie after the other claiming he has spoilt the people with projects. Checks on ground have revealed that such claims by Rochas are not true.

How on earth would Rochas claim that he has affected the lives of Imo people far more than the previous administrations in the state have done when put together. I just wish Dee Sam Mbakwe did not hear that, if he did, then Rochas’ case might be the worst for it.

The living may endure calumny and deceit, but the dead do not joke with their deserved respect when thrown in the wind the way the governor is doing.

If Only AGF Malami Would Learn To Talk Sparingly — By Ugochukwu…

Just like the Imo Air that disappeared straight into thin air only few days after it was commissioned amidst fanfare, Rochas is reputed to finish shabbily executed projects before engaging his brain.

For example, he is reported to have built a pedestrian bridge for students of Imo State University, only for him to turn around to demolish same in the name of road expansion.

The reason why a roundabout junction is reconstructed at an average of 2 times per quarter is still a subject of bewilderment to Ndi Imo.

This same roundabout is so massive that it has reduced the space left for motorists and pedestrians to use to the extent that it has become a motorists’ morgue as people keep dying there as a result of the defects in the design of the road.

All appeals to have Rochas correct the defects in order to save lives have fallen on deaf ears.

Many now believe the reason the governor would not have it redesigned and reconstructed is that it is an avenue for the collection of blood of the innocent to satisfy some deities the governor is said to pay obeisance to.

This is the reason it is said that the man actually acts before engaging his brain.

Can a people’s situation be worse than this?

There are roads whose constructions are kicked off with pomp and circumstance, media razzmatazz and much gibberish only for such roads to be stopped at distances not up to one kilometer from its beginning, not continuing to where they are needed most.

Are Imo people asking why Rockview Hotels (former Modotel) has now been marked for demolition by the governor?

Are people still asking questions about the N1.6bn JBros controversy for which he allegedly kicked out his former deputy, Jude Agbaso? Or have Ndi Imo allowed all these monumental scandals to just pass?

No other governor in the history of Nigeria has ever been as cryonic as the Imo State governor. With the appointment of his family members including in-laws into several sensitive government positions, Rochas’ intentions for the people of Imo State is very clear: