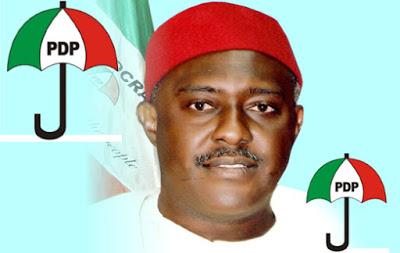 Ken Emeakayi and Olisa Metuh remains suspended. Any person, persons or group of persons transacting party business with the duo on behalf of the PDP Anambra State does so at his/her own risk.

Find attached a copy of their suspension on sundry charges.

SUSPENSION OF OLISA METUH FROM THE PARTY

Being the Communiqué of Anambra State PDP Executive Issued at Awka This 12th Day of August, 2015

At the 3rd meeting of the Anambra State Executive of the PDP in Awka this 12th day of August, 2015, the following issues among others were raised and the following decisions were reached:

2. The issue of a certain Ken Emeakayi who parades himself as the factional Chairman of the PDP in Anambra State was raised and the State Executive resolved that the said Ken Emeakayi seized being a member of the PDP in

2011, consequent upon his expulsion by the NWC at its 280th meeting (See Annexure A). That since the expulsion which was duly communicated to the party in the State and the then South East Zonal EXCO which initiated it has not been rescinded by the PDP NWC and NEC, Ken Emeakayi remains a non-member of the PDP in Anambra State, notwithstanding his masquerading. We therefore hold that the contraption headed by Ken Emeakayi cannot be and is not a PDP body. We reaffirm that Ken Emeakayi remains expelled from the party.

3. It is worthy to mention some of the allegations for which Olisa Metuh was suspended and for which we have asked the National Working Committee and the police to take action against Olisa Metuh and these are;

a. Embezzlement and diversion of over 100 Million Naira meant for Anambra PDP into his Company account PETTERGON NIG LTD. The Nigerian Police has concluded investigation, indicted him and recommended him for prosecution. See Arraignment notice as annexure B1 & B2, PDP Exco Committee headed by Amechi Onowu that indicted him as annexure C and PDP Exco that passed communiqué against him as annexure D.

b. He openly worked against re-election of Ex-President Jonathan after embezzling over 300 Million given to him by the Ex-President for publicity.

c. He publicly disrespected the Ex-President after our Party lost the March 28th Presidential Election. He even demanded for him to give account of his stewardship as Ex-President.

d. He goes about in meetings castigating the Ex-President and his Wife.

e. He seized from Nnamdi Nwangwu (Campaign Coordinator of Ex-President in Metuh’s LGA) and embezzled over 12 Million Naira sent to his Nnewi-North LGA meant for March 28th Presidential election and released not a dime out of it. The March 28th presidential election was executed financially and otherwise courtesy of some major stakeholders in the area.

f. Obtaining money under false pretense by submitting names of 25 persons as members of Anambra House of Assembly, thereby deceiving the presidency that they were statutory delegates (while they were not), hence used this fraud to collect over 260,000 Dollars meant for them during the Dec 2014 PDP Convention and embezzling same without giving to those persons he fraudulently used their names to collect this huge sum. See annexure E being the brochure that was used for national convention, this is contrary to article 33(1) (f) of our party constitution which provides that it is the members of the House of Assembly are statutory delegates to national convention. Please note that the 25 non-members of House of Assembly as of the time of the convention spans from number 44 – 68 of page 29 of the brochure attached as annexure F above.

g. Extorting hundreds of millions from Anambra PDP aspirants between Sept and Dec 2014.

h. In conjunction with the said Ken Emeakayi traded out our party in the January 2014 Chairmanship and Local Government Election in Anambra State, after Olisa Metuh with his stooge Emeakayi had embezzled and siphoned the sum of $500,000 US Dollars which he collected from the Ex-president Goodluck Jonathan (2014 January) for Anambra State PDP Councillorship and Chairmanship Candidates for January 2014 Local Government Area Elections. This led to PDP not clinching even 1 Chairmanship seat out of 21 seats because of lack of funds, he repeated same during the April 11th House of Assembly election. This led to our abysmal performance in which we won only 3 seats out of the 30 in the State).

i. Chief Olisa Metuh took over the function of National Organizing Secretary whose duty is to organize the conduct of congresses, unilaterally did same by advertising personally the said purported congress with only one day notice to Anambra PDP members on Thursday July 16th 2015 with information that congress will hold on Tuesday 21st July, 2015 when he knew that Friday and Monday are Sallah public holidays and the party faithfuls cannot pay in Diamond or Zenith Bank as stipulated in the publication. The publication is attached as annexure F. He organized the said congress by appointing his cronies Ike Abonyi and his Special Assistant one Colet Odenigbo as congress appeal committee chairman. He also presented his personal assistant one Sam Ben Nwosu who has been extorting N500,000 from each stakeholder to write their wards Exco list for them.

j. Diversion and non-remittance of over 30 Million Naira from the PDP NWC being the 10% and 5% which accrued to Anambra State Chapter and 21 LGAs Chapters respectively from sales of forms in last nomination exercise of the Party. Till now, he has not remitted this huge sum to the Anambra PDP.

4. The EXCO noted with dismay a publication in the SUN Newspaper of Wednesday, 12th August 2015 by a faction of the PDP in Anambra State purporting to suspend Comrade Tony Nwoye, Dr. Tony Macfoy, Prince Ossy Ezenwa and other notable stakeholders in Anambra State Chapter of the Peoples Democratic Party (PDP) who have labored to reposition the party and to create an enabling environment for the grassroots to also have a say and contribute positively and responsibly to the democratic process in Anambra State.

5. The State EXCO states without equivocation that the authors of the purported suspension publication lack the locus to speak on matters concerning the PDP in Anambra State. These are people especially Ken Emeakayi who are discredited and are facing charges for murder and sundry criminal offences in the High Court of Anambra State, Aguata Division to be precise. However, these are the people Olisa Metuh are hands in gloves to cover up the monumental fraud and embezzlement which he has perpetually committed against the people of Anambra State.

6. Finally, the State EXCO urges the teeming members of the PDP in the State to disregard the shenanigans of these desperados whose stock in trade is to betray the suffering party members for filthy lucre and remain steadfast as the present leadership shall reposition the party to take over the state in the next election.

Kindly find attached signatories to the above resolutions.

Acting Chairman, PDP Board of Trustees

Pioneer Chairman, PDP Board of Trustees

A reversal of the ideology of ‘African time’