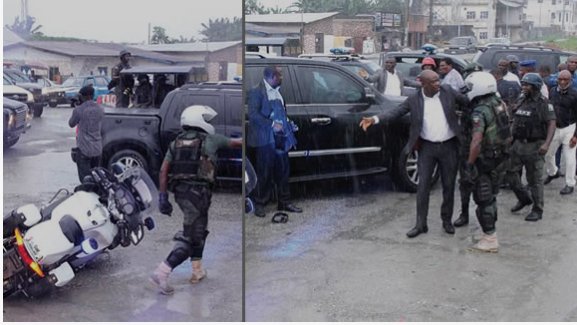 I remember in 2003 when I was doing my IJMB programme at RIVCAS now Rivers State polytechnic during the electioneering campaign.  Odili of PDP the then governor was seeking reelection and Awuse of APP was gunning for Odili’s seat.

Odili was coming from campaign at Obigbo while Awuse was going there to campaign and the two convoy met on a bad road that one must wait for the other to pass first. The two can’t drive through at the same time.

Odili as a sitting governor had security that can bulldoze Awuse and his street urchin boys out of the road for him to pass but he told his convoy to clear one side for ‘his majesty’ Awuse and his boys to pass.

Awuse boys starting shouting and singing victory song that just as they moved him out of the way, they will do same with election and kick him out of Brick House port-harcort.

That incident taught me something about Peter Odili, “MEEKNESS” which is power under control. Its  power that says, i can but I will not because there is no need. Odili was full of it. He was more like IBB Maradona styled leadership.

After April election that year, Gov. Odili did not just win, but he won with more number of votes than the number of registered voters. As usual, Awuse patrolled court rooms till supreme court and they kept knocking him out based on technicality. We all know what happened. Odili had to use his power he didn’t use on him at  Obigbo.

Wike should have allowed Amaechi have a field day, it wouldn’t have reduced him nor his powers in any way rather it will make him stronger.

To think that two of them were mentored by same Odili and none of them picked his political meekness surprises me.