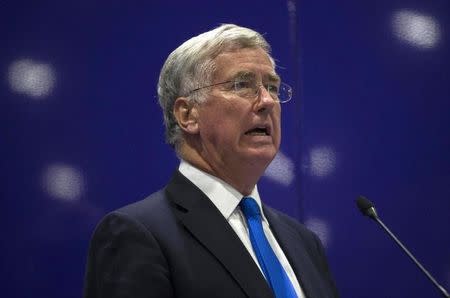 LONDON (UK) – Only one in 20 Russian air strikes in Syria are aimed at Islamic State targets, Britain’s defense secretary said on Saturday, warning that Vladimir Putin was instead killing civilians to shore up President Bashar al-Assad.

Russia bombed Syria for a third straight day on Friday, mainly hitting areas held by rival insurgent groups rather than the Islamic State fighters it said it was targeting, and drawing an angry response from the West.

In an interview with the Sun newspaper, British Defense Secretary Michael Fallon said the vast majority of Russian air strikes were not aimed at the militant group at all.

“Our evidence indicates they are dropping unguided munitions in civilian areas, killing civilians, and they are dropping them against the Free Syrian forces fighting Assad,” he said. “He’s shoring up Assad and perpetuating the suffering.”

Prime Minister David Cameron has said he sees a strong case for conducting British air strikes against Islamic State in Syria, but he wants to make sure he has enough support in parliament to gain approval.

He lost a parliamentary vote on the use of force in Syria in 2013. Consequently, British bombing so far have only targeted Islamic State in neighboring Iraq.

Fallon said Putin’s actions complicated the situation in Syria, but the British government had made progress in persuading lawmakers from the opposition Labour party to back strikes in Syria. It would be morally wrong not to do so, he said.

“We can’t leave it to French, Australian and American aircraft to keep our own British streets safe,” he said.

Putin’s decision to launch strikes in Syria marks a dramatic escalation of foreign involvement in a civil war more than four years old, where every major country in the region has a stake.